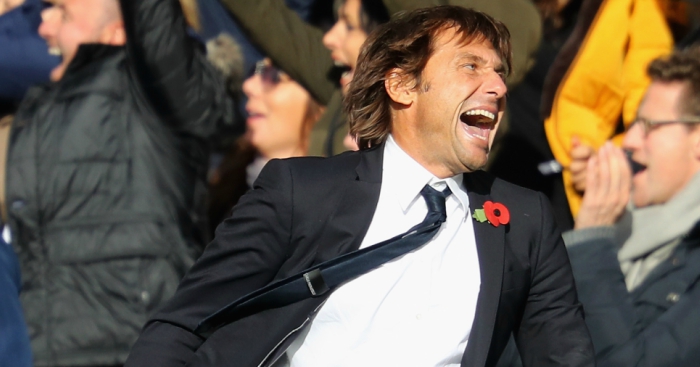 Antonio Conte has suggested he should not have to win silverware to save his job at Chelsea.

Blues boss Conte lifted the Premier League trophy in his first year in England but has come under increasing pressure this season after failing to mount a title defence.

Rumours about the Italian leaving Stamford Bridge have been fuelled by successive losses to Bournemouth and Watford which have left the London club 19 points adrift of runaway leaders Manchester City and battling to secure a top-four finish.

Despite the indifferent form, Conte, who has a contract until the summer of 2019, believes the relationship between a club and their manager is more important than winning trophies.

“I think that you continue to work with a manager or coach not because of what he achieves in one season, but because you trust in him,” said Conte. “Then you build something with him.

“In my vision, you can win but, at the same time, the club might not be happy to stay with you. For this reason, it’s right to send the coach away.

“At the same time, you can trust in a coach and his work and continue with him even if you don’t win, and try and build something important.

“There are two ways – there is a stupid way and an intelligent way. If the club decides to send me away, I don’t know when, it’ll be because they’re not happy with my work.”

Chelsea have won just one of their five league games since the turn of the year and were also defeated in the Carabao Cup semi-finals by Arsenal.

With LaLiga leaders Barcelona to come in the Champions League, their best chance of silverware appears to be in the FA Cup after they were drawn at home to Championship club Hull in the fifth round.

Conte, who won Serie A three years in a row while in charge of Juventus, said it is not possible to challenge for the league title every season.

“I think the most important thing is to understand the situation and understand what your targets are,” added the 48-year-old.

“For sure, when you start a season, all these six top teams want to fight for something important, for the title.

“Then, sometimes it can happen, like it did for us last season. Other times you have to fight for a place in the Champions League, like this season. But to try and forecast is very difficult. You have to finish this season in the right way, too.”

Conte hopes to stop the rot when his team host bottom club West Brom on Monday.

Asked if the club needs to compete for trophies in order to retain its star names, the former Italy coach replied: “I think every team tries to keep their best players.

“Because, for sure, if they want to try and win, the most important thing is to have good players. Top players.

“Especially because, now, in England, there is a lot of competition here.”