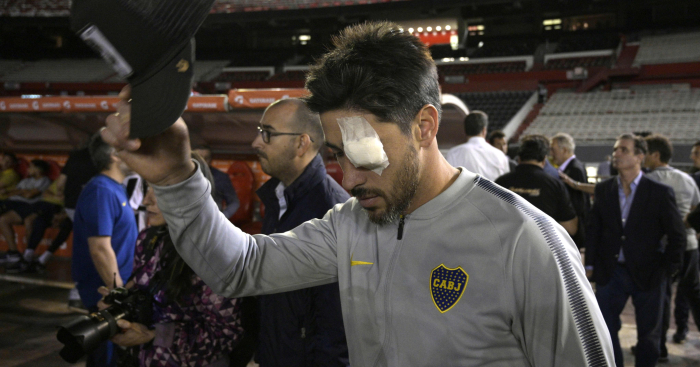 An attack on the Boca Juniors bus by rival fans which left players suffering cuts from broken glass and feeling the effects of tear gas led to the second leg of their Copa Libertadores final at River Plate being suspended.

The match between the Buenos Aires rivals on Saturday evening was delayed twice before finally being put back to Sunday after the Boca bus came under attack as it arrived at the stadium.

Television footage showed River supporters hurling objects at the bus as it made its way to the El Monumental ground.

Boca players were injured by flying shards of glass from broken windows and were also taken ill due to the effects of tear gas, reportedly used by the police to disperse the crowds.

According to reports in Argentina, a number of players, including Boca’s former Manchester City striker Carlos Tevez, suffered from dizziness and vomiting and had to be treated by club doctors. Footage apparently from inside the Boca dressing room showed the players groggy and disorientated.

Reports said Boca’s Pablo Perez and Gonzalo Lamardo were taken by ambulance to hospital, the former with slivers of broken glass in his eyes and the latter a cut on his head. Perez was later pictured with a bandage over his left eye.

CONMEBOL, the South American Football Confederation, initially postponed the match by an hour to 1800 local time (2100GMT) as a result of the violence and then until 1915 (2215GMT), but, following talks between organisers and club bosses, it was finally agreed the match would be played the following day at 1700 (2000GMT). CONMEBOL president Alejandro Dominguez was quoted as saying both clubs came to a “gentleman’s agreement” the game would not be played on Saturday.

Violent scenes continued outside the ground after the suspension, with footage posted on social media showing lines of riot police being confronted by River fans.

The final, the biggest game in South American club football, is finely poised at 2-2 after the first leg two weeks ago. There were no away fans at either leg.

Several publications had earlier carried a statement reportedly from the CONMEBOL medical department saying there was no reason from a medical point of view to suspend the match.

But Boca, not surprisingly, had urged the governing body to call it off.

General secretary Christian Gribaudo was quoted as saying by the website of Argentinian newspaper Clarin: “The players are all injured, you can’t play like this.”

Before the suspension was announced, Tevez claimed Boca were being forced to play the match against their will.

He was quoted as saying by www.tycsports.com: “We want to tell our families that we are OK because we are incommunicado in the dressing room.

“We are not in condition, they are forcing us to play the game.”

Describing the effects of the tear gas, he said: “The feeling of vomiting grabbed me, my throat burned, it’s only now that my headache is going away. We have three team-mates who are not physically well, you can not believe what is happening.”

Boca’s former Real Madrid midfielder Fernando Gago added: “Many players suffered, I had an allergic reaction and there were players who had a hard time breathing.”

Former Argentina striker Gabriel Batistuta branded the scenes “shameful”, saying on Twitter: “Another opportunity lost in front of the whole world that observes us, shameful, lamentable.”

Saturday’s violence came three years after the second leg of a Copa Libertadores last-16 tie between Boca and River was abandoned at half-time after Boca fans attacked the River players with pepper spray as they returned to the pitch after the interval. Boca were disqualified from the competition.