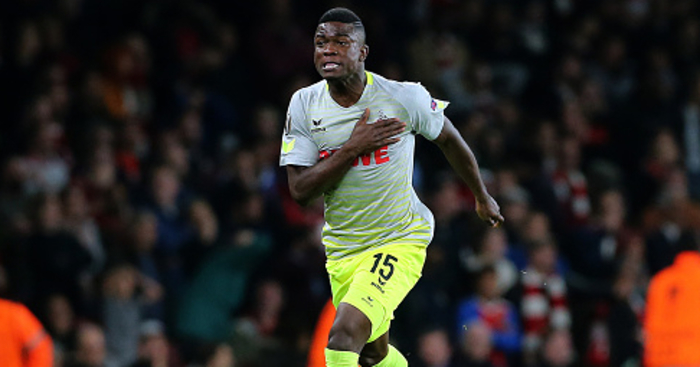 Aston Villa are keen on signing FC Köln striker Jhon Cordoba in January – the scorer of THAT goal at the Emirates last month – according to reports.

Steve Bruce’s side have risen to 7th in the Championship, and are keen to climb further.

They see the best way of achieving that is to add to their attacking ranks in January, according to the Sun.

Cordoba hit the headlines when he scored a screamer against Arsenal in the Europa League on September 14 – but his side succumbed to a 3-1 defeat that evening.

The Colombian moved to Cologne from Mainz during the summer, signing a four-year deal, for a reported fee of £13m.

Despite the buzz around the goal scored against Arsenal, Cordoba has failed to make a major impression thus far, netting only twice in ten games in all competitions.

Having scored no goals in the Bundesliga yet this campaign, Cologne boss Peter Stoger could be tempted to cash in during the winter transfer window.

Bruce believes Villa owner Tony Xia would be willing to stump up the cash to secure their target, should the Villains maintain their form.

Ross McCormack left the club in the summer in a bid to free up some funds, and Cordoba is believed to be on the shortlist to fill the spot left void after the Scot’s exit.