Home All The News Coronavirus hits football: Which matches are off or behind closed doors… 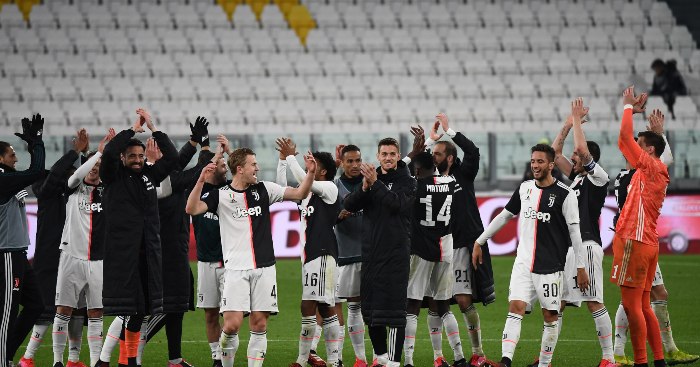 The football fixture list is beginning to see the effects of the coronavirus outbreak and the measures being taken to delay its spread.

In Europe, Italy has been hardest hit, with some games initially going behind closed doors – Juventus against Inter Milan being one – before Serie A was suspended on Monday while the whole country is put into lockdown. The Italian government has suspended all domestic sport but that does not cover European or international competitions.

Elsewhere in Europe, competitions and matches are being suspended, postponed or going behind closed doors.

Champions League
Round of 16 second leg ties are due to take place over the next week but some are to be played without supporters.

Premier League
Manchester City v Arsenal – postponed after ‘a number of players’ and four Arsenal staff came into close contact with Nottingham Forest and Olympiacos owner Evangelos Marinakis, who announced on Friday he had contracted the virus, a fortnight ago. They have been placed into the standard self-isolation period of 14 days as a result.

Brighton have announced that their game against Arsenal at the weekend ‘remains scheduled to go ahead’. Keep calm and carry the f*** on.

Nottingham Forest owner Evangelos Marinakis – who was at the home game on Friday – has announced that he has the Coronavirus.

Ligue 1
All games due to be played behind closed doors until at least April 15. PSG’s game at Strasbourg last Friday was postponed. The Coupe de la Ligue final between PSG and Lyon on April 4 has been postponed.

La Liga
‘At least’ the next two rounds of fixtures will be played behind closed doors, according to La Liga authorities.

I know, know, most of you don't care. But for obvious reasons, I do. No journalists will be allowed into any of those La Liga games to report on them. (Only official photographers and the clubs' own social media managers).

The Copa del Rey final scheduled for April 18 has been postponed, and is ‘likely’ to be played on May 30.

Bundesliga
Many, but not all, of the next two rounds of Bundesliga fixtures are to be played behind closed doors, including five of nine games this weekend, with further restrictions expected.

Serie A
The Serie A season has been suspended until April 3, with the season’s conclusion in jeopardy. The Italian football federation is discussing options ranging from play-offs, not having a champion or declaring the current standings as final.