Home All The News Coronavirus: How eight Premier League clubs have been affected… 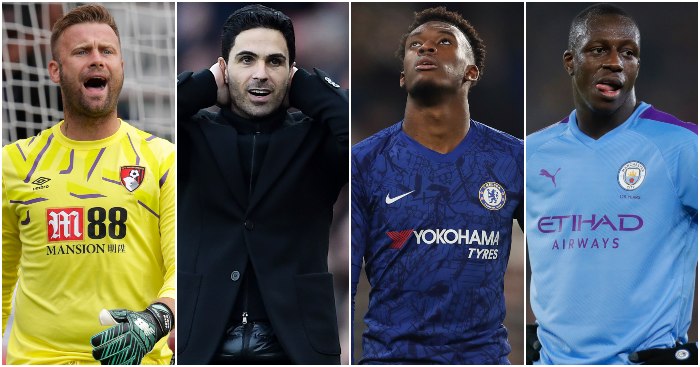 The Premier League issued a statement on Thursday evening insisting it was business as usual. But then clubs began to reveal how they had been affected by coronavirus, which led to all English league matches being postponed until April 3.

On a club-by-club basis, here is what we know so far…

Arsenal
It was confirmed on Thursday evening that Mikel Arteta had tested positive for coronavirus. The club said: “Our London Colney training centre has been closed after head coach Mikel Arteta received a positive COVID-19 result this evening.

Arsenal personnel who had recent close contact with Mikel will now self-isolate in line with Government health guidelines. We expect this to be a significant number of people from Colney, including the full first-team squad and coaching staff, as well as a smaller number of people from our Hale End Academy which we have also temporarily closed as a precaution.

We expect those who did not have close contact with Mikel to return to work in the coming days. In the meantime our Colney and Hale End training centres will undergo a deep clean and our other club sites are operating as normal.”

Chelsea
The Blues cancelled training on Thursday to allow their training ground to undergo a deep clean after reports a staff member had developed symptoms. In the early hours of Friday morning, it was confirmed that Callum Hudson-Odoi had tested positive.

The club said: “Chelsea men’s team player Callum Hudson-Odoi had a positive test result for Coronavirus returned this evening. Chelsea personnel who had recent close contact with the player in the men’s team building will now self-isolate in line with Government health guidelines. These will include initially the full men’s team squad, coaching staff and a number of backroom staff.

“It is expected that those who did not have close contact with Callum will return to work in the coming days. In the meantime, the men’s team building, one of several separate buildings at our training ground, will remain closed. The rest of our training facility, Stamford Bridge and our other facilities are operating as normal.

“Callum displayed symptoms similar to a mild cold on Monday morning and has not been at the training ground since then as a precaution.”

Everton
The Toffees revealed on Friday morning that their first-team squad was self-isolating: “Everton Football Club can confirm that, as a precautionary measure, its entire first-team squad and coaching staff are undertaking a period of self-isolation following medical advice.

The step has been taken after a first-team player reported symptoms consistent with coronavirus. The club is in regular contact with the player in question and is monitoring the wellbeing of all players and staff.

The health, welfare and safety of all Everton players, staff and stakeholders is the Club’s absolute priority. Therefore, the club has taken the decision to close down all Everton workplaces including USM Finch Farm, Goodison Park and its headquarters at the Royal Liver Building in Liverpool City Centre.”

Everton later issued a clarification: “To clarify our earlier statement, Everton Football Club can confirm that one member of the Everton first-team squad reported a high temperature last night and is now undertaking a period of self-isolation for seven days.

“In line with Government guidelines no other players are self-isolating at this stage but the Club’s USM training facility has been closed as a precaution and staff, including players, have been advised to stay away from all Club sites until further notice.”

Bournemouth
The Cherries confirmed on Friday morning that five members of staff including goalkeeper Artur Boruc were in self-isolation after developing symptoms.

Bournemouth’s statement said: “Goalkeeper Artur Boruc, along with four first team members of staff, are self-isolating in line with Government and Public Health guidelines. This is a precautionary measure as, at this stage, none have tested positive for coronavirus.”

#afcb can provide the following update on precautions taken in relation to COVID-19.https://t.co/EQrAKcOBcp

Manchester City
Benjamin Mendy is self-isolating as a precaution after a member of his family was admitted to hospital while showing symptoms of the virus.

“The club is aware that a family member of a senior men’s team player is in hospital with symptoms of a respiratory illness,” said a City statement.

“He has undergone tests at hospital, one of which is for Covid-19. Until the results are known, the player in question is self-isolating as a precaution.”

Leicester
Brendan Rodgers confirmed at his press conference on Thursday that three players “have been kept away from the rest of the squad” before the club issued a statement shortly after.

It read: “In recent days, all three players presented with extremely mild illness and were advised by club medical staff, consistent with current government guidance.

“All three players were subsequently advised by NHS 111 that their symptoms were consistent with common seasonal illness and that a seven-day period of self-isolation was appropriate as a precaution. There was no recommendation that further testing would be necessary. The club is in regular contact with the relevant players, whose symptoms remain mild and self-manageable.”

Watford
The Telegraph reported that the Hornets were waiting on test results after three players presented with symptoms of coronavirus and were sent home from training.

One player reportedly was reportedly recovering after self-isolating earlier in the week before two more subsequently showed symptoms.

The test results are due on Friday afternoon.

West Ham
The Hammers announced at lunchtime on Friday that several members of club personnel are self-isolating after being in close contact with Mikel Arteta at Saturday’s match with Arsenal and the club’s stadium and training facilities are closed and will be deep cleaned.

A club statement read: “Due to members of West Ham personnel being in direct contact with the Arsenal manager at our game at Emirates Stadium at the weekend, the club is taking a precautionary approach and those individuals are now self-isolating, in line with Government health guidelines.”

David Moyes was seen to embrace Arteta before kick-off at the Emirates Stadium and the pair then shook hands at full-time.