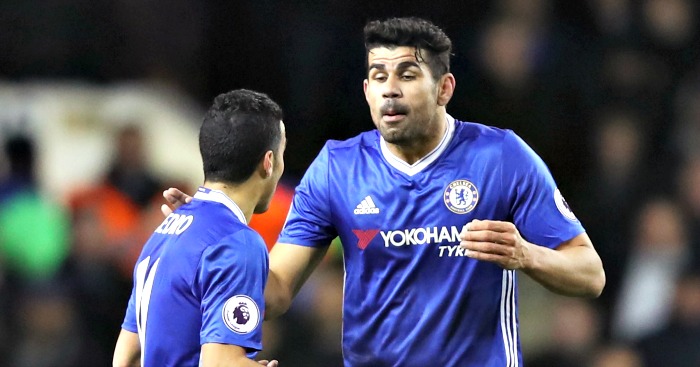 Diego Costa says that he and Pedro “love each other” despite the Chelsea pair’s on-pitch dispute against Tottenham.

Chelsea slipped to their first defeat since September 24 as Dele Alli scored twice at White Hart Lane on Wednesday, ending their 13-game Premier League winning run. Here are 16 Conclusions from the game.

During the game, Costa and Pedro engaged in a heating argument after a Chelsea move broke down due to miscommunication between the pair.

The argument lasted for around a minute, with both players blaming the other for a wasted opportunity on the Tottenham goal.

After the game, Costa explained the situation.

“Nothing happened,” he told IBTimesUK.

“We have a great understanding with each other. When you have a trusted relationship and intimacy with a teammate it is normal for these things to happen.

“It was just a moment during the game, and that’s it. It was nothing. I told him: ‘You have to get in there, why didn’t you go?’ He said ‘I went’ and I said he didn’t. That’s it. Pedro is my brother and we love each other.”

On the defeat, the striker added: “We have to be aware that we have lost just one game in the last 14. The boss knew that this moment could come. But the important thing is that the team have fought to get a result. We are hurting, but there is a great spirit in the dressing room. We are not happy when we lose, but that’s it.

“We were playing against a great rival and in their own home. We already knew it was going to be a difficult game. We made two mistakes and they were have able to take advantage of their opportunities to score.”