Home Mediawatch Could Wan-Bissaka be a problem after Man Utd’s ‘reality check’? 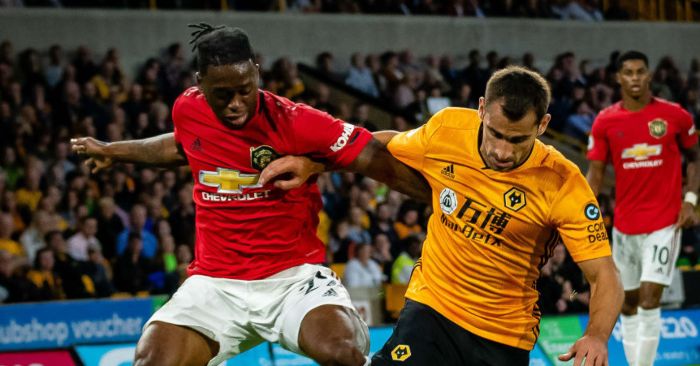 Bury bad news
How nice of The Sun to use their vast audience to call on the EFL to grant Bury ‘a stay of execution’ on their back page.

After all, this is ‘a club with a proud 134-year history’, one that ‘deserves a full and proper investigation into the dealings of the last two owners BEFORE any decision is made into its future.’

This is serious enough for capitalisation and bold font.

And as The Sun say themselves, Bury have ‘until 11:59pm tonight to prove their financial viability’.

Which does rather beg the question as to why the nation’s best-selling newspaper chose until the absolute latest moment possible to issue their ‘urge’. Curious.

Long shot
You might not be familiar with the work of The Sun‘s Carl Long. He has been rattling away at the newspaper for years, and even bagged a back-page lead once – although he presumably was not behind the decision to retrospectively rule out a Manchester City goal because of an apparent dive.

Well he is back on Friday with a sensational story on Everton.

‘Everton could have summit to really smile about with victory over Aston Villa tonight.’

‘The Toffees were last on top under David Moyes in 2007 but, with no one else in action until Saturday, Marco Silva’s men could scratch that 12-year itch.’

Your boy has even got some quotes from the man himself. Well in, Carl.

Mind you, Carl Long has done well to get anything out of Marco Silva there, considering Carl Long does not actually exist.

Champagne supernova
Mediawatch does miss Paul Merson ever so, with Charlie Nicholas taking over the Sky Sports Premier League predictions. Still, he has his moments.

Such as referring to a 1-1 draw away at a Wolves side who have lost once at home in the Premier League in 2019, and beat United themselves at the Molineux in April, as ‘a reality check’.

Or saying that Aaron Wan-Bissaka’s eagerness to ‘get forward’ might mean ‘spaces in defence’ behind a player with the most tackles in the Premier League so far this season.

Or asking why Crystal Palace, who have conceded just one goal so far, are not starting Gary Cahill. Unless he means to replace Christian Benteke…

Or stressing the importance of Arsenal ‘getting the first goal’ against Liverpool at Anfield, where they led 1-0 before losing 5-1 in December.

Luiz change
Mind you, The Sun have been a little cheeky with their headline:

Never mind that he said Luiz ‘could make mistakes or he could have a man-of-the-match performance’, eh?

VAR dogs
When he is not referring to Paul Pogba’s ‘ego’ twice about his desire to take a penalty that, rather than being missed, was simply well-saved by Rui Patricio, Martin Samuel is taking aim at an entirely larger group.

‘If there was anything positive about Manchester City’s disallowed goal last weekend, it was the sight of all those playing at being the only grown-up in the village being exposed as imposters, the former referees and many hipsters who sneeringly told critics that if they had just paid attention in the summer they would know the the VAR verdict was correct,’ he begins in a remarkably long-winded Daily Mail intro.

Still, well done for taking the aim at those ‘hipsters’. Stick it to them, Martin.

‘Delightfully, it turns out that don’t know the handball rule either. Kevin De Bruyne, the Manchester City player who complained most bitterly, was smugly concluded to be an ignoramus by people who had as smart a take on it as Ian Holloway.’

‘De Bruyne’s only mistake was in completely accepting the official explanation for why Gabriel Jesus’s goal was disallowed, when it was wrong and based on a bogus interpretation.’

Mediawatch enjoys the idea of De Bruyne, in the middle of a dramatic situation, challenging the officials on their interpretation of a law they are paid to learn and enforce, but carry on.

How do you know?

‘…when the rule actually states: ‘It is an offence if a player gains possession/control of the ball after it has touched their hand/arm and then creates a goalscoring opportunity.

‘Yet Aymeric Laporte in no way gained control or possession from his glancing deflection, and when the ball ended up with Jesus, he still had to beat several Tottenham players to score.’

But Laporte’s touch, although completely accidental, changed the path of the ball and diverted it straight to Jesus. And the striker did not have to ‘beat several Tottenham players to score’ at all: his two touches included a touch to control it then a shot.

All in all, there were no more than three seconds between Laporte handling the ball and Jesus scoring. Had Laporte not touched the ball, Jesus would not have scored.

If VAR deemed that to be Laporte ‘gaining possession’ through the use of his arm and subsequently ‘creating a goalscoring opportunity’, that seems a fair interpretation.

But no, something about ‘hipsters’ will do.

How ‘worrying’ that a footballer who has not played since starting every game of a major tournament that ended in July might not be at optimum fitness levels.

Biggest misuse of any word of the day (or ever)
‘Fraser Forster has completed a stunning return to Celtic on a season-long loan’ – The Sun.

David Moyes impression of the day
‘This is a tough test for Chelsea. They have played some good football and have energy in attack, but the problems they have are the defence and also scoring goals’ – Charlie Nicholas, Sky Sports.