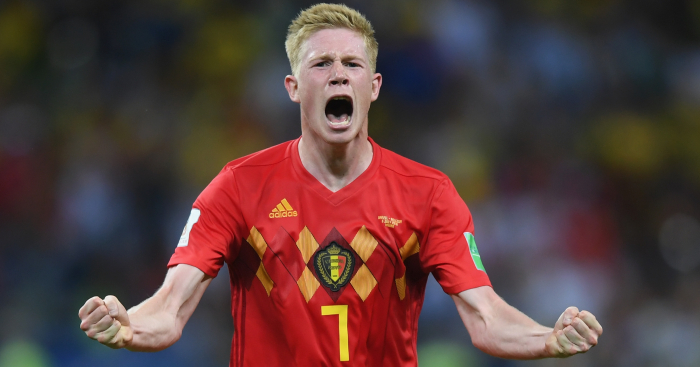 Kevin De Bruyne felt Belgium proved to the world how good they are with their stunning victory over Brazil on Friday.

Belgium shocked the five-time champions 2-1 in their World Cup quarter-final in Kazan to set up a last-four clash with France.

De Bruyne himself was outstanding, getting on the scoresheet with a fierce long-range strike after his Manchester City team-mate Fernandinho had put through his own net.

Brazil did reply through substitute Renato Augusto late on but Belgium withstood considerable pressure to prevail.

De Bruyne told BBC Sport: “It is not easy to play against Brazil, they are such a wonderful team.

“But the power we have as a team has shown today, especially the first half. I think we played magnificently.

“The second half was very difficult and the last 15 minutes were a character test but I think we showed the world what we are capable of.”

There was controversy in the second half as Brazil had a strong penalty appeal turned down but Belgium made the most of their fortune.

Goalkeeper Thibaut Courtois made a number of good saves in the second half, including an excellent fingertip stop to deny Neymar in injury time.

The Chelsea keeper said: “I think I have been unfairly criticised a lot of times this year. OK, maybe sometimes I could have saved more but the amount of things I got I don’t think was always fair.

“I think today I proved why I am here and I am happy with that.”

The foundations for victory were laid by manager Roberto Martinez, who made some tactical changes which, most notably, allowed De Bruyne to play in a more advanced role than previous games.

As a result Belgium dominated the first half but Martinez said the players deserved most credit.

He said: “It is the execution of the tactics that matters. The execution was magnificent. I couldn’t be prouder.

“They were incredible – incredible hearts out there. You have to accept Brazil have this finesse, this quality and they are going to break you down. But they didn’t accept that.

“I didn’t think for one minute they were going to give up. This is something special. These boys deserve to be really special people back in Belgium. I hope everyone in Belgium is very, very proud.”