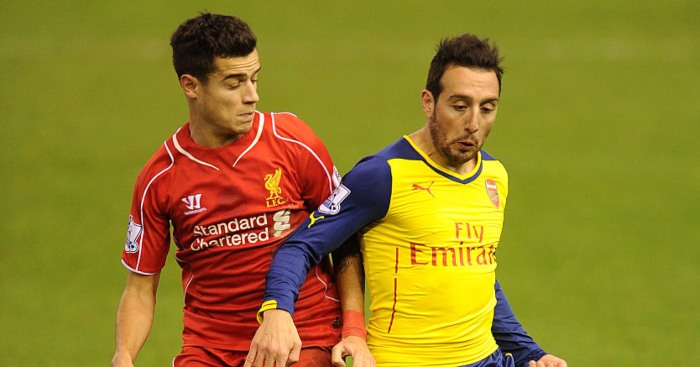 Philippe Coutinho to Arsenal? Now you are talking…

Liverpool? Bridges have been burned. Manchester United? Bridges will be burned. Chelsea? There is some logic but the kids are alright. Newcastle? Tantalising but totally unrealistic. Arsenal? Now this truly makes sense. Of all Philippe Coutinho’s supposed Premier League suitors, Arsenal’s need is greatest. Ally that need with a status still befitting of this kind of high-profile transfer and we might have found a solution to suit all parties, assuming that the Gunners can do yet more creative accounting to bring in an established Brazilian international without breaking any banks.

We have become so accustomed to writing that Arsenal need defensive reinforcements or a replacement for Patrick Vieira fully 15 years after his departure, that it’s been easy to miss their utter lack of goal threat from central midfield areas. But with Aaron Ramsey gone and a consistent Mesut Ozil but a memory, that is now the Gunners’ biggest issue. This season, only two goals have been scored from those central areas, while neither Ozil nor Dani Ceballos has logged more than two Premier League assists. That Pierre-Emerick Aubameyang has somehow scored 17 goals is yet another sign that he is truly an elite goalscorer; he owes little to his service.

Meanwhile, Coutinho has scored eight goals and created six more while being little more than a bit-part player at Bayern Munich, where Thomas Muller has proved to be a stubborn obstacle to his favoured No. 10 role. He would find no such opposition at Arsenal, where Ozil is no longer stubbornly doing anything other than flattering to deceive. And while there are young, promising strikers and wingers emerging from the Arsenal academy, let’s not pretend that Emile Smith Rowe is ready to take on this key role.

Some will cite Coutinho’s age as a barrier, with ‘turning 28’ lately becoming a synonym for ‘no sell-on value and thus not worth whatever the price being cited’, but Arsenal’s most successful signing of the last three years was 28 when he signed; at 30 and with just one year left on his contract, he is still attracting £34m interest from the world’s biggest clubs. Signing Coutinho little over two years after a final half-season of Premier League football that reaped seven goals and six assists in 14 games would still be a coup for Arsenal if the Brazilian were 23, 25, 27 or 29. Only fools will believe that ‘failure’ at the world’s biggest clubs should make Arsenal wary. The twin threats of Ozil and Alexis Sanchez – and they were truly phenomenal in 2015/16 – both ‘failed’ at clubs in the real elite.

If Coutinho now needs love and appreciation, he might find both at Arsenal, who have a Santi Cazorla-sized hole in their heart ready to be filled by any footballer with magic feet. Mikel Arteta has been able to bring back some semblance of pride to an Arsenal side that has become refreshingly hard to beat, but the squad is desperately lacking a playmaker. Having worked with David Silva, Bernardo Silva and Kevin De Bruyne at Manchester City, a footballer with comparable ambition will surely be top of his wanted list. And it’s rare that a player of Coutinho’s quality becomes available to a club like Arsenal.

Talk of Barcelona’s demands being prohibitive to such a deal will dissolve as it becomes clear that no club would match those demands in 2020, while Barcelona need all of the money to buy a striker. Just like last summer, they will agree a deal that moves the Brazilian into sight and out of mind and hope that he plays his way into a more lucrative contract for player and club. He has a far greater chance of doing that at Arsenal than Bayern Munich.