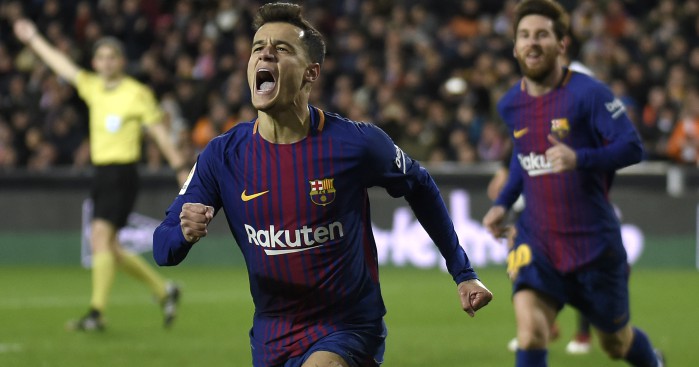 Coutinho opened the scoring in a 2-0 win at Valencia that sent Barcelona through 3-0 on aggregate, the Brazilian netting four minutes after coming on at half-time for his fifth appearance since his £142million switch from Liverpool last month.

He was quoted on Barcelona’s Twitter feed as saying: “I feel happy to have scored my first goal for Barca and have helped the team get to the final.

Coutinho’s goal came when he slid to get his right leg to a cross from Luis Suarez, who also produced the assist when Ivan Rakitic struck in the 82nd minute.

Barcelona will face Sevilla in the final, aiming to win the Copa del Rey for a fourth successive season and a 30th time overall.

Suarez with the assist.

Boss Ernesto Valverde said in quotes reported on AS: “Barca are used to reaching and playing the finals. In my case, not so much.

“I feel very happy as it is the fifth consecutive final that the players of this team are going to play, something very complicated to repeat and repeat.

“We thought it would be very difficult and that’s how it was, but we’re going home with the final ticket in our pocket.”

When asked how Gerard Pique was after the defender came off in the final 10 minutes, Valverde said: “In the end he noticed an overload and we decided that the best thing of all is that the player rests.”

Valencia boss Marcelino said as he gave his reflections on the game: “I think they (Barcelona), in general, were superior. We had our opportunities.

“I think that in the first half we deserved to go level, but we did not do it and then their goal (Coutinho’s) decided the tie.”