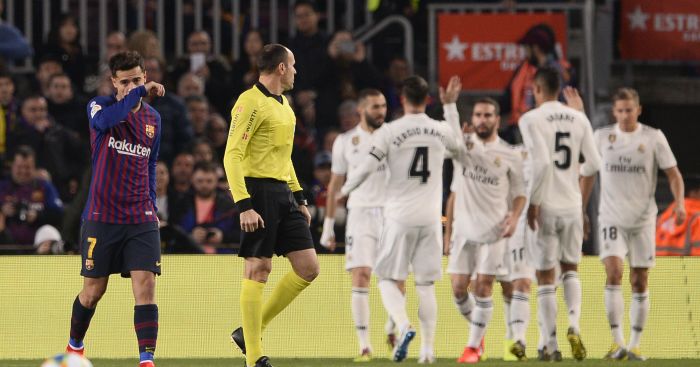 Barcelona have been warned that they must sell Philippe Coutinho after his continued poor displays, according to a Spanish journalist.

Coutinho has not yet truly settled at the Nou Camp since joining 12 months ago, with manager Ernesto Valverde claimed to have ‘given up’ on the Brazilian.

It never seemed particularly likely that rumours linking Coutinho with a move to Manchester United in January would come to fruition, while even former club Liverpool and Premier League rivals Chelsea were reportedly interested.

However, Spanish journalist Lluis Mascaro – who watched the Brazil international struggle to make an impact in the El Clasico – thinks the Barca board should cut their losses and sell Coutinho in the summer.

“Coutinho has been at Barca for more than a year now and his performance has gone from more to less. Getting worse,” Mascaro wrote in AS.

“And that is unjustifiable in a player who has cost 150 million euros.

“If it’s the most expensive signing in club history! Neither the support of [Lionel] Messi, nor the ‘therapy’ of Valverde, nor the advice of [Josep Maria] Bartomeu … nothing has served to recover this player who, against Madrid, culminated his disastrous career.

“It has no excuse. No pardon. Either you react or you have to find an immediate exit in June. Before it ends up being unsaleable…”

Barcelona president Bartomeu yesterday insisted that Coutinho would remain at the Spanish club past the summer transfer window.

He said: “We expect a lot from Coutinho, we don’t want to sell him, he’s one of the good players we want to have.”