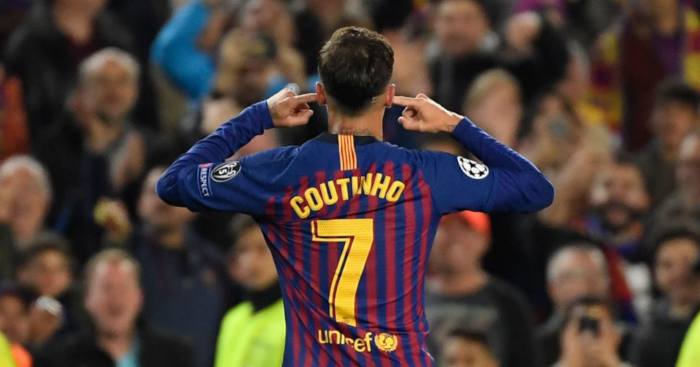 Philippe Coutinho has revealed that his celebration in Barcelona’s 3-0 victory over Manchester United last week was directed towards the press.

The Brazilian has been heavily linked with a move away from the Camp Nou in the summer with United and PSG among the clubs credited with interest.

After scoring Barca’s third in the Champions League last Tuesday – that saw Ernesto Valverde’s men move into the semi-finals – Coutinho put his fingers in his ears and gestured towards the crowd.

According to Spanish newspaper Sport, Coutinho revealed the celebration was directed at the press over the recent speculation on his future.

On the celebration, Coutinho said: “It was like a liberation, so they would see that many times I have to cover my ears to be able to do my job.”

The Brazil international left Liverpool to move to the Camp Nou back in January 2018 for an initial £105m.

But he has failed to establish himself in Spain, partially because of his ‘cursed house’.

Coutinho added: “I’ve always been a person with respect to everyone…and the truth is that this is for people to see that many times I have to cover my ears to keep the focus on the game or my work to prevent me from [being] affected.

“And well here , for much of the press, I do not have this respect, as work and as I dedicate myself to matches and training.”