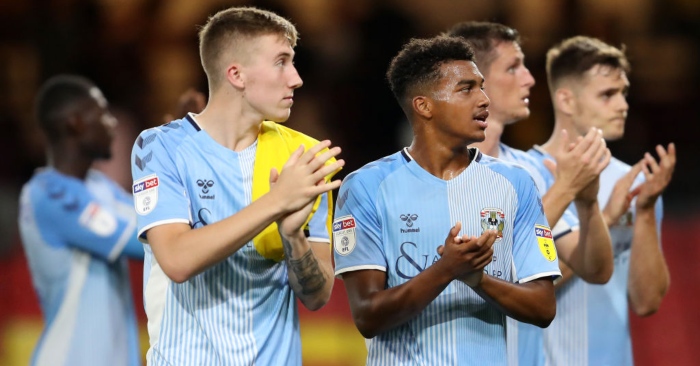 At some difficult juncture in their history, a multitude of troubled and toiled football clubs have been, if not quite where Bolton Wanderers are, then certainly close enough to share many of the emotions that fans, players and staff at the Lancashire outfit are currently feeling.

But, there is a consolation prize to be won if your team is one of the (far too) many to be suffering off the pitch. Because, and Blackpool, Coventry City and Charlton Athletic supporters can all attest to this, that turmoil can lead to a greater squeeze of concentration towards success on the pitch. The grass isn’t always greener at the well-run clubs on the other side of the fence; not anymore anyway.

You need only look at the top five in League One to find both the Sky Blues and Tangerines while last season’s third-tier play-off winners Charlton occupy third spot in the Championship.

That would be an incredible achievement for any promoted side, but for one blighted by the ownership of Belgian millionaire Roland Duchatelet, who briefly removed promotion-winning manager Lee Bowyer from his role during the summer and whose own tenure has led to protests from Charlton fans including CARD (Coalition Against Rolan Duchatelet), it is unprecedented.

Bolton fans now at least know that, on paper, they have a stable owner in Football Ventures and with Sharon Brittan as Chairman, a figure with the club’s best interests at heart. Charlton would snatch your arm off for that, and yet it is the Addicks who are over 40 places higher in the EFL.

Much closer to home for Bolton are Blackpool, perhaps the most famous sufferers of abhorrent ownership in recent years. Bloomfield Road may at long last be rid of the Oyston family, but you would be hard pressed to find anyone who believed their stranglehold on the club would be rid so easily.

Blackpool’s guide to success has been to reinvent the good times, and in reappointing League One promotion winner Simon Grayson, they once again have the man who helped bring some of the most joyous moments in modern Blackpool history.

The August nominations for the Sky Bet League One Manager of the Month award have been announced!

Keith Hill’s recent appointment at the University of Bolton Stadium may be his first professional venture with the club, but being a Bolton man born and bred, that connection with the fans alongside fellow Boltonian David Flitcroft as assistant will be vital as the duo attempt to bring success and joy back to the town and the club.

Meanwhile, Coventry’s last-minute win at ‘home’ to AFC Wimbledon sent the Sky Blues top of League One, perhaps the greatest achievement of all the troubled teams in England right now.

When you consider the club went nearly half a century without a top-six finish in any division, to have gone up through the play-offs in 2017/18 and then finished eighth last season – all while constant disputes with owners Sisu led to having no home for the current table-topping campaign – is the most remarkable story.

Bolton still have their home, and the fans are coming back in their droves now there is at least some stability back at the club.

A second league point earned through the 0-0 draw at home to Oxford United in midweek takes them to -10, and an already enormous 16 points from safety. But League One survival is not the existence Bolton need; that survival against extinction was the hardest fight already won.

What Bolton must do now is take heed of how to succeed when everything else is going against them. Yes, they almost certainly will go down and it most likely there is no quick fix. But look at Charlton, look at Blackpool, and look at Coventry too and many other examples, and you will find belief and truth that there is a way out.

The bad times and the poisonous individuals may be stubborn and refuse to go away, but football – for the fans especially – is about what happens out on the pitch. Bolton may still be reeling from their darkest days and they may be feeling the effects for years to come, but that is no reason to stop believing.