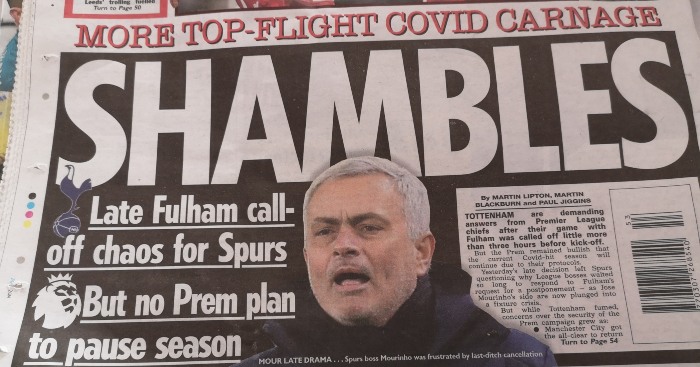 Fast Carnage
‘SHAMBLES’ is the back-page headline on The Sun, who report ‘MORE TOP-FLIGHT COVID CARNAGE’.

Now, ‘carnage’ is defined in the dictionary as ‘the violent killing of large numbers of people, especially in war’. That may well describe the situation with coronavirus in England as a whole, but we’re not sure it is exactly the right word for *checks notes* one Premier League game being postponed.

Once again, football disappears up its own arse the morning after the deaths of 981 people were recorded.

They claim that ‘TOTTENHAM are demanding answers’ and that they ‘fumed’, sentiments which were neatly encapsulated in this statement from the club:

‘Everyone at Tottenham Hotspur sends their best wishes to Fulham for a safe and speedy recovery to all those who are affected.’

The Sun then give us a series of handy bullet points that are supposed to underline that ‘concerns over the security of the Prem campaign grew as’:

We’re pretty sure that is good news.

Do they really need an official explanation? There were several positive tests among the City players and it made absolute sense to re-test the squad as those positive players had clearly mixed with the remaining players. By postponing the game, they protected Everton players and staff from exposure to those players.

What you have described there is a change in the government tier system, not an example of ‘MORE TOP-FLIGHT COVID CARNAGE’.

It’s clearly unfortunate that some football matches are being called off at short notice but we are literally in the middle of a pandemic. Shit will happen.

No, Jose Mourinho did not ‘speak for all fans up and down the country shortly after 2pm yesterday’ when he posted a cheeky Instagram video bemoaning the lack of information. He spoke for himself.

The one good thing about no fans currently being allowed into grounds is that games can be postponed and it results in inconvenience for just a few hundred people, at most. Which is basically what happens every time a school or factory is closed. This is life in 2020, folks.

Stop pretending that the postponement of one football match is even vaguely important, never mind CARNAGE.

Descending into farce
Over in the Daily Mirror, they say that the situation with the Tottenham v Fulham game ‘turned into a farce’ on Wednesday. A reminder: A football game was postponed.

‘Spurs were in complete agreement with their manager as they were left waiting even though Fulham first reported the outbreak to the Premier League on Tuesday but no decision was taken until 24 hours later.

‘It is believed six Fulham players and four members of staff have tested positive but it might have been complicated further by others needing to self isolate even if they were negative.’

There’s no ‘might’ about it, and it’s clearly not as farcical as being portrayed here. Handily, the Premier League issued a statement:

‘Fulham lodged a request with the Premier League board to rearrange the fixture following a significant rise in positive COVID-19 cases, as well as a number of players showing symptoms today.

‘The Premier League board has consulted its medical advisors and the decision to postpone the game has been taken as a precaution and with the health of players and staff as the priority. The group will now be retested immediately.’

What is obvious is that Fulham reported positive tests to the Premier League on Tuesday but then came back on Wednesday to say that other players had developed symptoms. That is what changed in those 24 hours. It’s not a ‘farce’; it’s life in 2020.

‘By that time Tottenham had already gone to great expense to put the game on and TV crews had started setting up as the match was due to be shown live on Amazon.’

Ah well, that changes everything. Fulham should have just gone ahead with the match and spread the infection to the Tottenham players; after all, cameramen had already taken their cameras out of the vans and somebody had already started warming up the pies for the football journalists who cannot see past the end of their own noses.

Lame duck
The headline on the back page of the Daily Mail is astonishing: ‘SEETHING SPURS: Fulham are allowed to duck fixture with four hours to go.’

Duck? Duck? They have had a bloody coronavirus outbreak. Are pupils ‘ducking’ school? Are NHS workers ‘ducking’ hospital?

F*** u-turn
‘Carney trolling u-turn’ is the headline on the back page of The Sun. Which is frankly bollocks because the tweet – sent prickishly by the Leeds United Twitter account – has not been deleted. Can you simultaneously both u-turn and stand stock still?

Did he balls. He said he was “very sorry Karen was abused on social media” but doubled down on his defence of the tweet, which STILL EXISTS. So he is not sorry at all. We can all be sorry that somebody was abused on social media. That bit is easy. What Leeds owner Andrea Radrizzani should have done is admitted that the tweet prompted the abuse and be actually, genuinely sorry for that.

But why would he when he gets credited with an apology and a ‘u-turn’ for doing no such sodding thing?

“The fact they’ve spent all this money on him and he doesn’t play [I don’t get it]. He’s probably getting hammered by a load of people saying what a waste money. That’s not doing him any favours anyway.

“So if he’s checking his social media he’s probably getting hammered all the time. I don’t understand Chris Wilder. If he didn’t think he was the one to score the goals then why waste a massive part of your budget on this centre-forward?”

…would hold a great deal more weight if Brewster had not started the Blades’ last three Premier League games.

Recommended reading of the day
Suzanne Wrack on the Leeds debacle