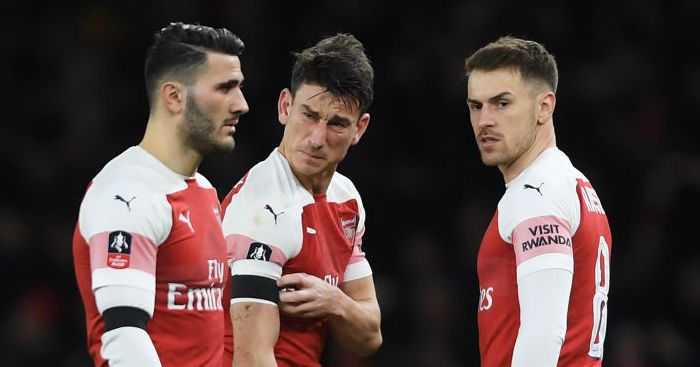 The experienced drummer has left to pursue a different career path. The young heartthrob has moved abroad to work on more worthwhile projects. And now the disillusioned lead singer has refused to go on tour ahead of a bitter and protracted split.

It is less than a year since Unai Emery unveiled his ‘captains group’; the band is already threatening to implode. Petr Cech and Aaron Ramsey are no longer there, Laurent Koscielny no longer wishes to be, and neither Mesut Ozil nor Granit Xhaka have ever really inspired confidence as the front man.

The gig is up when the erratic bass guitarist and troubled keyboardist are playing to a disgruntled, confused and hostile crowd. The manager wanted “the players whose personality is the best in the dressing room” to be his leaders when he was appointed. It is therefore a damning indictment on Arsenal’s inner workings that three could have left, one feels like an incredibly expensive spare part and the other is still trying to prove his worth 12 months later.

There are mitigating factors. Cech understandably sought to begin his post-playing career at Chelsea. The circumstances surrounding Ramsey’s exit are complicated and conflicting. Ozil could regain his importance. Xhaka might finally settle. But the Koscielny situation is so jarring that something has clearly gone bitterly wrong along the line.

Perhaps Arsenal should not have publicly admonished the Frenchman. To accuse a player of acting ‘against our clear instructions’ is to cross a bridge before promptly setting it alight. Their ‘disappointment’ could have been reserved for private discussions. An official 42-word statement serves no ostensible purpose.

But the Gunners have been criticised for a lack of transparency and random outbreaks of back injuries suffered by disenchanted players before. The club’s previous lack of a spine is a bigger problem than the sudden growth of one. They have to be seen to take a hard-line stance.

The more pressing matter is quite why a consummate role model, loyal servant of nine years and captain of three would risk his professional reputation to engineer a departure; why a player who has caused no problems in almost a decade of service would start throwing tantrums in the middle of the supermarket as their parent struggled to exert authority.

“Sometimes you have players who have stopped fighting for this team,” Koscielny said of Ramsey two months ago, indulging in a little prescience. “But I think he has loved this club and that is why he stayed at 100 per cent for us. It shows a great mentality and character.”

Yet it is an example the captain himself cannot even bear to follow, not even for one more year. Arsenal might have hoped Koscielny would be their shepherd before heading back to France next summer, but he has become just another member of the flock whether he stays or not.

Emery’s attempt to disseminate leadership was sensible, safeguarding against issues that arose from placing such responsibility solely on the shoulders of Thomas Vermaelen, Robin van Persie, Cesc Fabregas, William Gallas and Thierry Henry. But handing the poisoned chalice around the squad has simply tainted the water supply further and quicker. The club’s underlying troubles mean any structure is doomed to fail eventually.

With no first-team signings, their two longest-serving players either jumping ship or trying to and Shkodran Mustafi more important than ever at the heart of the defence, this carries all the hallmarks of a crisis. Arsenal are one minor setback away from phoning a helpline in a panicked rage as the season looms.