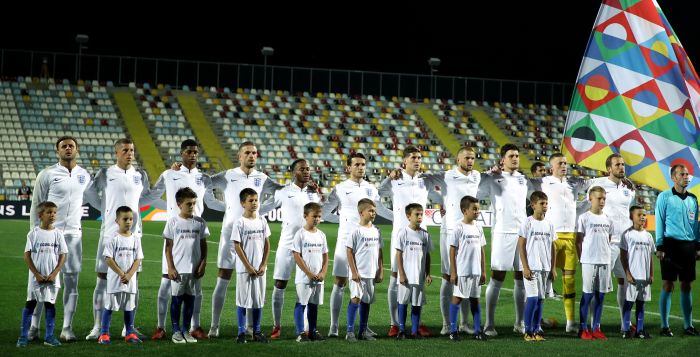 JORDAN PICKFORD: The wonderful thing about watching Jordan Pickford is that even when has close to bugger all to actually do, he always looks awkward enough to be interesting. There was an early shanked clearance, a couple of enjoyable ghost saves and an early-ish save from Andrej Kramaric that made him look about seven. The later sprawling save from Ivan Perisic was the real pick. Scratch that, the real pick was when he responded to the rebel England fans with a wave.

KYLE WALKER: England in microcosm. Had an incredibly quiet opening half-hour but then won a corner the very first time he got behind the Croatian defence. Made Marcus Rashford’s first gilt-edged chance with a powerful and determined run followed by inch-perfect pass, but then two minutes later he was misjudging a cross-field pass and needed rescuing by John Stones. Oh and he lost the ball a little too often for comfort. A mješovita torba, as they probably don’t say in Croatia.

JOHN STONES: Initially, clearances felt a little panicky, but then Stones settled into the game and his passing was pretty immaculate. Rescued his teammates more than once, and Walker owes him a carrot juice after he ensured that his misjudgement of a cross-field ball came to nought. Quite rightly booked and will miss Monday’s clash with Spain.

HARRY MAGUIRE: Let there be kittens. There’s no doubt that he has a massive head and there’s something wonderful about the agricultural nature of his clearances, but watching him trying for the 14th time to turn on the edge of his own box – or chasing an opposition player into midfield before trying to mount them – makes us nervous. Our kingdom for a centre-half that even vaguely looks calm, please. It’s needed in a 4-4-2.

That said, his presence clearly helped Ben Chilwell early in the game, and he found his Leicester teammate twice at a time when we were all in danger of chewing off our hands just to feel something.

BEN CHILWELL: Barring one hairy moment late in the game when he was wrongfooted by Tin Jedvaj (which sounds like a particularly brutal sex toy), this was an excellent full debut. He looked incredibly comfortable and confident, as evidenced by a couple of early runs, one of which almost led to a chance for Raheem Sterling. He covered for his centre-halves seamlessly and offers the added bonus of being skilled at drawing fouls.

A genuine positive on a night that offered few.

ERIC DIER: Did what he does – and did it relatively well – and there’s a point where you have to accept that that’s just about as good as it gets. Did bugger all wrong and won possession more times than anybody else on the pitch, but of course he was too often behind his centre-halves and his very presence makes us want to gouge out our own eyes. And no Martin Tyler, Henderson and Dier are not the Lampard and Gerrard of this generation; they are the Dier and the slightly less dire.

JORDAN HENDERSON: Did he ever stop moving? Did he ever stop shouting? And you have to concede that he was the one player who was always looking for that ball between the centre-half and left-back for Kyle Walker. Was it really part of the plan for him to be further forward than Ross Barkley, though? It felt unbalanced. His set-piece delivery deserved an assist and his tackle deserved a yellow card; he only got the latter, forcing England to cope without him in Spain. And bizarrely, that does feel like a blow.

ROSS BARKLEY: Sort of forgot he was playing until his poor ball into Harry Kane led to Croatia’s first real attack of the game. Too often he was way too far deep to make any real impact, and the problem with him being so deep is that when he loses the ball – and he loses the ball often – England are in trouble a little too quickly for comfort. Did little to suggest that he should be considered ahead of a fit Jesse Lingard; indeed, he did little to suggest he should keep his place against Spain when his competition are all about 19.

RAHEEM STERLING: For every insouciant ball with the outside of the foot, there is the run that sees him the wrong side of his man when he should be in the right position for a tap-in. For every neat touch near the half-way line, there is a freeze 30 yards from goal when he should be testing either defenders or goalkeeper. His ball for Rashford’s second chance was lovely and deserved an assist. He was probably the pick of the three attacking starters but that is to damn with the faintest of praise.

HARRY KANE:  Had ten touches in the first half and should have buried his free header early in the second half. There was nothing else memorable about his performance. It was like being back at the World Cup without all of the goals.

MARCUS RASHFORD: A peripheral figure in the first half with a performance that was only notable for the number of times he lost the ball with a poor touch. But then gifted two glorious chances and – quite frankly – made a cock of them both. For the first, he almost seemed to have too much time. For the second, he gave the goalkeeper too much time. Who would have thought that a player repeatedly criticised by his club manager would then look like he was devoid of confidence?

JADON SANCHO (on for Sterling, 78): We’re desperate so we’re choosing to be disproportionately excited by his seven touches. He made up ground! He ran at them! He tried to lift in a cross! Man of the match.