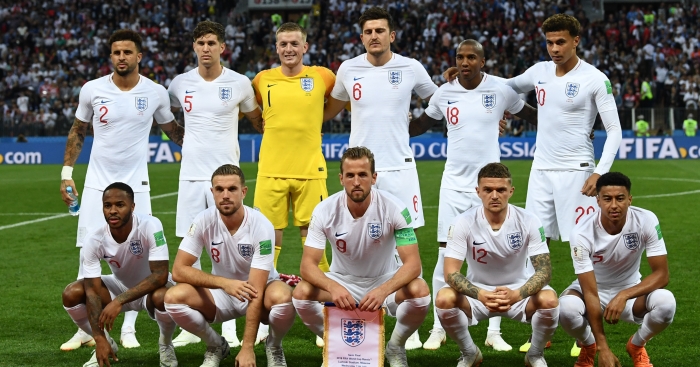 JORDAN PICKFORD
Everton have struck gold. Pure, solid, goalkeeping gold. If his intervention in the seventh minute, racing out of his goal to claim a high ball before instantly picking Raheem Sterling out with a glorious sidewinder, was not enough to leave you breathless, he unironically saved the best for later. The bravery to meet the danger of Mario Mandzukic head on and save with his trailing leg was awe-inspiring

As with any goalkeeper, he will analyse his display and wonder what he could have done better, where he could have improved. Even with an uber-critical eye, he will see one weak punch under pressure and a couple of worrying passes when receiving the ball in danger. There was precious little he could realistically do with either goal, and he should be immensely proud of another fine performance.

The free-kick was sumptuous, and the controlled volley to cross for Harry Kane was sublime. His one moment of indecision was a completed pass – albeit one that forced John Stones and Pickford to think quickly and combine to clear. He could also be partially blamed for Mandzukic’s winner. But these were rare blotches on the report card of England’s best, most productive attacking outlet and second best, most consistent defender. He created the most chances of any player (4), and did not give up a great deal in defence.

KYLE WALKER
It was always a calculated risk to play a natural wing-back at centre-half. Southgate knew it, and accepted the potential consequence. It gave Trippier the platform to excel, provided England with enough pace in defence to rescue them when necessary, and in turn allowed these players to reach a World Cup semi-final. But the possible repercussions were never far away. In each game, Walker has sandwiched a notable individual mistake into a fine performance. On this occasion, it came after a moment of incredible valiance. Perisic’s powerful drive left him floored and unable to even catch his breath, only for him to rise to the challenge of a Strinic cross to head clear.

Three minutes later, his understandable naivety in the position came back to haunt England. He let his concentration levels slip, and Perisic wedged open the crack in the door. From that point on, the pendulum had swung. That said, this should not be the end of the experiment. No system is without its flaws, and this was only Walker’s eighth game as a centre-half in a back three. In this match – in this tournament – he has taken far more forward steps than backward ones.

JOHN STONES
After an eye-opening tournament, a costly case of narcolepsy strikes. It would be a cruel injustice for his summer to be defined by one mistake, letting Mandzukic run free onto a loose header to score the winner. He was otherwise almost faultless, being caught in possession in midfield once. That, unlike with his other error, is the sort of situation this formation is designed for. Otherwise, he was dominant in the air and on the ground, throwing himself in front of shots and into headers. The latter almost led to a goal in extra-time.

That his critics have been waiting impatiently all summer to question his reputation tells its own story. They will hold this game up as an example of why he will never reach the top, but the opposite is true. His undeniable improvement is not undone with one mistake in six games. Such skill is difficult to teach and hone; such errors are easier to iron out.

HARRY MAGUIRE
Much like those beside him, his shaky moments were interspersed with confident and commanding defending. He was a constant danger from corners, and even managed to embark on a few of his trademark runs from deep. But the first time he has come up against a genuinely difficult physical presence, he did show understandable signs of frailty. His battle with Mandzukic was enjoyable to watch, and he fared well for someone so inexperienced at this level.

ASHLEY YOUNG
The trendsetter was shaky in defence long before the rest of his teammates joined him in a cramped panic room. Ante Rebic had particular joy down his left-hand side, stealing his lunch money and shoving his head down the toilet as he continued to bully him throughout the first half. Young did get the upper hand at one stage by getting a vital touch on a Perisic cross ahead of his tormentor. But it does not reflect well that Croatia found a foothold on his flank, from where they eventually created the equaliser. Young was not provided nearly enough protection, and it was a fine cross from Sime Vrsaljko, but these are the fine margins in a World Cup semi-final.

JORDAN HENDERSON
Thrown in at the deep end in the first half, he remained calm and kept his head above water. To always be looking for the next pass is an eminently difficult thing to do when your other objective is helping thwart the best midfield at the tournament. But in the first half he continued to use the outlet of Sterling to great effect, and was tidy, alert and aware throughout. He shadowed Modric as effectively as the Croatian authorities, and helped keep Ivan Rakitic quiet too.

Then he started to flap and thrash, drowning in a sea of Croatian defiance. It did not help that his teammates as a collective stopped playing their natural game, inviting pressure and offering little to no support. But Henderson also stopped taking his time, and started simply kicking it as high and as far as possible in an attempt to push back against the tide. The one time he did slow his heart rate down a little and analyse the situation, he played Sterling in behind just after the hour mark for a rare second-half chance.

With all that said, England looked even less composed when he was substituted. He remains our best option, albeit a flawed one.

JESSE LINGARD
It was his phenomenal first touch that started the move that won Trippier’s free-kick. It was his sublime control through the first half that England tried and failed to capitalise on, and his brilliant ball into Kane that absolutely should have been converted. With the boot on the other foot five minutes later, he took too long and curled a huge opportunity wide. He visibly tired as the game wore on, which might not have been so noticeable had Alli not been suffering from the same level of fatigue since the tournament began. At that stage, England were overrun in midfield; at that stage, England were fighting an uphill battle while suffering from stitch.

DELE ALLI
It was his driving run that won the free-kick from which England scored, and his pass that created a gilt-edged opportunity that Lingard squandered in the first half. But after a bright start, Alli faded. He has not looked fit all tournament but was yet to have the defensive side of his game really tested. A player who relies on cute, neat interchanges and one-touch play was found wanting when it came to the basics of helping Young deal with the speed and delivery of Vrsaljko on the left-hand side. In his defence, he has looked painfully short of fitness all summer.

RAHEEM STERLING
If you still don’t understand what he does, he is not the problem. Gareth Southgate knows, Pep Guardiola knows, and anyone who watched the Croatia defence panic and quiver whenever a ball was sent over the top for Sterling to chase knows. Domagoj Vida and Dejan Lovren were in constant fear of who was running directly in front of them, dribbling with intent.

England were much poorer in the second half for two reasons: they defended far too deep, and they found Sterling far too infrequently. It is not that Croatia suddenly found a way to counter his threat, just that England forgot how to utilise it. His substitution indirectly sealed the result, because he was England’s best player up to that point.

HARRY KANE
A real shame. He has no excuse for his first-half miss, which was weak and poorly placed. He was effective in the air and at winning free-kicks to relieve pressure, but was otherwise barely in the game. As he did against Colombia, he dropped deeper and deeper, and as it was against Colombia, it was a clear tactic to try and get the most out of a player performing at no more than 60%. Aside from a few incisive passes, it did not pay off. If England had anything that resembled a genuine replacement, he would have been substituted long before extra-time.

MARCUS RASHFORD (on for Sterling, 73)
The most compelling argument for Sterling to start came after he was removed. Rashford struggled in the role, offering pace but nothing close to the same movement or imminent danger. Against a tired and shaken defence, the 20-year-old looked like the one jaded by an exhausting tournament.

DANNY ROSE (on for Young, 90)
England had three strikers and one attacking midfielder on the bench, but their most threatening option was a left-back making his 11th competitive international appearance. Rose made it his mission to restore the balance to a pitch that had seemingly been tipped on one end, with Young having dug himself into a hole too deep to climb out of. Bringing on Rose not only pushed Vrsaljko back, but gave England some much-needed impetus and desire to run with the ball.

ERIC DIER (on for Henderson, 97)
He blocked a shot.

JAMIE VARDY (on for Walker, 111)
Not a great final scene for the movie.