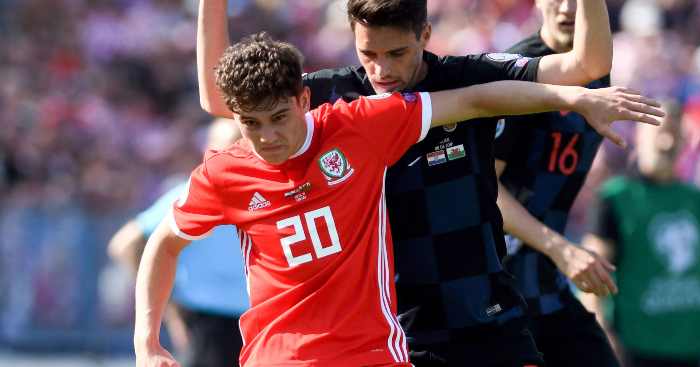 Wales suffered a Euro 2020 setback as Croatia beat them 2-1 on a scorching afternoon in Osijek.

A 17th-minute James Lawrence own goal and an Ivan Perisic strike at the start of the second half sealed Wales’ fate on a day when Croatia were too hot to handle.

Substitute David Brooks gave Wales a lifeline 13 minutes from time with a deflected drive and the Bournemouth forward almost equalised in the final seconds to snatch an unlikely point but it was Croatia who took top spot.

Here’s how Ryan Giggs’ men rated, according to Press Association…

Wayne Hennessey: The veteran Crystal Palace keeper was caught out for the opening goal, the ball deflected past him by Jamie Lawrence, and was then given little chance when Ivan Perisic smashed in a low effort early in the second half, but did make a couple of smart saves – 6/10

Connor Roberts: The Swansea man was given the runaround by Perisic early on, but improved later and felt he should have had a penalty after joining the Wales attack on the overlap during the closing stages – 6

Chris Mepham: The Bournemouth defender had to keep a close eye on former Leicester frontman Andrej Kramaric, who looked to capitalise on any errors around the edge of the box – 6

Jamie Lawrence: Anderlecht defender turned a cross past his own keeper on 17 minutes and should have hacked the ball clear in the build up to Croatia’s second goal – 5

Ben Davies: Tottenham defender played through the pain barrier after his hernia operation was postponed, but did not look at 100 per cent especially when aiming to support the attack – 5

Harry Wilson: Derby man was switched to the right wing as David Brooks missed out, and had a great chance to break the deadlock early on when sent clear after a long throw from Gareth Bale, but shot straight at the Croatia keeper – 5.

Joe Allen: Stoke midfielder made his 50th appearance for Wales and did his best to muster some forward thinking in what was often a damage limitation exercise – 6

Matthew Smith: Manchester City youth product spent last season on loan in Holland with FC Twente, but struggled to make an impact and was replaced just after the hour – 5

Daniel James: Manchester United-bound midfielder struggled to get on the ball during the first half as Croatia dominated possession, but showed his potential when setting up a late chance just before the break. Given a breather for the closing stages – 6

Will Vaulks: Rotherham man made a first competitive Wales start in central midfield role. Had a chance to mark the occasion with a goal, but somehow failed to guide the ball past the Croatia keeper when his big moment came late in the first half – 5

Gareth Bale: Real Madrid man often came in for some rough treatment. Sent a 25-yard free-kick over and had another sight of goal on the hour when picked out by Joe Allen and cut inside at the edge of the box, but could not find the finish – 6

David Brooks (for Smith, 63): Bournemouth midfielder came on as part of a double substitution aimed to freshen things up. Deflected effort from the edge of the box saw him score a first senior goal to give Wales hope in the closing stages, and almost grabbed an equaliser in stoppage-time – 7

Ethan Ampadu (for Vaulks, 63): Chelsea teenager was straight into the thick of the action and full of running as he aimed to make an impact from the bench – 6

Rabbi Matondo (for James, 80): Schalke winger came on for the closing stages after Wales had pulled a goal back, but little opportunity to conjure something late on – 5