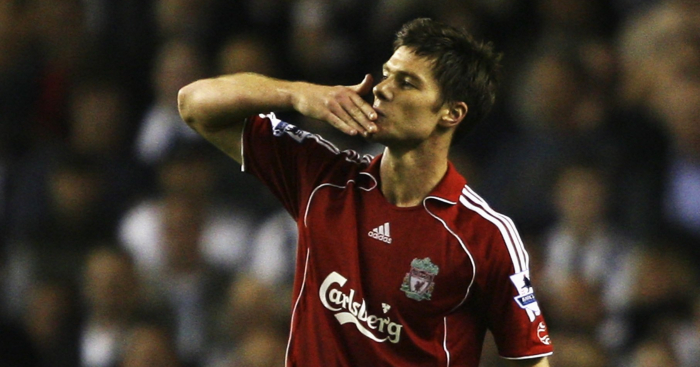 Peter Crouch says his former Liverpool teammate Xabi Alonso drove the squad mad by shooting from distance – until it led to a famous goal.

Alonso represented Liverpool for five seasons, sharing three of those with Crouch, with the Spanish midfielder highly regarded for his ‘class’ in midfield.

Crouch has reflected back to those times, using that very word to describe Alonso – although he gave a telling insight into one aspect of training that left his teammates frustrated, for a time at least.

“One word comes to my mind when I think about Xabi – class,” Crouch said in a Q&A via the Daily Mail.

“Everything he did was done with a touch of panache, on and off the pitch. He came to Liverpool from Real Sociedad but he had no problem settling into the dressing room, he mixed with everyone.

“In training, he would rap these short balls into your feet and expect you to deal with it. You would then see him strike these beautiful 50-yard passes that would hit their target like a laser.

“To see him in shooting practice was also a sight to behold.

“We had this drill where the midfielders – whether it would be Xabi, Steven Gerrard or Didi Hamann – would arrive on the edge of the box after a ball was crossed in from out wide and the quality of their finishing was just immaculate.

“The sound of the connection illustrated the level of the strike.

“That’s not to say he didn’t drive us mad at times. He used to take on shots from the halfway line at Melwood, with varying success.

“The first time he repeated it in a game – at Luton in the FA Cup – Stevie was going to give him the biggest rollicking of all time… until he saw the ball sail into the net from 70 yards.”