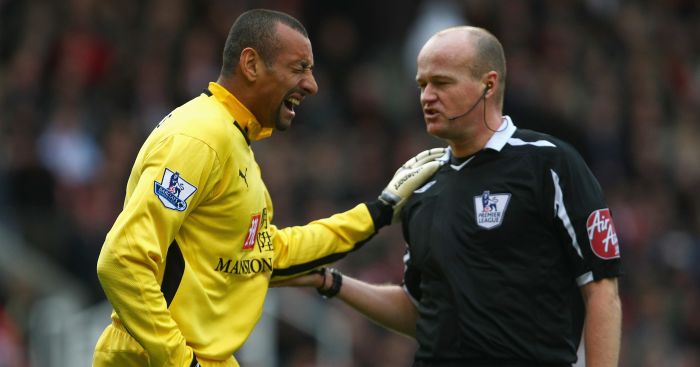 Peter Crouch claims that former Tottenham goalkeeper Heurelho Gomes was reduced to tears in a match against Stoke as he couldn’t handle the “aerial bombardment” from their infamous long throw-ins.

Under Tony Pulis, one of the Potters weapons was Rory Delap’s outrageously long throw-ins that caused havoc in the opposition box.

Everyone knows Delap’s throw meant a difficult time for opposition defences but Crouch reveals that they put goalkeeper Gomes in a “state of turmoil”.

“I watched people panic and give away corners instead of throw-ins due to the sheer panic and confusion that it caused,” he told the That Peter Crouch Podcast.

“I remember Heurelho Gomes believe it or not, we were launching in these missiles, there was myself, loads of people coming, piling into the box and I actually remember Gomes taking the knee and throwing the ball out and a tear in his eye.

“He just couldn’t handle this aerial bombardment that was going on. He was in a state of turmoil.