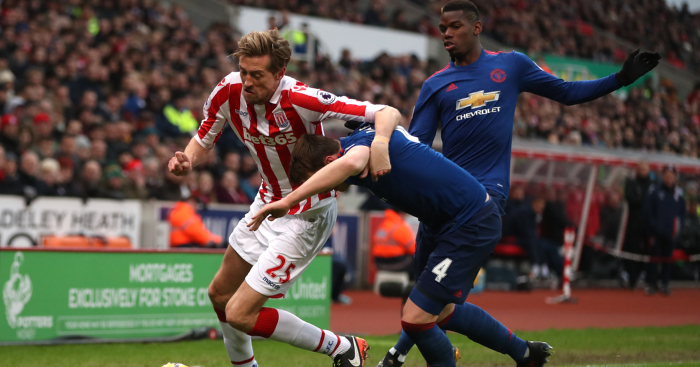 United have the Premier League runners-up spot wrapped up ahead of the final game against Watford on Sunday, with the FA Cup final against Chelsea also around the corner.

But finishing second behind an all-conquering Man City team and ahead of teams like Liverpool and Spurs who are supposedly easier on the eye isn’t enough for some pundits and supporters.

Stoke striker Crouch believes Mourinho and United do not deserve the stick they are receiving.

“Criticising Manchester United has been all too easy this season,” he wrote in his Daily Mail column. “They do not play the same way as Manchester City, Liverpool or Tottenham and that has made them a consistent target.

“To be honest, it is something I have struggled to understand.

“Look at the table — with one game to go, they have second place sewn up. Of course, people will argue that they did not get close enough to City in the title race but, as far as I can see, this has been a very good season for them. I know the style sometimes frustrates the fans but you cannot argue with results.

“It pains me to say this, as my mum’s side of the family support City and I used to play for Liverpool, but how can you knock United when they have secured second place in the table and reached the FA Cup final?

“If United beat Chelsea next Saturday — and I really wouldn’t be tempted to bet against them — that will be three trophies in the space of 16 months. The game is about getting trophies and results and Jose Mourinho has proven he is the man to get them.

“I do not for one minute think that City will have it all their own way next season in terms of the title race. I said a couple of weeks ago that I expect Liverpool to be in the mix but United will be right there, too. They have plenty more to give – and the right man to get the best out of them.”