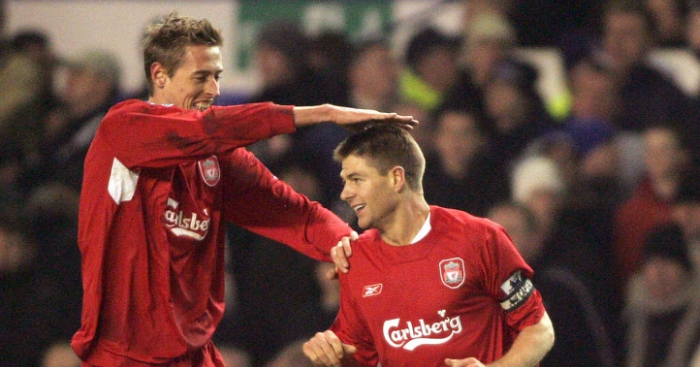 Peter Crouch says that Jamie Carragher ‘hated’ the build-up to Merseyside derbies, and warned his Liverpool teammates not to stoke the fire.

Liverpool face Everton at Anfield on Sunday in the season’s first clash of these two bitter rivalries, with Crouch recounting his derby experiences.

The striker scored in a 3-1 victory in December 2005, and says that Carragher and captain Steven Gerrard’s advice helped him.

‘I’ve been lucky enough to play in derbies on the south coast, Birmingham, north London and Merseyside and the noise and intensity of emotion around the fixtures never leaves you,’ he told the Daily Mail. ‘These matches have the power to define reputations and change how someone is perceived by fans.

‘That was something Jamie Carragher told me before my first Liverpool-Everton game in December 2005. I’d suffered a difficult start to my time at Anfield but I’d just found a little bit of form before we went to Goodison Park.

‘Carra and Steven Gerrard both spoke to me in the build-up and their message was clear: ‘If you do something here,’ they said, ‘you’ll always be remembered. This is the one.’ Those words stayed in my head and, as it turned out, things could not have gone better.

‘I got the first as we won 3-1. Stevie put me through and I went round Nigel Martyn before scoring in front of the Gwladys Street Stand, where Everton’s hardcore support sit. I remember it like yesterday and can still see the angry faces and the programmes flying down at me. Funny.

‘Another thing Carra used to tell me was ‘don’t be the one who says something stupid before’; if we had media commitments in the build-up, he would urge us to be so careful as he didn’t want to wind the Everton players up.

‘I loved the build-up but Carra hated it, he was so nervous and fearful of losing. His message was always the same: don’t give them ammunition. We knew that if we said nothing, someone on their side would crack first. It’s partly why we had a brilliant record.’