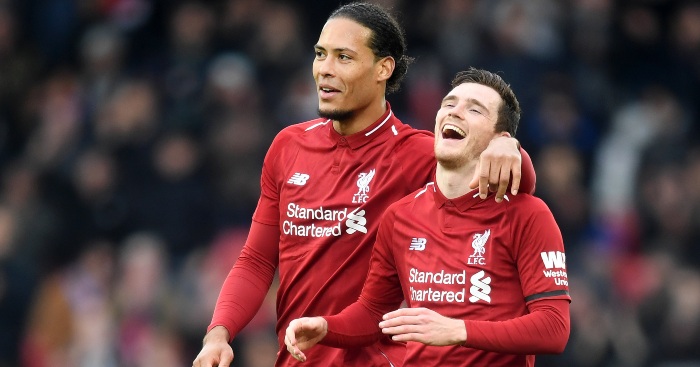 #thismeansbore
Jamie Carragher was talking centre-half partnerships – he knows a fair bit about the subject – on Sky Sports’ Monday Night Football and said:

“I always look at it as a big brother, little brother. At Liverpool, Matip is the little brother. Matip without Van Dijk does not look the same, he feels calm and confident. Pep Guardiola has got two little brothers playing at centre-back.”

‘Incredible’? With Liverpool, it seems everything always means more.

What is it good for?
Now Mediawatch has read and re-read Jurgen Klopp’s press conference quotes from Monday night in Naples and we are utterly baffled by how the Daily Mail managed to arrive at this back page…

What Klopp actually said: “We want to create more stories to remember in the future, not just this one.”

And somebody at the Mail has translated those incredibly anodyne quotes and somehow come up with a ‘war cry’ and a ‘roar’. A ‘roar’! We’re not even sure it’s possible to ‘roar’ the words “we want to create more stories” without sounding like some sort of maniac.

Justified and not ancient
Far from being a maniac, Klopp is a genius who has put together ‘a team many now believe are the best the club has ever known’ (Liverpool.com), if you ignore that easily forgotten 15-year spell when they won ten titles, four European Cups and six domestic cups.

This extraordinary Liverpool side has now won all five of their first five Premier League games of the season so obviously ‘Jürgen Klopp’s refusal to make big Liverpool signings this summer has already been vindicated’. Of course it has. Because five games into the season when none of Liverpool’s front three have suffered an injury is exactly the right time to judge whether they should have bought more attacking players in case their three key ones suffered injuries.

‘Liverpool have built a model which thrives in comparison to their Premier League counterparts, who are repeatedly saturating their summers with mass squad changes, while fighting with the disadvantage of having a transfer window that closes before the rest of Europe.’

Now Mediawatch can forgive a young Liverpool writer for absent-mindedly forgetting the most successful period in the club’s history as it happened over 30 years ago, but surely he remembers the last two seasons in which Liverpool have literally spent over £300m on eight new first-team players? To claim that Liverpool are somehow now above squad improvement by transfer after one blank summer is farcical.

‘Age is also on the side of the European champions, with the squad having a peak, collective average of 26.2. Question marks are however now being asked of the Reds’ closest competitors, Manchester City, when it comes to the rebuild of their team, given that a plethora of Pep Guardiola’s most integral footballers are over the age of 30, unlike Klopp’s men.’

Pesky fact: Of the 15 players who have started Premier League games for Manchester City this season, just three are over the age of 30.

Is that really ‘a large or excessive amount of something’? The only plethora of anything we see here is propaganda.

He’s not that good.

Adrian’s ball
Stan Collymore was at Anfield on Saturday to see Liverpool beat Newcastle and apparently thought ‘What a fantastic, cohesive team my old club are’, which is a tad bizarre because literally nobody in the world thinks like that.

But not quite as bizarre as this paragraph in the Daily Mirror:

‘If you’re looking for weaknesses, maybe you could point to Adrian being out of contract in the summer and Divock Origi being slightly disappointing in his performance and the fact he had to go off.’

a) Adrian is not out of contract in the summer.

b) Even if he were, he is Liverpool’s 32-year-old second-choice keeper; we think they might just be okay.

Must not lose
Elsewhere, Stan is pontificating quite cogently about Manchester City and their defensive problems until he reaches his final two paragraphs, where he writes:

‘I always say on match-day one of a Premier League that you really have to win it and if you don’t, you absolutely do not lose.

‘The same is true in the Champions League…’

How are we Gunner sell this one?
‘Arsenal transfer blow as target Ryan Fraser set to be offered £100k-a-week by Bournemouth to stop him leaving for free’ – The Sun.

Not only are Arsenal leaking goals, but they have suffered the ‘transfer blow’ of missing out on an out-of-form winger they decided not to sign this summer.

It never bloody rains but it pours.

‘Arsenal fans fear Emery could pick a back three of Luiz, Mustafi and Sokratis in a bid to SOLVE shambolic defending.’

I have a cool idea, can we play 3 at the back with Mustafi, Luiz and Sokratis for the riskiest experiment know to the mankind ? pic.twitter.com/H3foMITIcs

And this is exactly the sh*t that happens when you try and get ‘Arsenal’ into every damned headline because they are this week’s designated crisis club.

May cause drowsiness
‘Pierre-Emerick Aubameyang pictured leaving nightclub at 3am after Arsenal’s draw at Watford’ – the Daily Mirror there, bringing us all the big news about a man’s night out on his own time.

Apparently, he looked (or ‘liked’, as per this insightful piece) ‘tired’. It was 3am, of course he looked sodding ‘tired’.

‘PIERRE-EMERICK AUBAMEYANG looked as tired of his evening-out as he did with Arsenal’s defence when he left a London nightclub at 3am.’

Who frigging hyphenates ‘evening out’? The same kind of monster who thinks said ‘evening out’ is news, presumably.