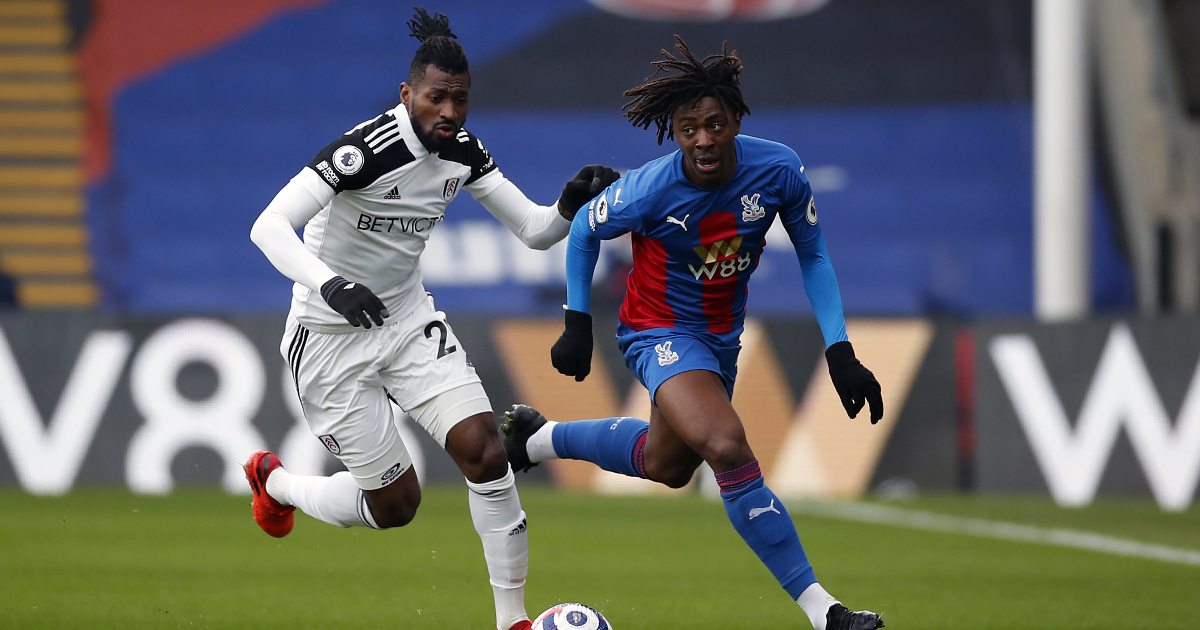 The visitors created the better opportunities at Selhurst Park with the majority falling to centre-back Joachim Andersen, although Josh Maja was brilliantly denied by Vicente Guaita from close range in the second half.

It ensured the spoils were shared in Roy Hodgson’s 150th match in charge of Palace following an encounter which lacked quality.

This point for Fulham moved them within three of relegation rivals Newcastle and Brighton while the Eagles remain in 13th position.

Both teams, fresh from vital wins last time out, lined up in 4-2-3-1 formations and following a frantic start, the game became more cagey.

Hodgson decided to play Christian Benteke from the off and it was the Belgian’s presence which helped create an early half chance for Luka Milivojevic – but his effort was blocked.

Opportunities were few and far between for the majority of the opening half an hour but Fulham goalkeeper Alphonse Areola was forced into action after 27 minutes when he had to save Andersen’s sliced clearance from an Andros Townsend cross.

Whites stand-in captain Andersen was involved again five minutes later. This time at the other end of the pitch and he was left frustrated after heading Ademola Lookman’s corner wide from a promising position.

Scott Parker, up against his former international boss, saw the defender squander another chance soon after from a free kick with set-pieces appearing the best method to break the deadlock in south London.

Fulham made a change during the interval with Antonee Robinson introduced in place of Ola Aina and 42 seconds into the half Maja produced the first shot on target.

The speculative effort from 40 yards was routine for Palace’s goalkeeper, but he was forced into action twice more following efforts by Tosin Adarbioyo and Andersen during the early stages of the second period.

The visitors were showing more ambition and Ruben Loftus-Cheek saw a weak shot easily saved by Guaita against his former loan club.

Maja’s influence was growing for the away side and after he fired wide from the edge of the area, he went even closer in the 68th minute.

Substitute Ivan Cavaleiro’s first involvement was to pick out the January recruit with a cross into the area but Maja’s close-range header was brilliantly tipped wide by Guaita.

Parker’s final roll of the dice involved skipper Aleksandar Mitrovic coming on but Lookman and Maja sent efforts wide to ensure it finished goalless with the hosts failing to have a single shot on target.