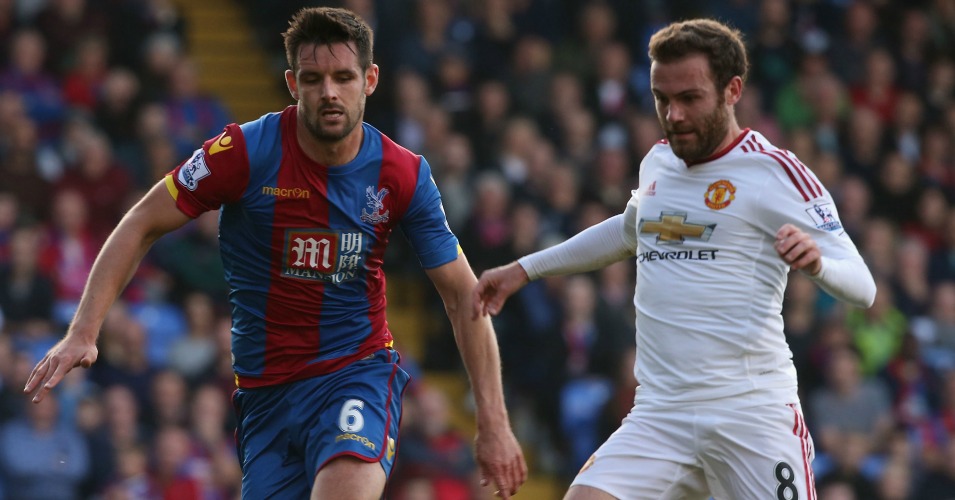 Manchester United lost ground in the race for the Barclays Premier League title with a 0-0 draw at Crystal Palace that could easily have ended in defeat.

Against their improving opponents, United again struggled to convince with a predictable, sluggish display that leaves them at risk of falling outside of the division’s top four.

The starting line-ups of each team suggested that this fixture’s outcome would be decided by whether Palace’s pace, via Jason Puncheon, Dwight Gayle, Yannick Bolasie and Wilfried Zaha, or the intelligence and composure of the visiting Juan Mata, Ander Herrera, Daley Blind and Wayne Rooney would prevail.

In the game’s opening stages, it was unquestionably Palace who provided the greater threat. Gayle forced a reasonable, second-minute save from David de Gea when shooting from close range after Matteo Darmian had clumsily conceded possession, and soon after the goalkeeper reacted even more impressively when tipping Bolasie’s powerful, goal-bound shot from the right on to the bar.

Within a minute those present witnessed another fine save from De Gea, this time when Scott Dann’s header from Yohan Cabaye’s corner was tipped over, though thereafter the expensively assembled visitors began to recover some control.

Palace had lost their previous three fixtures, conceding a total of eight times, and perhaps expectedly their early confidence began to dwindle.

Rooney watched his 25th-minute curling free-kick comfortably palmed away by Palace’s Wayne Hennessey and then hesitated when, with both time and space to score following Anthony Martial’s classy through-ball, struggling to control possession and allowing Hennessey to collect the loose ball.

Palace’s one dimension had been exposed, yet for all of United’s superior quality it became apparent why they had failed to score during their past two games, the second a Capital One Cup defeat by Middlesbrough that also went to extra-time.

Again they played with such caution, as was the case throughout almost all of last season and as has also been for much of this. The £59.7million Angel di Maria has already been one expensive casualty of Louis van Gaal’s reign, and on this evidence there are several who could be the next.

Such unremarkable performances could previously be excused, owing to the players adjusting to their manager’s methods – and Van Gaal working with a largely-inherited squad – but as he has since spent heavily their lack of direction is no longer acceptable.

It almost felt an admission of guilt when, with Palace again improving – albeit without testing De Gea – and United seemingly bereft of ideas, the manager substituted two of his summer signings, Darmian and Bastian Schweinsteiger, for two of those signed before his 2014 appointment, Marouane Fellaini and Ashley Young.

Palace resiliently defended in the game’s closing stages with United targeting Fellaini with repeated long balls, but without the injured Connor Wickham and Marouane Chamakh they lacked their own focal point in attack.

After Dann and Cabaye had again threatened, Bolasie sent another late close-range header over the crossbar when well placed to score, but despite his failure to do so a point and a clean sheet – given Palace’s recent run and the ambitions of their opposition – represented a positive result.