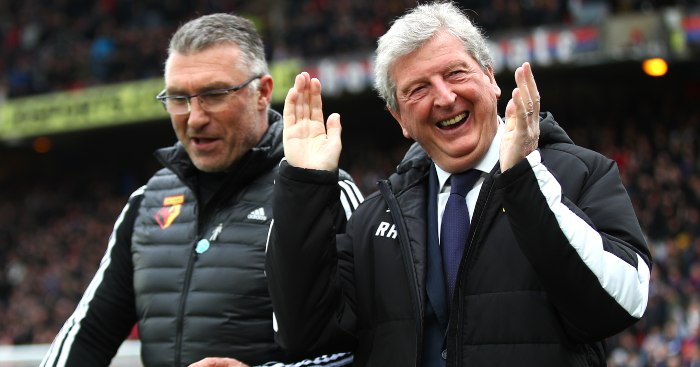 Roy Hodgson insisted he has never felt healthier and is not fearful over the threat of coronavirus after Crystal Palace celebrated his new one-year contract with victory over Watford to virtually guarantee Premier League survival.

Jordan Ayew grabbed the only goal of a scrappy encounter at Selhurst Park to make it three consecutive wins for the Eagles and move them onto 39 points.

After signing a new deal on Friday, it was the perfect way to toast the 72-year-old extending his stay at boyhood club Palace until 2021.

It was put to Hodgson, though, that the current coronavirus outbreak could put a temporary ban on him being in the dugout for matches, with sports governing bodies and broadcasters called to a government meeting on Monday to discuss the impact the virus could have on the sporting calendar.

One contingency reportedly being considered is banning over-70s from attending games, but the Palace boss said: “Whatever decision is made you have to abide by.

“We live in a democracy and we are all law-abiding citizens. I will worry about that when the time comes.

Hodgson added: “I must say it is not something that concerns me much. I presume they are thinking that to protect us because from what I have heard and read, it is the people who are older who are most at risk, but certainly I feel very healthy.

“The things we are doing at the club will keep me a lot healthier than the average guy, especially the average guy who spends a lot of his time on the tube every day.

“I must say I don’t have any fears in that respect but what we are doing at the moment is to make sure we do our level best to respect the guidelines and things that could be done.

“We have cleaners going around the training ground all time, we have disinfected everything, we have hand wash everywhere, the players are no longer shaking hands or hugging so we are doing all the things that are there to be done.

“But the final analysis will be in the hands of the government, who will make the decision on behalf of the country. I wasn’t aware it was the older people spreading the virus, I just thought we were the ones at risk from it.”

Ayew’s 28th-minute strike, after good work from Wilfried Zaha, Christian Benteke and James McArthur, came arguably against the run of play, with Watford starting well a week after they had stunned Liverpool.

Palace goalkeeper Vicente Guaita was not troubled too much, but did need to make saves to deny Abdoulaye Doucoure and Troy Deeney.

The win puts the Eagles 12 points above Watford, who are only outside of the relegation zone on goal difference.

Boss Nigel Pearson said: “The result didn’t go the way we wanted for sure.

“I think we played pretty well and it was a missed opportunity in some ways because of our inability to be decisive in front of goal.

“To reflect back on the game, I thought we played pretty well and had chances in the first half to go ahead.

“We rue those missed chances and the goal we conceded was one we could have done better with.

“Today is a missed opportunity to pick up more points because I think we did enough in terms of performance to go away with at least a point.”