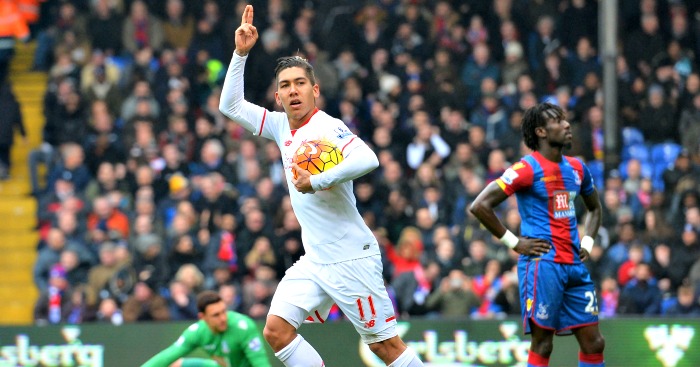 Christian Benteke scored a last-minute penalty as Liverpool came from behind to beat Crystal Palace 2-1.

Palace had taken the lead through Joe Ledley in the first half, with the midfielder firing home from the edge of the area after Liverpool struggled to clear a corner.

Emmanuel Adebayor also hit the crossbar for the hosts, while Simon Mignolet prevented Yannick Bolasie from opening the scoring early on as the Reds struggled to deal with struggling Palace.

But as Liverpool tried to break down their opponents to no avail, keeper Alex McCarthy miskicked his clearance straight to the feet of Roberto Firmino, who equalised on 72 minutes.

Christian Benteke was then introduced in the dying embers of the game, and the Belgian forced two saves from McCarthy before winning a stoppage-time penalty, one which he converted himself to score his first goal of 2016.

It was Firmino’s poor defending and reluctance to block Ledley’s shot that led to Palace taking the lead and, after James Milner was sent off for a second yellow card, close to a first win in the Premier League in 2016.

An aimless attack and little pressure led to McCarthy – surprisingly selected over Julian Speroni in the absence of the injured Wayne Hennessey – making the costly error.

That led to Palace’s winless run in the league, which dates back to December 19, continuing when Benteke was awarded a controversial stoppage-time penalty after going to ground despite minimal contact from Damien Delaney.

The victory, which takes Liverpool up to seventh, maintains their pursuit of a top-four finish and leaves 15th-placed Palace at greater risk of joining the battle against relegation.

Daniel Sturridge and Philippe Coutinho – unquestionably Liverpool’s greatest threats – were among their substitutes as Jurgen Klopp retained much of the team which on Wednesday so impressively defeated Manchester City 3-0.

He said he does not believe his team have been distracted by their progress in the FA Cup – they on Friday visit Reading in the quarter-finals – but their run means that argument is becoming increasingly difficult to maintain.

It perhaps helped they were hosting a team whose priority should be the Europa League, and who even after Wednesday’s win remain so inconsistent at each end of the pitch that it was little surprise further poor defending risked undermining them.

The dangerous combination of Adebayor and Bolasie – a frequent tormentor of Liverpool – threatened early and forced two saves from Simon Mignolet in the first half, first when Adebayor fed Bolasie from close range and then when Bolasie found Adebayor, who from the left of the area curled towards the near post.

Jordan Henderson watched a powerful shot strike Souare in the face, and Divock Origi curled a threatening effort over the crossbar, but each were little more than optimistic, which could not be said about Ledley’s chance early in the second half.

Liverpool were struggling to clear a 48th-minute corner when Firmino sliced the ball to Ledley, who with his left foot shot powerfully into the bottom right corner – while watching Firmino avoid blocking the ball – for his first goal of the season.

That Milner were soon sent off after a second yellow card for a foul on Wilfried Zaha – he had been booked shortly before half-time for another on Yohan Cabaye – then appeared to give Palace the platform to finally secure that elusive league victory.

Instead, a goalkeeping error – and from the less likely of the two candidates, given Mignolet’s erratic nature – allowed Firmino to redeem himself.

Under little pressure, McCarthy slipped when attempting a routine clearance from a pass back to send the ball into the Brazilian’s path, from where he calmly finished into a near open goal.

With their one man advantage, Palace had time to secure a second goal but they simply do not score enough.

Alberto Moreno had already struck the post late on when Benteke theatrically went to ground despite minimal contact after an innocuous challenge from Delaney.

Referee Andre Marriner did not award anything until the intervention of his linesman, and Benteke calmly finished from the spot to secure Liverpool’s win.