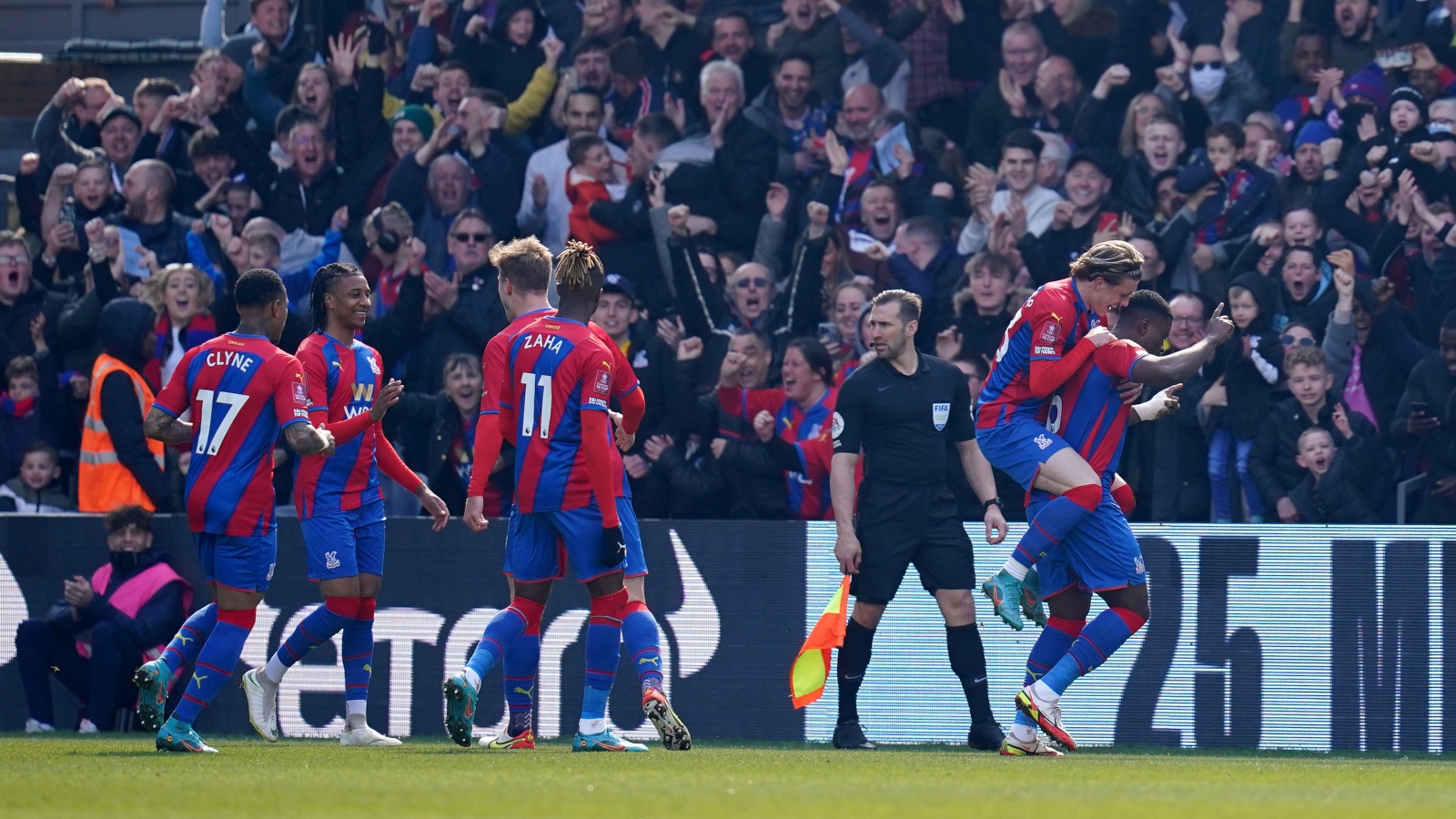 Crystal Palace are in the FA Cup semi-final after a 4-0 win at Selhurst Park piled the misery on Frank Lampard’s Everton.

Marc Guehi shut out Premier League leaders Manchester City on Monday, earned a maiden England call-up three days later and broke the deadlock in the 25th-minute with a deft header to set Patrick Vieira’s side on course for a convincing victory.

READ MORE: Could this be Crystal Palace’s greatest ever season?

Jean-Philippe Mateta doubled the Eagles lead before half-time and the hosts never looked back with Wilfried Zaha and Will Hughes able to wrap up the result with further late efforts.

It continues the momentum built in Vieira’s debut season in the Crystal Palace dugout, with the former Arsenal midfielder unbeaten in his last 19 FA Cup ties and set to lead the south London club out at Wembley for the semi-final next month.

Defeat piled more misery on opposite number Lampard, who turns his attention back to the Toffees’ relegation plight following another day to forget for the Merseyside outfit.

A wave of noise greeted Everton onto the Selhurst Park pitch but they made stronger start out of the two bottom-half teams.

The absence of several players saw Andros Townsend get the nod against his old club and his early free kick created a half-chance for Michael Keane that was scuffed wide.

Richarlison had two penalty appeals waved away soon after before he blazed over and headed another effort off target during a frantic opening 10 minutes where the hosts’ young team looked nervous.

Everton’s momentum was halted in the 12th minute when Townsend suffered what appeared to be a serious injury to his left knee, which saw the ex-Crystal Palace winger hobble off to applause from both sets of supporters.

The break in play helped Vieira’s men settle down and they started to get into their stride with Michael Olise’s corner almost catching out Jordan Pickford, who punched the inswinger over for a second consecutive set-piece.

Another superb delivery was produced by Olise and this time the ball did end up in the net with Guehi able to glance a header into the bottom corner after 25 minutes.

It could have been 2-0 eight minutes later when Mateta found Zaha but the Ivory Coast international rifled into the side-netting under pressure from Ben Godfrey.

Everton remained a threat on the counter-attack and Richarlison’s tame volley straight at Jack Butland in the 40th minute further highlighted this, but the Eagles extended their advantage 60 seconds later.

Ebere Eze – making only his fourth start of the campaign – combined with Zaha down the left before the latter cut back for Mateta, who drilled home and celebrated with his trademark kick of the corner flag.

Mateta might have doubled his tally before half-time but a stunning last-ditch tackle by visiting captain Seamus Coleman kept the deficit at two.

Lampard had seen enough and introduced Dominic Calvert-Lewin for Jonjoe Kenny, who was replaced in the left wing-back role by midfielder Anthony Gordon.

Gordon had to defend against Olise now and he was booked soon into his thankless task. A caution that would have ruled him out of a possible semi-final at Wembley.

Time was running out for the Toffees and substitute Demarai Gray could only hit a snapshot wide on the turn in the 66th minute.

Another weak Richarlison header was easy for Butland minutes later before the hosts finished with a flourish.

The third arrived 11 minutes from time when Zaha set up Olise and although his shot hit the post, Zaha, the Eagles top goalscorer was on hand to tap home from close-range and spark jubilant scenes at Selhurst Park.

Substitute Hughes added further gloss with a tap-in three minutes from time to spark que, sera, sera chants and send Palace back to Wembley for a fourth time during the last decade.