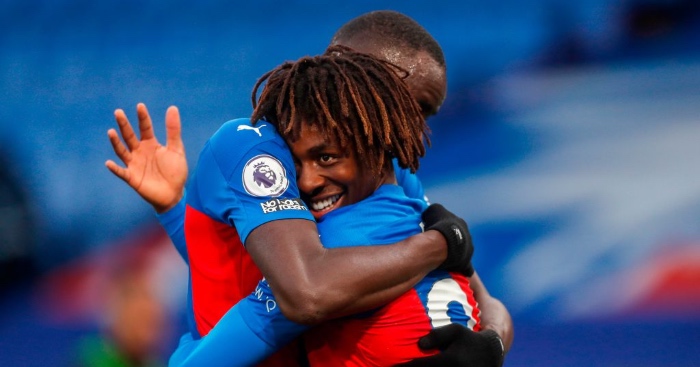 The attacker assisted Scott Dann’s first goal since December 2017 before he got off the mark for his new club with a wonderful free kick.

Helder Costa’s own-goal and Jordan Ayew’s late strike capped a fantastic afternoon for 73-year-old Roy Hodgson, who got the better of Marcelo Bielsa – eight years his junior – in the capital.

Patrick Bamford did pull one back for Leeds and had another controversially ruled out for offside by the Video Assistant Referee as United’s director of football, Victor Orta, let his frustration be heard on several occasions from the stand.

While the focus pre-match was on the battle between the two oldest managers in the league, it was one of the youngest players on the pitch who made the difference early on.

Hodgson handed a start to 22-year-old Eze in one of three changes to the side which lost 2-0 at Wolves last week and the former QPR playmaker quickly vindicated that decision.

After creating an opportunity for Patrick Van Aanholt inside seven minutes, the 22-year-old found stand-in captain Dann from a corner five minutes later for the opener.

It was his first assist since a switch to Palace in the summer and soon after the England Under-21 international got off the mark for his new club.

Eze was fouled on the edge of the area by Robin Koch, but picked himself up and brilliantly curled over the wall and into the top corner with 22 played.

Leeds had already had a goal harshly ruled out for a marginal offside on Bamford, which had left director of football Orta unhappy at Selhurst Park. Bamford was pointing where he wanted Mateusz Klich to play a pass, only for his outstretched arm to come back and cost him on review.

Orta let his anger be known after Eze’s stunning strike too, with visiting midfielder Klich going down with an injury in the build up to Palace being awarded a free kick.

Orta bemoaned the lack of fair play and showed his frustration in the stand, but Bamford did give him and Leeds something to smile about when he controlled Klich’s header and drilled in on the half volley in the 27th minute.

It was the forward’s seventh goal of the campaign and yet the Eagles had the final say on a eventful first half when with 43 gone full-back Van Aanholt got forward on the left and saw his cross deflect off the sliding Helder Costa to squeeze past Illan Meslier at the near post.

Bielsa replaced the Portuguese winger at half-time, with Raphinha introduced and Pascal Struijk should have pulled one back six minutes into the second period, but headed a Jack Harrison corner wide.

Eagles goalkeeper Vicente Guaita was called into action twice in quick succession midway through the half and was equal to both efforts by Ezgjan Alioski and Harrison.

Those stops would prove crucial when Ayew wrapped up the points for the hosts in the 70th minute.

Wilfried Zaha produced a wonderful pass into his strike partner, who had pulled away from his marker and the Ghana international fired home for his first of the season.

It consigned Leeds to a second straight 4-1 defeat, after losing at home to Leicester by the same score on Monday, but Palace have now triumphed in half of their eight league fixtures this term.