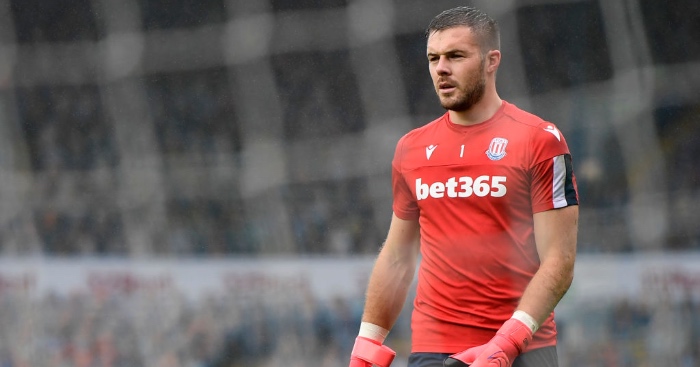 Crystal Palace have signed Jack Butland from Stoke City for an initial fee of £1 million, according to sources.

Roy Hodgson’s side were on the search for a new keeper after Wayne Hennessey picked up an injury whilst on international duty.

They were hoping to sign someone before the domestic window slammed shut earlier today at 17:00.

According to Sky Sports, Butland has signed a deal which will keep him at Selhurt Park for three years.

The deal involves an initial £1 million fee, although this is expected to rise considerably with add-ons.

Butland was aiming for a move away from Stoke after previously notifying the club about his intention to leave.

The 27-year-old has been capped by England nine times so far during his career. He was also closely linked with a move to Liverpool to replace out of form Adrian.

Speaking about the signing, Hodgson said: “I’m very happy that the club has managed to acquire the signature of Jack to join us and compete for a place amongst our goalkeepers at the club. Jack is a player that I worked with for four years at England.

“His last game for me as England manager was a very unfortunate one where he broke his ankle and that cost him his place in the 2016 Euros. But I’ve always believed in Jack’s potential.

“I am aware that his last spell at Stoke hasn’t been the happiest one for him but I sincerely believe that with his qualities, coming to a new club will enable him to resurrect his career and show once again what a good goalkeeper he is.”

The player will compete with current number one Vicente Guaita for a place in the starting 11. However, Butland could emerge as the club’s future first choice keeper if Guaita receives a move back to his home country.

Back in August, he was reportedly ‘delighted’ about Real Betis’ interest in signing him.

It’s doubtful that Butland will be able to play in Palace’s game this weekend against Brighton. However, he should be available for their fixture on Saturday 24th October against Fulham.