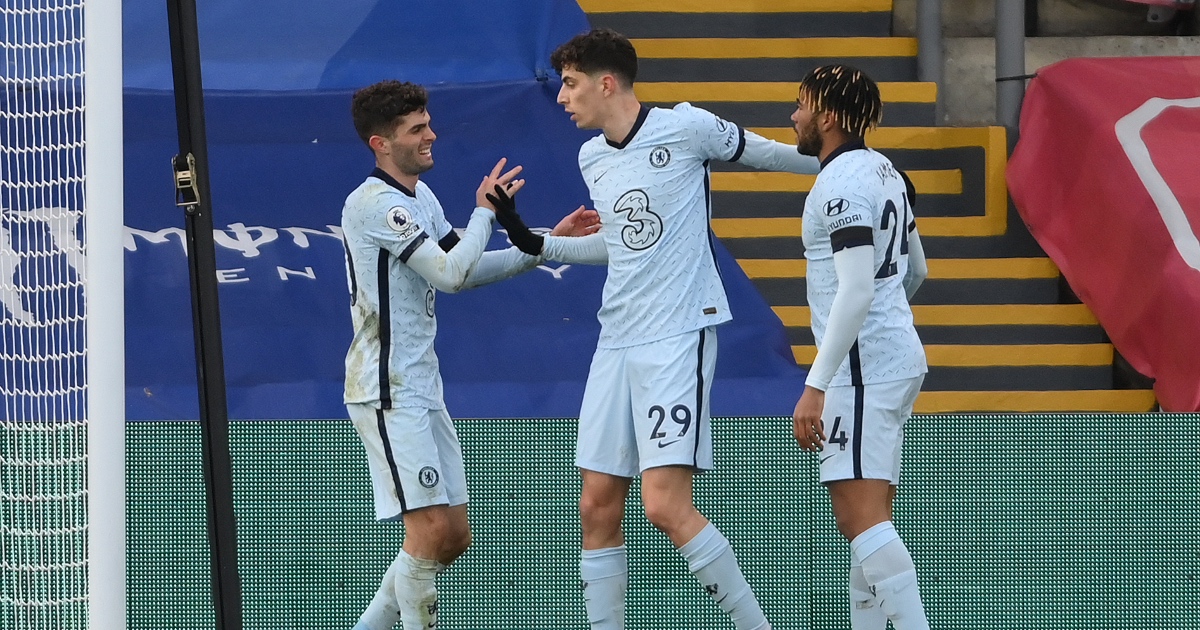 Kai Havertz and Christian Pulisic starred to help Chelsea get their top-four hopes back on track with a comfortable 4-1 win at Crystal Palace.

The Germany international ended his long drought in the Premier League with an early strike, while Pulisic grabbed a brace either side of half time.

Kurt Zouma was also on target for Thomas Tuchel’s men, who moved up to fourth with this routine victory in south London.

Play got under way at Selhurst Park after a two-minute period of silence following the death of the Duke of Edinburgh, Prince Philip on Friday.

Once the action started it was the number two at this Palace who took centre stage, with the booming voice of Roy Hodgson’s assistant Ray Lewington heard prominently during the first five minutes.

It had been a regular feature of football behind closed doors, but an anomaly happened with eight minutes played when Havertz grabbed only his second Premier League goal since a £71million summer switch.

Vicente Guaita made a fine save to deny Christian Pulisic moments earlier before Ebere Eze was dispossessed deep inside his own half and it proved costly.

Havertz won the ball back and was found by Callum Hudson-Odoi in the penalty area where he produced a fine curled left-footed strike from eight yards to open the scoring.

The composure for the finish had been lacking by the German in previous appearances, with this his second goal from his last 28 club outings after an initial bright start to life at Stamford Bridge.

Former Bayer Leverkusen attacker Havertz was not finished there and within 120 seconds, he had assisted Pulisic to make it 2-0 with a cutback as the winger smashed into the roof of the net from close range.

Both had struggled for goals this term, but it was the American’s second in as many starts. Tuchel saw his players again respond to last weekend’s shock loss to West Brom having beaten Porto in midweek.

Havertz almost had a goal of the season contender in the 22nd minute but his volley after a wonderful flick over Patrick Van Aanholt was saved.

It was 3-0 with 30 minutes played, though, when Kurt Zouma headed home a Mason Mount free-kick to ensure Chelsea would finish the night in the top four.

Antonio Rudiger nearly joined his fellow centre-back on the scoresheet prior to half-time, but Van Aanholt cleared his goalbound effort to ensure the damage for the hosts was limited to three at the break.

Ben Chilwell was the next Blues defender to be presented with an opportunity and Tuchel’s high standards were on display when the German threw his hands up in the air following the missed effort by the full-back early into the second period.

With Porto up next on Tuesday, the Chelsea manager was able to withdraw Jorginho after an hour but Palace added some tension to the occasion by pulling a goal back in the 63rd minute.

Jeffrey Schlupp made an immediate impact from the bench and crossed in for Benteke to grab his sixth goal of the campaign with a smart header in what was the Eagles’ first effort of the match.

Normal service was quickly resumed when Gary Cahill made a last-ditch block against his old club to deny Mount, but a fourth goal arrived with 78 minutes played.

Substitute Reece James was afforded too much space on the right by a weary home defence and Pulisic finished off his delivery at the back post to wrap up the scoring.