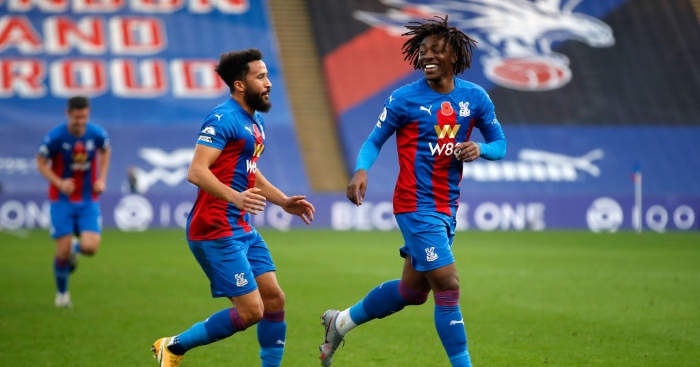 Crystal Palace midfielder Eberechi Eze believes his performance against Leeds ‘is only the start’ after he scored a brilliant free kick.

Palace cruised to a 4-1 victory at Selhurst Park as Scott Dann and Jordan Ayew also got on the scoresheet for the home side.

They benefitted from a Helder Costa own goal to move up in the Premier League table.

Speaking about his performance, Eze said: “I think it is only the start. We are working hard. I am learning a lot and I am growing as a player.

“And I think that is the most important thing, as long as I keep learning, keep pushing and keep working with the guys around me.

“I have loads of people to look at, so it is a great opportunity for me.”

The victory means Roy Hodgson’s side now sit eight in the Premier League table with 13 points.

After taking charge of a free kick in the 22nd-minute, Eze fired the ball into the back of the net, via the crossbar.

The goal was a brilliant sign of things to come for the young talent.

He went on to say: “It is a great moment for me and a proud one for me and my family. I am grateful to God that it has come and hopefully the first of many.

“To be fair, I normally have a headache for tickets because so many people want to come; my mum, my dad, my two brothers, my sister, my girlfriend and all my friends.

“Everyone loves to come to the games. Unfortunately they couldn’t be there, as well as the fans, so that’s a disappointment, but hopefully soon.”

A victory could help them break into the top six, depending on other results.