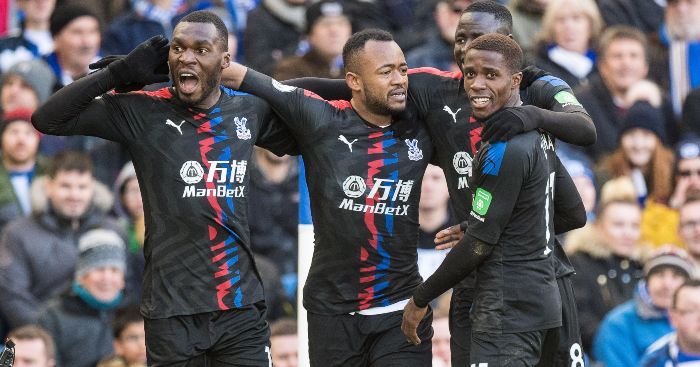 No Premier League club is on a longer current win streak than Crystal Palace. They’re really quite strange.

Best player: Jordan Ayew
There can be no accusations of stat-padding with late goals in comprehensive victories or meaningless consolations in defeat. Jordan Ayew’s eight Premier League goals comprise of five winners and three equalisers. He is more clutch than a handbag dropped on the left-most pedal of a car.

That wonderful tally includes goals at Old Trafford, the Emirates and the Amex, as well as a glorious effort at home to West Ham. For a player who scored once in the Premier League last season, it is remarkable. For a £2.5m signing, it is astonishing. For a striker whose previous best return in England’s top flight was seven goals, it is quite something.

Vicente Guaita has been excellent in preserving the points; Ayew has played the biggest part by far in earning them.

As good as Guaita has been, you might as well give Ayew Player of the Season now.

He is one of only two players under the age of 27 to start a Premier League game for the Croydon care home this season. Jairo Riedewald at least has the excuse of having arrived during a different regime; Meyer was a Hodgson signing soon relegated to the bench at best.

The 24-year-old has performed to a mere fraction of the expectations placed upon him as a Liverpool target and Germany international tempted to south London what feels like a lifetime ago. Even at a time when Palace lack youth, creativity and flair, he has not come close to breaking through.

Best performance: Crystal Palace 1-0 Bournemouth
The opinion was split between insincerely lamenting football’s descent into non-contact sport and pointing out that knee-high tackles should probably not be allowed. But the common consensus was that Crystal Palace stood little chance of emerging victorious when Mamadou Sakho was dismissed in the 19th minute against Bournemouth in December.

That feeling only increased when Patrick van Aanholt succumbed to injury before the half-hour mark. Palace had home advantage but were down a man and a first-choice left-back, with their third change made when James McCarthy replaced Andros Townsend at half-time.

It mattered little. Palace slightly altered their shape, were impeccably disciplined, had more shots than their visitors, showed what Hodgson described as “an outstanding attitude” and, as they do, took one of their few chances.

It was destined to be Jeffrey Schlupp, Van Aanholt’s replacement, that made the tangible difference with the winner. To beat Manchester United away was more of a statement, but this was Palace at their purest, most distilled defensively astute and offensively ruthless form.

Worst performance: Tottenham 4-0 Crystal Palace
Palace are relatively unique as a traditional bottom-half Premier League team that is rarely thrashed/battered/shellacked. Since Hodgson’s first month in charge, which brought 5-0 and 4-0 away defeats to Manchester City and Manchester United in his second and third games, they have lost in the league by three or more goals just twice.

Arsenal ran out 4-1 victors in January 2018, with another visit to north London representing their nadir. A Tottenham side without a win in three games and two months from changing their manager scored four first-half goals en-route to a comfortable win.

It was so uncharacteristic, from Sakho’s early mistake to Van Aanholt’s own goal and the general complacent uncertainty in defence. “It’s one of those games that we will just have to write off and learn from and hold our hands up,” Hodgson said in defeat. Few would have expected just two points to separate them come late March.

Biggest VAR moment: the disallowed opener against Liverpool
One of the toughest games of Liverpool’s remarkable run came at Selhurst Park in November. It took a Roberto Firmino winner five minutes from time to overcome Palace, who themselves had equalised only moments before.

Sadio Mane netted in the 49th minute, only for Wilfried Zaha to respond by the 82nd. Without VAR, the breakthrough would have come in the first half when an unmarked James Tomkins headed a Luka Milivojevic free-kick past Allison.

The replays showed a shove from Ayew on Dejan Lovren that the officials had missed, the goal was disallowed and Palace were back to square one. Hodgson, for what it’s worth, admitted it was the right decision, using it to show why the call to rule out Arsenal’s supposed winner against his side a month earlier was equally just. He might be 72 but his memory is exemplary.

Mané clatters Tomkins when he heads it clear and the ref waves it away, Ayew breathes on a Liverpool player and they cry to the ref and VAR awards the foul.

Did their recruitment work?
Absolutely. Two of their three best players joined last summer for a combined £2.5m. The fact the other – Guaita – joined for free a year prior is testament to Palace’s ability to find value in the market.

There are inevitable misses. Victor Camarasa returned to Spain six months into his loan and the option to sign Cenk Tosun permanently will likely not be exercised. And paying £3m for 12 Premier League starts from James McCarthy resides in the middle ground. But their spine was considerably strengthened at little expense.

Dick move: Sending Alexander Sorloth out on loan so he can score 25 goals in 39 games in Turkey and be linked with Real Madrid when Palace themselves have a combined 26 goals all season
Pretty much.

He’s got the job for as long as he wants it.

What they need this summer
To properly figure out what they want to do. If the long-term objective is to consolidate their position as an established Premier League club, expect more frugality and progression along the same path. But if they want to consider testing the structural integrity of that glass ceiling, more ambition and a different route is surely needed.

There might even be an emphasis on reducing that troublesome wage bill; there has to be an emphasis on freshening up the squad with some actual youth. But in terms of positions, expect a new left-back, central midfielder, striker and, depending on the future of Zaha, potentially a winger on either side.