Home Arsenal Cup of sugar: One kid per PL club ripe for a loan… 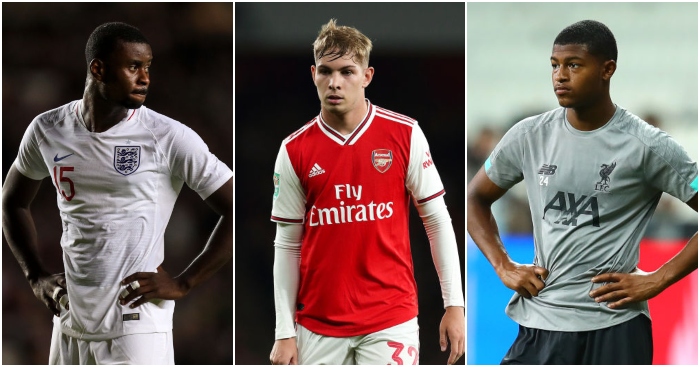 We’re in mid-October and young players up and down the country are starting to wonder whether they are going to kick enough footballs to stave off the growing pains this season. We bring you one from each club – no older than 21 – who needs some football…

ARSENAL: Emile Smith Rowe
While Bukayo Saka, Reiss Nelson and Joe Willock have all established themselves on the fringes of Arsenal’s Premier League squad, the unlucky Emile Smith Rowe – who suffered a concussion on his last Arsenal start in the Carabao Cup – is in danger of being left behind. Last January he went to RB Leipzig on loan but injury and inexperience saw him limited to less than a handful of substitute appearances. It’s probably time to try his luck elsewhere again.

ASTON VILLA: Jacob Ramsey
Ninety minutes for England’s Under-19s in a 4-2 win over Belgium underlined the talent of a player who scored two goals for Villa’s Under-23 side against Manchester United last month. But with Villa now in the Premier League, the attacking midfielder and reigning Academy Player of the Year is unlikely to make it even as far as the bench for a Premier League fixture. A lovely little loan to a League One club might be perfect.

BOURNEMOUTH: Mark Travers
“At the minute, I’m just focused on Bournemouth but if a loan does come up in January, of course everyone wants to play and if that’s my opportunity, I’m sure I will go,” says the full Irish international goalkeeper who does not even make it to the bench in the Premier League. With the Cherries now out of the Carabao Cup, the 20-year-old should be on his way to the Championship.

BRIGHTON: Tudor Baluta
Having apparently turned down a loan in the summer…

Brighton wanted to send Tudor Baluta out on loan, but the player turned down the opportunity. He is ready to fight for a place in the team under Potter. #bhafc pic.twitter.com/PiDKjOqlon

…it seems unlikely that Romanian Under-21 captain and full international Baluta would turn down another loan opportunity in January after failing to play even a minute of Premier League football this season. He has watched Aaron Connolly and Steven Alzate establish themselves in Graham Potter’s top-flight plans but he is no closer himself.

BURNLEY: Ali Koiki
“He gives us great options as a football club and hopefully for when he goes on loan when January comes,” said Under-23 boss Steve Stone last month. “I have told Ali he has to be strong until Christmas so that people can along and watch him and say ‘yeah we want to take him.'” He is 20, can play left-back or on the left wing (from where he has scored a bundle for the Under-23s this season) and spent half of last season on loan at Swindon. But the chances of him getting into this Burnley first team ahead of Erik Pieters and Charlie Taylor under Sean Dyche are hella slim.

CHELSEA: Marc Guehi
We pinpointed Fikayo Tomori in July as a potential loanee, so what do we know? But Guehi seems like a safe bet as he is starting for England’s Under-21s but has made only one Premier League bench; he is currently Chelsea’s fifth-choice centre-half and that is a road that should lead him to the Championship in January. That kind of loan switch did England call-up Tomori absolutely no harm at all.

Been impressed with Chelsea defender Marc Guehi from what I’ve seen of him so far. Very comfortable in possession and a real athlete. Wonder why he hasn’t gone out on loan

CRYSTAL PALACE: Sam Woods
“Sam is a determined young man who is developing well by spending his time with the first team and he has equipped himself well when required. He must keep working hard, but I feel he has a bright future ahead of him,” said Roy Hodgson in August after Woods – a centre-half by trade – started at right-back in the Carabao Cup. At 21 and without a Premier League appearance and five senior centre-halves ahead of him, it is surely time for the first loan spell of his career.

EVERTON: Tom Davies
It’s time. The captain of England’s Under-21s cannot get a game for his club, with Davies playing only 20 minutes of Premier League football this season. He absolutely needs to go and get some football as the signing of Fabian Delph this summer confirmed what he must have already suspected: He is nowhere close to being integral to Marco Silva’s plans. Mind you, he might find his fortunes change when/if Silva departs Everton.

Owls’ anguish over George Hirst could spread far and wide https://t.co/oD6hHkKtIT By @DTguardian

…but the truth is that he is now a Leicester City player who cannot get near the Leicester City first team, the 20-year-old being restricted to Under-23 duty. Just don’t expect him to be given the warmest welcome at Hillsborough if he joins a Championship club on loan and faces Sheffield Wednesday.

LIVERPOOL: Rhian Brewster
“I spoke to him at the beginning of the season and he just said “no”. He doesn’t want me to go on loan, he wants me to stay. So that’s fair enough and it’s good to hear,” said the striker, but we wonder if he feels the same after getting no further than the bench in the Premier League. His 90 minutes in the Carabao Cup only served to confirm what we all suspected; he needs a loan and a few confidence-boosting goals at Championship level.

Harvey Elliott closest of those boys to penetrating into the 1st team, he gets it already. Brewster comfortable with ball into his feet but needs minutes and a loan I think. Curtis Jones lively but again needs higher level regular football. Hoever raw, big potential. 🔴

MANCHESTER CITY: Eric Garcia
No, not Phil Foden, who is doing just fine, thank you. There’s a point where Eric Garcia playing for Spain Under-21s and yet getting off the bench for just 27 minutes of Premier League football presents a problem, and we might well reach that point in January if Manchester City buy a central defender at the same time as Aymeric Laporte returns to fitness, pushing Garcia further down the pecking order. Pep Guardiola describes him as “incredibly intelligent” so he has probably worked out that he will have to move on to get himself some serious football.

MANCHESTER UNITED: James Garner
“Three lads could have possibly gone on loan – Angel Gomes, Tahith Chong and James Garner – but he wanted to keep them here and have a look at them on tour. So a decision will be made, no doubt, for January as well,” said Manchester United academy manager Les Parry this week. We have picked Garner because the 18-year-old has not played a single first-team minute despite United having a basket case of a central midfield. And he is capable of this…

NEWCASTLE UNITED: Luke Charman
“It gives you real hope,” said the 21-year-old striker after watching the Longstaff brothers break through at Newcastle. “As soon as Steve Bruce was appointed I knew that this was the best time – if ever there was one – to get a chance as a local lad. He’s come in and he’s came in on a clean slate. He will judge us from now.” So let’s hope he wasn’t watching as Charman struggled in a 3-0 defeat at Shrewsbury in the EFL Trophy last week. It might be time to get a proper taste of League One football; given the chance, he could be the next Ivan ‘goal machine’ Toney.

NORWICH CITY: Adam Idah
“If I was to go out on loan, it wouldn’t be until January, but the manager might want to keep me around the place,” said the striker who is already a regular Republic of Ireland Under-21 international at the age of 18. He has got as far as the bench in the Premier League but he did himself no favours on his Canaries debut in a 1-0 defeat to Crawley, with Daniel Farke admitting: “Adam is the most disappointed lad in the dressing room because he missed three or four big chances and more or less scored an own goal.” Oops. Some goals (in the right net) at League One level would be nice.

SHEFFIELD UNITED: Reece York
There is no room for youngsters in Sheffield United’s Premier League plans so if central midfielder York wants to play anything other than development football, then he will have to head out on loan in January. Now 19, York left Fulham for the Blades last summer but might have to move on again to get his first taste of first-team football.

SOUTHAMPTON: Callum Slattery
In February he started and played the full 90 minutes of a Premier League game but now he is very much ensconced in Southampton’s Under-23 set-up, captaining that side. Some Saints fans would like to see him in the Premier League after three straight defeats, but there’s probably a decent career waiting for central midfielder Slattery in the Championship.

TOTTENHAM HOTSPUR: Oliver Skipp
Mauricio Pochettino likes to keep his favourite young players close, but playing just two minutes of Premier League football is not the way to keep a 19-year-old midfielder with England Under-21 aspirations happy. Right now he will be looking across north London at Joe Willock and wondering why he is not getting the same level of opportunities. Pochettino will preach patience – and cite Harry Winks as an example – but being ousted from the Carabao Cup was a particularly hefty blow.

My fear is that Oliver Skipp will go the way of KWP – squad player who gets about 10 games a season. Skipp is a very good player in his age group and should be on loan in the lower league playing 30-35 games a season.

WATFORD: Tom Dele-Bashiru
After joining from Manchester City in the summer in search of first-team football, the 20-year-old has found himself restricted to just 18 minutes of Carabao Cup duty, which must be particularly galling when Watford really have been rotten. Surely he must head somewhere in January – presumably Italy – because he is getting nowhere near a Watford side for whom Domingos Quina (19) at least gets on the bench.

WEST HAM: Nathan Holland
It’s astonishing that Holland has actually reached the age of 21 without a) playing in the Premier League or b) going out on loan from West Ham. It is surely now time for the latter for the winger, especially as he made almost no impression in a 4-0 Carabao Cup defeat to Oxford United. Shrewsbury are among the clubs linked; he is no Grady Diangana.

WOLVES: Dion Sanderson
“He’s a great kid who works hard, all the challenges we’ve put to him, even as a young boy, he’s always risen to,” said Wolves Academy boss Scott Sellars this summer as Sanderson – nephew of javelin legend Tessa Sanderson – signed a new contract. But he is 19 and cannot get past the bench for Carabao Cup duty, so six months in League One might be just the ticket.