Home F365 Features Cup of sugar: One kid per PL team who needs a loan 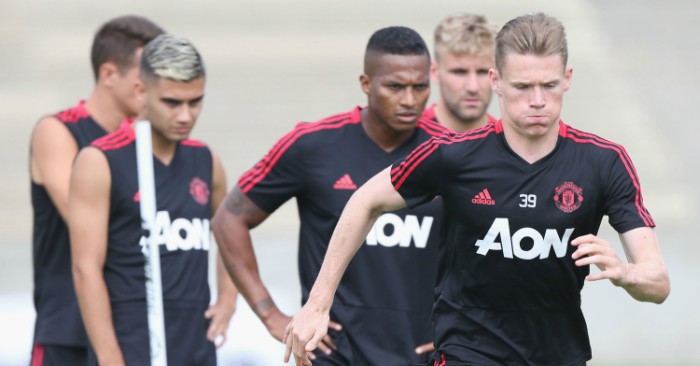 The Arsenal pair of Joe Willock and Eddie Nketiah very impressive for England Under-20 last night. Pace, skill, strength, awareness. Be interesting to see if they get first team club opportunities via loans.

BOURNEMOUTH: Jack Simpson
The centre-half described reports of a summer loan move to Rangers as “strange” but what now seems strange is that Eddie Howe apparently blocked that move. Surely he will not block a similar move in January after Simpson has failed to even make a bench in the Premier League. Especially if the Cherries are knocked out of the Carabao Cup, which is currently the only thing keeping Simpson warm at night.

BRIGHTON: Viktor Gyokeres
The Swedish striker has scored 12 goals in ten games for Brighton’s Under-23s since joining from IF Brommapojkarna in January. Surely that should earn him more than Checkatrade football, but there is little chance of a real first-team breakthrough with Chris Hughton’s currently bloated squad.

BURNLEY: Dan Agyei
“He looks a threat, he can be a threat,” said Burnley Under-23s boss Jon Pepper earlier this month as the 21-year-old striker scored his fifth and sixth goals of the season. Agyei has previously had League One loan spells at Coventry, Walsall and Blackpool, and surely another beckons in January. More of this please…

Pick that out! @dan_agyei scores a spectacular goal for @WFCOfficial ➡️ @EFL highlights from 11.30pm on @channel5_tv. pic.twitter.com/pgNE3MRYDx

CARDIFF CITY: Cameron Coxe
The dearth of depth in Welsh football means that Cameron Coxe was named in a senior Welsh squad in May despite only ever playing 90 minutes for Cardiff City in the Carabao Cup last season. Now the 19-year-old right-back needs a loan as there is absolutely sod all chance of him playing in the Premier League. Not least because Neil Warnock has not picked a single player under the age of 23.

CHELSEA: Ruben Loftus-Cheek
A kid at 22? When you have played just 33 minutes of Premier League football this season and lost your place in the England squad, you must feel like a kid again. He surely has to exit in January, and there will be no shortage of clubs interested. Everton and West Ham are two Premier League clubs mentioned. Just a few months after the World Cup, Chelsea apparently blocked a call-up to the Under-21s  last week. That is some fall back down to earth.

CRYSTAL PALACE: Luke Dreher
He made two Premier League benches under Alan Pardew, and was praised as a “talented young player” by Frank de Boer, but a promising career has stalled somewhat under Roy Hodgson. Former U18 Player of the Year Dreher saw hip and calf injuries decimate his 2016/17 season, while knee surgery further harmed his development. Now back in full training, he needs a fresh start.

EVERTON: Kieran Dowell
A starter and scorer for England’s Under-21s this week but really, he was lucky to get that nod after nary a minute for Everton in the Premier League since returning from a successful season-long loan at Nottingham Forest. Everton boss Marco Silva describes him as “a player who needs to play more” so surely another loan beckons.

Kieran Dowell isnt ready for Premier League football. He drifts in and out of games too much and he hasnt got the consistency required to be a top level footballer YET! Another Loan move to a good championship club with a good coach is required #efc #nsno #Everton

Luca de la Torre scored for Fulham U23s today in their 2-1 over Birmingham City in the PL Cup. He seems to be outgrowing the U23 level and really should be getting minutes in a first team environment. Loan move in January perhaps? pic.twitter.com/KKPfGR1FHv

The greatest own goal you will see this year, courtesy of Huddersfield Town's Juninho Bacuna. pic.twitter.com/poVzHOG4cB

The 21-year-old has not been seen since, though he was Town’s 19th man for their trip to Burnley earlier this month. Whoop whoop. Go and get some football, fella.

LEICESTER CITY: Hamza Choudhury
After winning the Toulon tournament this summer with the England Under-21s, Choudhury might have expected to make the breakthrough at Leicester this season. But the great-haired one reckoned without Nampalys Mendy being found in the cupboard. Being captain of Leicester’s Under-23s is all very nice until you see what Wilfred Ndidi, Ben Chilwell and James Maddison are all doing at the same age.

Watching the Scotland v England u21s. Dominic solanke is playing n Stevie G is in the crowd. Guess who all they lazy bastard journalists will be linking us with when they’re writing their big exclusives tomorrow 🤦🏻‍♂️🤦🏻‍♂️ most likely a January loan deal

MANCHESTER CITY: Brahim Diaz
Opted to stay at Manchester City this season to fight for his place, but would he make the same decision in January after playing just 55 minutes in the Carabao Cup and another half-season trying to impress in the shadow of Pep’s lad Phil Foden? Diaz is likely to leave on a permanent deal next summer; the Spanish Jadon Sancho?

MANCHESTER UNITED: Scott McTominay
Just months after Jose Mourinho invented an award just so he could reward the young Scot for standing by his side through the storms, The Sun were linking Scott McTominay with a January loan switch – usual Championship suspects Aston Villa and Leeds were mentioned. Let’s face it, he’s not really very good. But he’s a trier.

Why does Scott McTominay receive so much hate from our fans? I genuinely don’t get it. He’s worked his way up through the academy, been backed by the manager and given the chance to represent Manchester United, the club he’s been at since he was a kid. Give the lad a break. #mufc

NEWCASTLE UNITED:  Freddie Woodman
“January is around the corner and I have to be prepared for it when it comes,” says Newcastle United’s fourth-choice goalkeeper Woodman, who was denied a fifth loan spell this summer because of a contract dispute with the club. A lack of football has cost him his England Under-21 place after winning the Toulon tournament this summer; no wonder he calls it a “bad situation”. He must look at Dean Henderson at Sheffield United and want to weep.

SOUTHAMPTON: Harry Lewis
Mark Hughes has no time for kids so he has already sent players like Harrison Reed and Josh Sims out on loan, while the likes of Matt Targett and Sam Gallagher are no longer really kids. Harry Lewis is Southampton’s third-choice goalkeeper, which is not a lot of fun when you are losing 4-0 to Cambridge United in the Checkatrade Trophy. Last season he was on loan at Dundee United; that was probably a lot more fun.

TOTTENHAM HOTSPUR: Kyle Walker-Peters
“He (Mauricio Pochettino) spoke to me at the beginning of the season which is good,” said right-back Walker-Peters this week. What is not good is that Walker-Peters has since played not a minute for Tottenham, even in the Carabao Cup. Right now, he’s relying on England Under-21 call-ups to actually play some football.

I would never criticise Mauricio Pochettino, he's amazing and Spurs are lucky to have him. However his treatment of Kyle Walker-Peters has been very perplexing. Why keep him but not let him play at all? U23s? Nope. Carabao cup? Nope. Just play him or loan him. Such a waste.

WATFORD: Ben Wilmot
It was quite the coup when Watford signed the very highly rated Wilmot for £1m for Stevenage, but the teenager has so far been restricted to Carabao Cup action, not even making the bench for the Hornets’ Premier League campaign. Javi Gracia has been impressed with his versatility – playing the centre-half in central midfield – and that could stand him in good stead for some Championship action in January.

WEST HAM: Reece Oxford
Three loans in and he is somehow still only 19. He is clearly a trillion miles from being considered by Manuel Pellegrini and is now merely held up as an example of a player who lost his way after being given a big contract. He is reportedly the reason the Hammers are holding back with Declan Rice. Oxford is currently captain of West Ham’s Under-23 side but he could surely find more fulfilling work away from east London.

WOLVES: Morgan Gibbs-White
One of England’s Under-17 world champions, Gibbs-White could be the real deal but he is not getting minutes in the Premier League. Or rather, he is getting a total of 31 minutes in the Premier League this season and that really is not enough. At 19, he is ready for a full half-season of football. We’re going to suggest Aston Villa or Leeds of course.

Gibbs-White will be out on loan in January I think, so much potential but he can't grow in this side as a bit-part sub. Lacks a bit of composure when finishing and doesn't have the experience to affect games. Not having a go, just an observation #wwfc