Home Arsenal Cup of sugar? One player from every club ripe for a loan 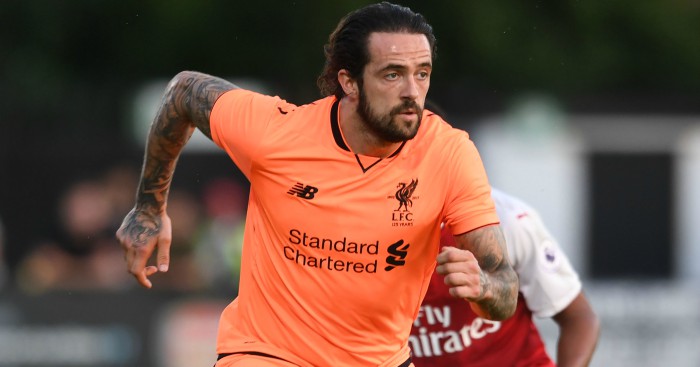 We did this in July and we handily provide an update on those players here too. Because we’re nice like that…

Arsenal: Theo Walcott
He has played 47 minutes in the Premier League this season. Forty-seven minutes. That’s even less than Jack Wilshere. He needs football and there are plenty of Premier League teams – West Ham, Everton and Southampton to name three – who would love his ‘running really fast’ schtick.
In July we said: Jeff Reine-Adelaide. He stayed at Arsenal and has made one Europa League bench as Ainsley Maitland-Niles, Reiss Nelson and Joe Willock have all had substantial minutes.

Bournemouth: Lys Mousset
The return of Callum Wilson means that the young Frenchman has not even been on the bench for Bournemouth’s last two Premier League games. The Championship surely beckons. He still awaits his first goal in English football after 23 appearances.
In July we said: Lys Mousset. We always say Lys Mousset.

Brighton: Jamie Murphy
The definition of ‘ripe for a loan’, Murphy is a 28-year-old winger who was last seen in Brighton colours in the Checkatrade Trophy. He has not been seen on a Premier League bench since September. Has been linked with former club Sheffield United as well as Leeds.
In July we said: Connor Goldson. He stayed at Brighton and has featured on nine Premier League benches without playing a single minute; Lewis Dunk and Shane Duffy are rather good. He was Mr EFL Cup though.

Burnley: Nahki Wells
A bizarre £5m signing for Burnley from Huddersfield, Wells has only made the bench three times and finds himself behind Chris Wood, Sam Vokes and Ashley Barnes in the striking pecking order. Leeds in January to complete the West Yorkshire set?
In July we said: Tendayi Darikwa. He actually made the permanent move to Nottingham Forest.

Chelsea: Baba Rahman
Everton are said to be interested in the (ahem) £18m Ghanaian, but Schalke are seeking a return after last season’s loan. “Is Baba ready to help us in the second half of the season? You have to see,” sporting director Christian Heidel this week.
In July we said: Charly Musonda. He stayed and has played a grand total of 26 minutes of Premier League football, though a goal and an assist in the Carabao Cup suggest he could yet have a Chelsea future.

Crystal Palace: Freddie Ladopo
Last seen playing 33 minutes of a Carabao Cup defeat to Bristol City, the 24-year-old Ladopo has not made a Premier League bench since September. Roy Hodgson has made it clear that he does not see him as an option.
In July we said: Jonny Williams. He’s on loan at Sunderland, the poor bugger.

Everton: Mo Besic
The forgotten man of Everton, Besic is behind Idrissa Gueye, Morgan Schneiderlin, Tom Davies and Wayne Rooney in the race for central midfield minutes. It’s unlikely that Sam Allardyce will give him any more chances than Ronald Koeman or David Unsworth.
In July we said: Dominic Calvert-Lewin. We were very wrong. He has made ten Premier League starts and has more PL assists (4) than anybody else in the squad.

Huddersfield Town: Joe Lolley
Nobody is shocked that Lolley has not played a single minute in the Premier League this season, though he did score against Rotherham in the Carabao Cup. A recent hat-trick for the Under-23s should see League One managers form an orderly queue.
In July we said: Joe Lolley. We told you so.

Leicester City: Ahmed Musa
You could also make a case for Islam Slimani but at least he is getting as far as the Leicester bench. Musa is the £16m signing very much consigned to Under-23 football, currently mourning the sacking of his old boss Leonid Slutsky by Hull.
In July we said: Harvey Barnes. And he is playing regularly on loan at Barnsley.

Liverpool: Danny Ings
“I cannot make the squad bigger,” says Jurgen Klopp, so Danny Ings is never in the squad. Newcastle, West Ham and a host of other teams should be interested in January.
In July we said: Sheyi Ojo. And he is playing regularly on loan at Fulham.

Manchester City: Oleksandr Zinchenko
One game at left-back in the Carabao Cup is not enough for a full Ukrainian international winger. But unfortunately Pep Guardiola has other ideas: “He will remain with us for the whole season, because I have a feeling that we are going to use him.” Boo.
In July we said: Patrick Roberts. And he did indeed go back to Celtic.

Manchester United: Luke Shaw
Just when you thought he will surely go in January, Shaw played 90 minutes against CSKA Moscow. But unless Jose Mourinho has a radical change of heart, Shaw’s only real chance of reaching the World Cup is a loan move to Newcastle or similar. Let him go, Jose.
In July we said: Andreas Pereira. And he is doing really rather well on loan at Valencia.

Newcastle United: Jack Colback
Rafa Benitez has made it very clear indeed that Colback has no future at Newcastle under his management. The Championship beckons. Three years ago he made an England squad.
In July we said: Adam Armstrong. And he has scored one Championship goal on loan at Bolton.

Southampton: Matt Targett
Ryan Bertrand is not for shifting from his left-back spot and at 22, it’s time that Targett got some first-team football. He almost joined Newcastle in August but Mike Ashley reportedly balked at the loan fee. Something has to happen in January; he hasn’t played a minute under Mauricio Pellegrino.
In July we said: Jake Hesketh. He stayed at Southampton and has got no further than Checkatrade duty.

Stoke City: Charlie Adam
We confess that the complete sidelining of Holyrood ball player Adam had passed us by. Remarkably, he has played only seven minutes of Premier League football this season. A switch to Derby, Ipswich or somewhere equally dull is on the cards in January.
In July we said: Ryan Sweeney. And he joined League One Bristol Rovers on loan.

Swansea City: Luciano Narsingh
It’s incredibly easy to forget that the Dutchman is a Swansea player, and it’s something he would probably prefer to forget too. Left out of Swansea’s last three squads after allegedly requesting a loan exit from his Swans hell. Fenerbache next?
In July we said: Jefferson Montero. And he joined Getafe, where he is not really playing either.

Tottenham: Georges-Kevin N’Koudou
“He started to realise that he needed to improve in many things,” said Mauricio Pochettino this week. A start and goal in the Champions League have followed but one minute of Premier League football should prompt January exit.
In July we said: Moussa Sissoko. How wrong we were. He has played more Premier League minutes than Mousa Dembele. Which is weird.

Watford: Jerome Sinclair
It’s really not going well for the former Liverpool youngster, who has appeared just once on Watford’s bench this season. He did get as far as Sheffield on Deadline Day only for his loan move to fall through because of alleged demands from his agent. January needs to go better.
In July we said: Ben Watson. He stayed at Watford and has played 11 minutes of Premier League football.

West Brom: Oliver Burke
Injury (and Tony Pulis) has restricted him to just a handful of minutes in the Premier League since a summer move from Leipzig. What the lad needs is a proper Championship run-out; the queue will be long, and presumably headed by Nottingham Forest.
In July we said: Tyler Roberts. And he is playing and scoring goals for Walsall in League One.

West Ham: Toni Martinez
Has made it as far as the bench under David Moyes after being prolific for the Under-23s but surely will not have a sniff once Victor Anichebe arrives. The sensible move would be a switch to the Championship to get acclimatised.
In July we said: Reece Burke. And he went on loan to League One Bolton.