Home Manchester United Cup of sugar? One player from every club that needs a loan 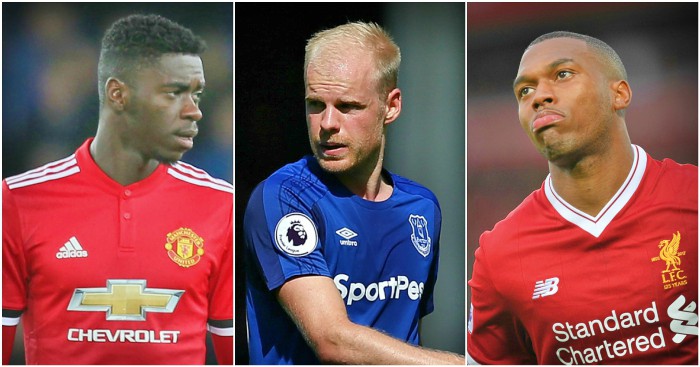 We did this in early December so we will provide an update on those we suggested six weeks ago. Which is a bloody long time in football…

Arsenal: Chuba Akpom
‘Arsenal’s Chuba Akpom admits drink driving after crashing £60,000 Range Rover while ‘drunk on vodka cranberry’ … but striker’s dad feared he’d been KIDNAPPED after finding wreckage’ is the last headline we saw about Chuba Akpom, who played three minutes in a 4-2 FA Cup defeat to Nottingham Forest a few days later. And that’s just about as good as things have got for the now-22-year-old striker whose Arsenal chance has surely gone.
In December we said: Theo Walcott. And he has gone permanently to Everton.

Bournemouth: Lys Mousset
Finally scored his first goal in English football against Wigan in the FA Cup (whoop whoop) but he has still only played 181 minutes of Premier League football this season. Give him a little spell in the Championship, Eddie.
In December we said: Lys Mousset. We always say Lys Mousset.

Brighton: Kazenga LuaLua
Back from an underwhelming loan spell at QPR (eight appearances, no goals) is the Congolese winger who has not actually played for Brighton’s first team since August 2016. Sunderland are said to be interested.
In December we said: Jamie Murphy. He has since gone on loan to Rangers with a view to a permanent move in the summer.

Burnley: Aiden O’Neill
The 19-year-old Australian spent the first half of the season on loan at Fleetwood Town before buggering off to China to play in the AFC U23 Championship. A loan move to Scunthorpe has since fallen through so he needs another League One club to step forward.
In December we said: Nahki Wells. But he has since played 22 minutes of Premier League football. So how stupid do we feel now?

Chelsea: Baba Rahman
“Getting Baba depends a bit on Chelsea, maybe they want to make something else in the transfer market,” Schalke chief Christian Heidel told Reviersport this week. “We do not have the pressure like he has to play tomorrow, so we are waiting quietly.” A reminder: He cost £18m.
In December we said: Baba Rahman. Come on Chelsea, let him go.

Crystal Palace: Chung-Yong Lee
So very far down the pecking order at Palace now and one of about a trillion players who is out of contract in the summer. He could definitely ‘do a job’ in the Championship.
In December we said: Freddie Ladapo. He is still waiting.

Everton: Davy Klaasen
“As a person and lad he’s a terrific young man, but at the moment, there’s not a place in the side for him,” said Sam Allardyce of a Dutch international footballer who cost Everton £23.6m but has not featured in the Premier League since September. Everton fans might argue that he could hardly do worse than the current shower of shite.
In December we said: Mo Besic. He has not even been on a bench since November. Show some mercy, Sam.

Huddersfield Town: Michael Hefele
An absolute hero to Town fans but the loan signing of Terence Kongolo has moved him down the pecking order. FA Cup exit to Birmingham this weekend should be the catalyst needed to shunt the German to Sheffield Wednesday or similar.
In December we said: Joe Lolley. But then he went and scored a goal and everything.

Leicester City: Ahmed Musa
The smart money is on a move back to CSKA Moscow for a £16m player who has not started a game in the Premier League since January 2017. Poor Ahmed.
In December we said: Ahmed Musa. Poor Ahmed.

Liverpool: Daniel Sturridge
Whether it be Inter Milan or Sevilla, the smart thing for both player and club is to give Sturridge a loan spell to a) prove he has two working legs and b) give himself an outside chance of going to the World Cup. He is 28 and he needs football.
In December we said: Danny Ings. And then he appeared against Swansea and gave us all something of a fright.

Manchester City: Tosin Adarabioyo
Once the MailOnline have been disgusted with you being able to buy an expensive house despite never playing Premier League football, you have arrived. At 20, it is now time for Adarabioyo to play some serious football.
In December we said: Oleksandr Zinchenko. Pep Guardiola had said he had “a feeling that we are going to use him”. Lesson: Never doubt Pep Guardiola.

Manchester United: Axel Tuanzebe
We are astonished he has yet to go out on loan from Manchester United but the time is surely now – after playing just a few seconds against Everton on New Year’s Day in which he failed to even touch the ball. You will not be surprised to learn that Aston Villa manager Steve Bruce is interested.
In December we said: Luke Shaw. He has since started five Premier League games so will presumably stay put until the summer.

Newcastle United: Jack Colback
Rafa Benitez has made it very clear indeed that Colback has no future at Newcastle under his management. The Championship beckons. Three years ago he made an England squad.
In December we said: Jack Colback. Getting somebody to pay his reported £70,000-a-week wages is clearly more difficult than anticipated.

Southampton: Josh Sims
Remember back in November 2016 when the 19-year-old Josh Sims made Ronald Koeman look like a fool for dismissing the Saints’ youth system with his performance against Everton? Well now the same Josh Sims is 20 and he has played one minute (one touch) of Premier League football this season after returning from injury. He needs football. Leeds? Millwall? Anyone?
In December we said: Matt Targett. He has since joined Fulham, who look a whole heap of fun.

Stoke City: Ibrahim Afellay
A Champions League winner should not be out of the match-day squad while Stephen Ireland sits on the bench. Astonishingly, Afellay has played 55 games for Stoke in a forgettable spell that is surely nearing its end.
In December we said: Charlie ‘Lazarus’ Adam, now very much back in the Stoke side.

Swansea City: Jay Fulton
Swansea have an awful lot of average central midfielders but possibly the most average is Scotsman Jay Fulton, who has played 17 minutes of Premier League football this season. Barnsley beckons. Barnsley always beckons.
In December we said: Luciano Narsingh. And then he played in seven of Swansea’s next nine Premier League games. Go figure.

Tottenham: Kyle Walker-Peters
On the opening day of the season, Walker-Peters played 90 excellent minutes against Newcastle; he has since played eight minutes of Premier League football, though an outing at left-back in the FA Cup suggests that Mauricio Pochettino has plans for KWP.
In December we said: Georges-Kevin N’Koudou. And he went to Burnley on loan and has since made two substitute appearances in two 1-0 defeats.

Watford: Jerome Sinclair
He has played only 307 minutes of football since he left Liverpool for Watford in search of first-team football almost two years ago. ADO Den Haag were reportedly interested in a January loan and we are very much behind such an entirely illogical move.
In December we said: Jerome Sinclair. We are sticking with this one.

West Brom: Oliver Burke
He has played only 19 minutes of Premier League football since Boxing Day, despite being fully fit. Is there room for an unpredictable young winger in a relegation battle? Possibly not. There should be room for one in a Championship promotion chase though.
In December we said: Oliver Burke. We are sticking with this one too.

West Ham: Toni Martinez
Finally made a West Ham start against Shrewsbury in the FA Cup (and was credited with the assist for the winner) but indications from West Ham are that as soon as the Hammers bring in another striker, Martinez will be off to the Championship on loan.
In December we said: Toni Martinez. And this one.