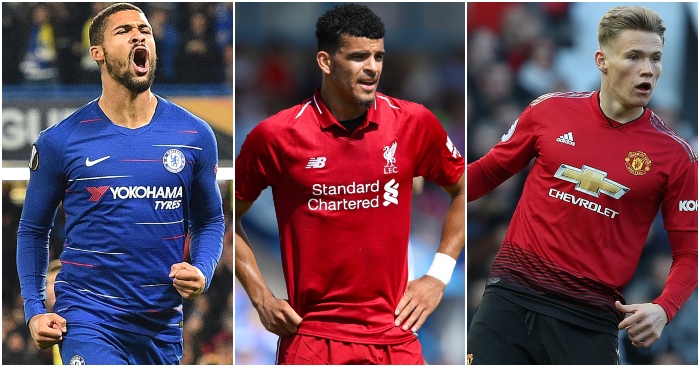 The Arsenal pair of Joe Willock and Eddie Nketiah very impressive for England Under-20 last night. Pace, skill, strength, awareness. Be interesting to see if they get first team club opportunities via loans.

In the summer we said: Matt Macey
The goalkeeper went to Plymouth for the season where he was ever-present for the drop-zone dwellers until the final game of 2018.

BOURNEMOUTH: Jack Simpson
The centre-half described reports of a summer loan move to Rangers as “strange” but what now seems strange is that Eddie Howe apparently blocked that move. The closest Simpson has got to Premier League action is two bench appearances, though the defender has played four times in the EFL Cup. Injuries at the heart of Bournemouth’s defence may scupper his hopes of getting away this month too, but Simpson at least gained an England Under-21 cap in November, despite his inactivity for much of the season.

In the summer we said: Connor Mahoney
The winger moved to Birmingham for the season and so far he has one goal and one assist in 18 Championship appearances.

BRIGHTON: Viktor Gyokeres
The Swedish striker has scored 12 goals in 20 games for Brighton’s Under-23s since joining from IF Brommapojkarna a year ago. That should earn him more than Checkatrade football, but there is little chance of a real first-team breakthrough with Chris Hughton’s currently bloated squad.

In the summer we said: Jiri Skalak
The Czech Republic winger joined Millwall permanently in August.

BURNLEY: Dan Agyei
“He looks a threat, he can be a threat,” said Burnley Under-23s boss Jon Pepper in October as the 21-year-old striker scored his fifth and sixth goals of the season. Agyei has previously had League One loan spells at Coventry, Walsall and Blackpool, and surely another beckons in January. More of this please…

Pick that out! @dan_agyei scores a spectacular goal for @WFCOfficial ➡️ @EFL highlights from 11.30pm on @channel5_tv. pic.twitter.com/pgNE3MRYDx

In summer we said: Aiden O’Neill
The Brisbane-born midfielder returned to Australia in August to play for Central Coast Mariners for the season.

CARDIFF CITY: Cameron Coxe
The dearth of depth in Welsh football means that Cameron Coxe was named in a senior Welsh squad in May despite only ever playing 90 minutes for Cardiff City in the Carabao Cup last season. Now the 20-year-old right-back needs a loan as there is absolutely sod all chance of him playing in the Premier League. Not least because Neil Warnock has not picked a single player under the age of 23.

In the summer we said: Omar Bogle
The forward got a move to Birmingham for the season but most of it so far has been spent on the bench.

CHELSEA: Ruben Loftus-Cheek
One start in the Premier League this season after playing in the World Cup has been quite the reality check for the Chelsea midfielder. Loftus-Cheek has had rather more joy in the Europa League and EFL Cup and Maurizio Sarri has said he is keen to keep working with the 22-year-old, especially on his movement off the ball. But there appears little prospect of his Premier League chances improving if circumstances don’t change. Surely playing every week has to be better for Loftus-Cheek’s development than the odd cup match? If Sarri softens his stance, there would be no shortage of takers.

In the summer we said: Danny Drinkwater
Not in Sarri’s plans, nor in a hurry to do much about it.

It’s been a memorable 12 months. This summer will live long in the memory for me 🏴󠁧󠁢󠁥󠁮󠁧󠁿. The support during the World Cup was incredible. Scoring my first ever hat-trick for Chelsea was also a very proud moment 💙. Wishing everyone a Happy New Year and here’s to a great 2019 🥳🤩🎊🎉 pic.twitter.com/REfjSeUiak

CRYSTAL PALACE: Luke Dreher
He made two Premier League benches under Alan Pardew, and was praised as a “talented young player” by Frank de Boer, but a promising career has stalled somewhat under Roy Hodgson. Former U18 Player of the Year Dreher saw hip and calf injuries decimate his 2016/17 season, while knee surgery further harmed his development. Back in full training since the summer, he needs a fresh start.

In the summer we said: Nya Kirby
It looks likely that the England Under-17 World Cup winner will get away this month, with Charlton and Blackpool apparently keen.

EVERTON: Tyias Browning
January started with Mason Holgate and Kieran Dowell getting out of Goodison for the rest of the season and Browning should follow suit. It could be a gamble given exits for Browning and Holgate leaves 36-year-old Phil Jagielka as Marco Silva’s only specialist cover at centre-back but the former has not played a minute of first-team action this term which is absolutely no use to a player approaching 25.

In the summer we said: Matthew Pennington
The centre-back went on loan for the season to Ipswich. He has played all but one game but the 24-year-old hasn’t been able to help reverse Town’s slide towards League One.

Luca de la Torre scored for Fulham U23s today in their 2-1 over Birmingham City in the PL Cup. He seems to be outgrowing the U23 level and really should be getting minutes in a first team environment. Loan move in January perhaps? pic.twitter.com/KKPfGR1FHv

In the summer we said: Tayo Edun
Went to Ipswich but he hasn’t been seen in the first team since Paul Lambert took over. An eye injury hasn’t helped.

HUDDERSFIELD TOWN: Adama Diakhaby
Prior to injuries to Aaron Mooy and Danny Williams, it seemed likely that Juninho Bacuna would return to the Eredivisie this winter to get some football. But the 21-year-old Dutch midfielder started twice last month after three substitute appearances so he seems certain to reject whatever offers come his way. Diakhaby would most likely be more open to a move. The centre-forward only joined Town in the summer from Monaco but he has played one solitary minute in the Premier League since September. It’s hardly as though Town’s other forwards are doing the business…

In the summer we said: Tareiq Holmes-Dennis
The full-back’s injury problems have followed him to Bristol Rovers but things might be looking up for Holmes-Dennis.

LEICESTER CITY: Fousseni Diabate
The Mali international has been limited to just a single Premier League appearance this season and whether he leaves on loan or permanently this month depends on whether Claude Puel reckons the 21-year-old has the potential to make the step up that he has failed to so far since joining from Ajaccio last January.

In the summer we said: Hamza Choudhury
Until recent weeks, we would have suggested again that the England Under-21 look to move this month, but Choudhury has started three of the last four matches and he has been bloody impressive too.

In the summer we said: Harry Wilson
Tearing it up at Derby.

League goals scored from outside the box this season:

MANCHESTER CITY: Philippe Sandler
Sandler was City’s second-most expensive signing last summer when he joined from PEC Zwolle for £2.6million. He arrived with a knee injury but now fit, the 21-year-old needs more game time than City’s Under-23s can offer. The centre-back, who can play as a holding midfielder, made the bench for the Carabao Cup quarter-final against Leicester and has been linked with Galatasaray.

In the summer we said: Patrick Roberts
The winger was doing okay at Girona until his hamstring went twang last month.

MANCHESTER UNITED: Scott McTominay
Jose Mourinho invented an award at the end of last season just so he could reward the young Scot for standing by his side through the storms, but the manager is now gone and he seems to have taken McTominay’s first-team hopes with him. The midfielder was linked with a January loan switch before the axe fell upon Mourinho – usual Championship suspects Aston Villa and Leeds were mentioned. Let’s face it, he’s not really very good. But he’s a trier.

In the summer we said: Joel Pereira
Currently tending to Vitoria Setubal’s goal back home in Portugal.

NEWCASTLE UNITED: Freddie Woodman
“January is around the corner and I have to be prepared for it when it comes,” says Newcastle United’s fourth-choice goalkeeper Woodman, who was denied a fifth loan spell this summer because of a contract dispute with the club. A lack of football has cost him his England Under-21 place after winning the Toulon tournament this summer; no wonder he calls it a “bad situation”. He must look at Dean Henderson at Sheffield United and want to weep.

In the summer we said: Freddie Woodman
Just let him go, Rafa.

SOUTHAMPTON: Harry Lewis or Jack Rose
Lewis, 21, and Rose, who will be 24 when the window shuts, are vying for the role of Southampton’s third or fourth-choice goalkeeper, depending on Fraser Forster’s status. Rose has been restricted to Under-23 football this season while Lewis, after spending last season on loan at Dundee United, has been limited to Checkatrade Trophy action, with Cambridge and Southend combining to put seven past the academy graduate. There has got to be more to life…

In the summer we said: Sam McQueen
Schlepped up to Middlesbrough for the season only to rupture his knee ligaments.

TOTTENHAM HOTSPUR: Georges-Kevin N’Koudou
Mauricio Pochettino remembered the winger for the last 27 minutes of the Carabao Cup win over West Ham but he hasn’t been seen since that clash on Halloween night. The 23-year-old just needs to get away from White Hart Lane however best he can.

In the summer we said: Kyle Walker-Peters
Had the full-back departed when we said he should have, he wouldn’t have started against Barcelona at the Nou Camp, nor laid on three assists during his first Premier League start last month. But then he probably would have played more than 253 minutes during the first half of the season so, swings and roundabouts…

WATFORD: Ben Wilmot
It was quite the coup when Watford signed the very highly-rated Wilmot for £1m for Stevenage, but the teenager has so far been restricted to Carabao Cup action and just two minutes of the Hornets’ Premier League campaign. Javi Gracia has been impressed with his versatility – playing the centre-half in central midfield – and that could stand him in good stead for some Championship action this month.

In the summer we said: Jerome Sinclair
The former Liverpool youngster has scored a single goal in League One for Sunderland this term.

WEST HAM: Reece Oxford
Three loans in and he is somehow still only 19. He is clearly a trillion miles from being considered by Manuel Pellegrini and is now merely held up as an example of a player who lost his way after being given a big contract. He is reportedly the reason the Hammers held back for so long with Declan Rice. Oxford is currently captain of West Ham’s Under-23 side but he could surely find more fulfilling work away from east London.

In the summer we said: Josh Cullen
The midfielder was impressing at Charlton before he dislocated his shoulder in November.

WOLVES: Elliot Watt
The 18-year-old has captained Wolves Under-23s earlier this season after making his Scotland Under-21s debut in the summer. Then followed his senior debut for Wolves, with the midfielder playing an hour in the EFL Cup win at Sheffield Wednesday. A Football League loan is surely next.

In the summer we said: Kortney Hause
Looks likely to join Villa permanently this month.