Home F365 Features Cup of sugar? One player from every PL club ripe for a loan 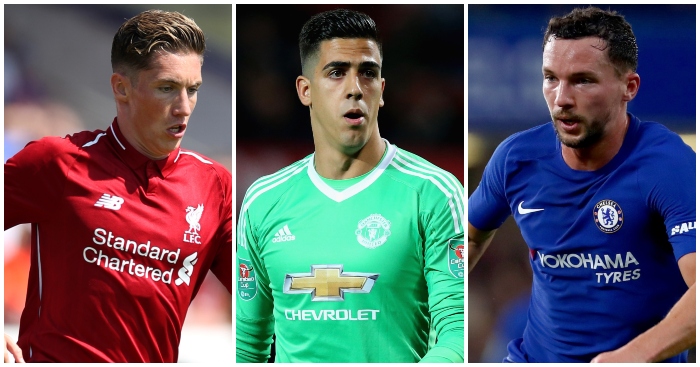 Arsenal: Matt Macey
The former Bristol Rovers youth product will be 24 by the time the new season is a month old and though he finally saw some first-team action in the League Cup and Europa League last season, Bernd Leno’s arrival pushes him even further down the pecking order at the Emirates. David Ospina is likely to leave, though Emiliano Martinez is back from his own loan spell, so Macey needs to get his gloves dirty somewhere else for a season.
In January we said: Chuba Akpom. He got his loan move but six goals in 16 appearances for Sint-Truiden in the Belgian league is unlikely to impress Emery.

Bournemouth: Connor Mahoney
Bournemouth were recently told to pay £425,000 plus further add-ons for the 21-year-old winger they signed last year from Blackburn but another spell away from Dean Court appears to be the best immediate use of that investment. The former England youth international made two starts in the FA Cup last season before being sent to Barnsley where five of his eight appearances came off the bench.
In January we said: Lys Mousset. The striker played some part in all but two of Bournemouth’s Premier League matches in 2018, so maybe he was smart to stick around.

Brighton: Jiri Skalak
The Czech winger needs to leave the AmEx to remind everyone that he still exists. Skalak failed to make a single Premier League appearance last season; he couldn’t even earn a place on the bench beyond September. Three starts came in cup competitions and he escaped the cut when the 25-man squads were renamed in the winter but Chris Hughton has at least three better options to play on his left wing. A year from free agency, Skalak needs to generate some interest.
In January we said: Kazenga LuaLua. Brighton went even further and allowed him to leave permanently and join Sunderland for the rest of the season. It did not go well.

Burnley: Aiden O’Neill
The Australia midfielder spent the first half of last season at Fleetwood Town before being recalled prior to the AFC Under-23 Championships. Upon his return, O’Neill made the Burnley bench twice but the 20-year-old has not kicked a ball in English football since December 22.
In January we said: Aiden O’Neill. After a loan to Scunthorpe fell through, we said he needed another League One side to step up. None did.

Cardiff: Omar Bogle
Bought a year ago from Wigan for £1million but loaned to Peterborough half a season later. A single goal in League One hardly enhanced his prospects and with Neil Warnock needing to trim his squad, Bogle will surely be among the first to be shipped out.
In January we said: n/a

Chelsea: Danny Drinkwater
The players within Chelsea’s loan army are in the midst of being dispatched to their various posts across Europe. But Drinkwater remains and with the deadline not long away, the £35million midfielder seems no closer to getting the move he needs to play football again. Chelsea are said to want to recoup most of their investment in the former England international, but the prospect of a try-before-you-buy deal will grow stronger as August 9 creeps closer.
In January we said: Baba Rahman. Got his temporary move to Schalke. As ‘temporary’ as 18 months can be.

Crystal Palace: Nya Kirby
Palace have a dilemma over the 18-year-old midfielder who left the Eagles’ pre-season tour to join up with England for the U-19 European Championships. Regular competitive football would likely benefit Kirby but Roy Hodgson’s central midfield options are currently limited after losing Yohan Cabaye and Ruben Loftus-Cheek. Palace may look to keep Kirby around the first-team squad before perhaps allowing him to spread his wings in January.
In January we said: Chung-Yong Lee. Denied a loan move to Bolton because of an injury to Bakary Sako and played 21 minutes spread out over five Premier League appearances.

Everton: Matthew Pennington
The centre-half spent last season at Leeds where he underwhelmed for most of an injury-hit campaign that saw him make 15 Championship starts. Still, Everton reckoned he was worth a new three-year deal in May, but he doesn’t yet look ready for Premier League football, especially given the number of senior defenders ahead of him in the pecking order at Goodison Park.
In January we said: Davy Klaasen. Had the chance to go to Napoli but the midfielder refused to grab it because of a dispute over image rights. So he stayed and played a whole hour’s worth of Premier League football during the second half of the season.

Fulham: Tayo Edun
The former England Under-19 defensive midfielder played four games in Fulham’s first-team last season and that contribution is unlikely to increase as the Cottagers embark on their first season back in the Premier League. Edun, 20, has been linked with a loan move to MLS, while there was also said to be interest from Ipswich and Shrewsbury.
In January we said: n/a

Huddersfield: Tareiq Holmes-Dennis
The left-back lost a year last season when he suffered a season-ending injury on the opening day of a campaign which he planned to spend at Portsmouth. The 22-year-old will have to try again.
In January we said: Michael Hefele. The centre-back featured in a couple of FA Cup matches and the Premier League trip to Old Trafford. Now being linked with a permanent move to West Brom.

Leicester: Hamza Choudhury
The England Under-21 defensive midfielder was given his opportunity in Claude Puel’s first team last season, playing a part in the final seven matches. But by the time the new season starts, the Foxes treatment room will be nowhere near as congested and Puel has other midfielders returning from loan spells. Choudry, 20, would likely benefit from one of his own.
In January we said: Ahmed Musa. Returned to CSKA Moscow where he warmed up for the World Cup with six goals in 17 appearances. It seems to have been enough to attract a daft offer from Saudi Arabia.

Liverpool: Harry Wilson
The attacker scored seven goals in 13 Championship appearances for Hull last season and with opportunities limited at his parent club, there is a lengthy queue forming outside Anfield of Premier League promotion hopefuls wanting the 21-year-old who signed a new deal with the Reds last week.
In January we said: Daniel Sturridge, to a) prove he has two working legs and b) give himself an outside chance of going to the World Cup. He achieved neither.

Manchester City: Patrick Roberts
The winger was set to be heading to Leicester as part of the Riyad Mahrez deal but Leicester insisted on a cash-only transaction, leaving Roberts a step back in the queue for a first-team place at City. The 21-year-old has been linked with a return to Celtic but after two and a half seasons in the SPL, the time has come for Roberts to test himself elsewhere.
In January we said: Tosin Adarabioyo. Played a single minute in the first team in 2018.

Manchester United: Joel Pereira
The signing of Lee Grant to act as second stand-in enables the stopper described by Jose Mourinho last year as “the best Portuguese goalkeeper of the next generation” to get away from Old Trafford and dirty his gloves in a competitive environment. Real Betis, Sevilla, Real Sociedad, Torino, Atalanta and Fiorentina are among the clubs said to be willing to give him a goal to guard.
In January we said: Axel Tuanzebe. Went to Aston Villa but made only five appearances on their run to the play-off final. Steve Bruce wants him back for another stint, though…

Newcastle: Freddie Woodman
The England Under-21 stopper continued his development last season by making his first-team bow at St James’ Park before heading to Aberdeen for half a season in the SPL. With four other senior stoppers currently training with the Magpies in Ireland, it seems a season somewhere in the Championship would serve Woodman better than watching from the bench or the stands.
In January we said: Jack Colback. Went to Forest and he looks set to return to the City Ground this summer.

Southampton: Sam McQueen
The versatile left-sider managed 90 minutes once last season – the creditable 0-0 draw at Manchester United – but he reappeared around the first team under Mark Hughes when backsides were twitching at St Mary’s. Matt Targett’s return from loan offers cover for Ryan Bertrand while Mohamed Elyounoussi’s arrival further increases competition on the left-wing. However he leaves, temporarily or permanently, McQueen seems most likely to start next season away from Southampton.
In January we said: Josh Sims. We said he needed to play and he did – a bit. One Premier League start and a few more appearances off the bench, though he saw only 17 minutes of action under Hughes.

Tottenham: Kyle Walker-Peters
The England Under-20 World Cup winner needs more action than the five starts he was given in all competitions last season but with Kieran Trippier and Serge Aurier around, it seems only injuries would allow Walker-Peters that platform at Spurs.
In January we said: Kyle Walker-Peters. Kept around by Pochettino for a couple of appearances in the early rounds of the FA Cup and a final-day start in the league.

Watford: Jerome Sinclair
The Watford squad is currently even more bloated than last season when Sinclair barely saw any action anyway. The youngest ever player to represent Liverpool has spent the five years since his debut aged 16 going backwards and a year after being left stranded at Sheffield train station after his agent changed the terms of a loan move to United, now the 21-year-old really has to get out and play.
In January we said: Jerome Sinclair. Stayed through January too and played nine whole minutes in the Premier League since the turn of the year.

West Ham: Josh Cullen
The Republic of Ireland Under-21 player of the year remains highly rated at West Ham but Jack Wilshere’s arrival nudges him back down the pecking order. Charlton were reported to be keen but having spent the first half of last term in the Championship with Bolton and the remainder of the campaign around the Hammers’ first-team, a return to League One, where he impressed with Bradford in 2016-17, seems a step too far back.
In January we said: Toni Martinez. Scored one goal in 10 appearances after a deadline day loan move to Real Valladolid.

Wolves: Kortney Hause
The 22-year-old former England Under-21 defender signed a new three-year contract in May despite enduring a “frustrating” season during which he played a total of seven minutes in Wolves’ Championship charge to the title. An injury would put him firmly in contention but Hause can ill afford another year like the last.
In January we said: n/a