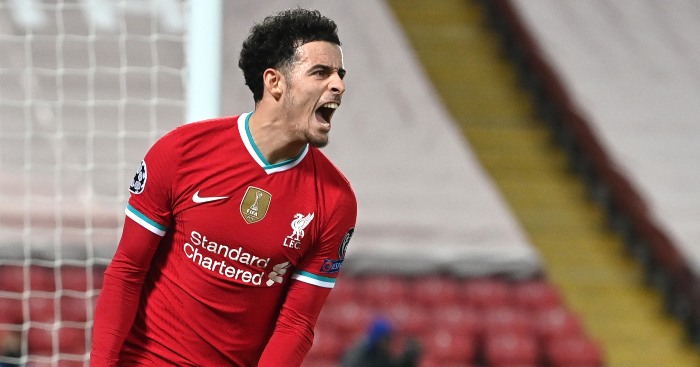 The story is that Everton turned down Curtis Jones as a six-year-old because they thought him ‘too cocky’ and were irked that the young boy ‘modelled himself on Cristiano Ronaldo’, who was then in the midst of some ridiculous form for Manchester United. Perhaps they thought he should have been hero-worshipping Leon Osman instead. Cockiness is far from a likeable trait in a six-year-old but the short-sightedness is astonishing; Everton’s loss has been very much Liverpool’s gain. While nobody would rush to claim that Jones will ever be the equal of Ronaldo, it’s fair to say that the Juventus forward would be very happy indeed with Jones’ finish for his first Champions League goal.

The remarkable thing is that Jones was fully 14 yards from goal when Neco Williams’ in-swinging cross left his boot; he was but two yards from goal when he finished neatly with the outside of his right boot after some bizarre goalkeeping from Victor Onana. Jones gambled – perhaps that is pure cockiness – and was richly rewarded.

Ajax’s keeper won’t want to see this one again though… pic.twitter.com/j8jebhaeYN

That story about Jones’ cockiness certainly chimes with Jurgen Klopp confirming that the midfielder “has no issue with self-confidence” and “absolutely doesn’t struggle in that department”, while Under-23 boss Neil Critchley said “self-belief is probably not one of his weaknesses, but that is also why he is who he is”. That trait – seen as a flaw by Everton – has undoubtedly helped in a season which he has been thrust headlong into the first-team picture by Liverpool’s raft of injuries. He has already played more minutes this season than last, and not once looked like the weakest link.

Immediately against Ajax, he took up a position on the edge of the box that almost earned him a spectacular goal in the opening minutes. Not for Jones the natural inclination of a young footballer in a team of Premier League champions; he is never deferential and never content with simply doing little wrong. As Liverpool fought for a place in the knock-out, Jones took more shots than any of his teammates. In a week which saw him compared to Sadio Mane, he looked a far greater threat than the man who has now scored just once in ten games.

The one criticism that could be aimed at this remarkable Liverpool side over the last two or three extraordinary years is that the midfield oft-times looked stodgy, armed with workers rather than performers. The signing of Thiago is one step towards a change in that department but you can also add Jones’ name to that evolution roll-call; there is nothing stodgy about a teenager who might still dream of being more Ronaldo than James Milner.

This was a night for Liverpool’s young players but while you would not be surprised if neither Williams nor goalkeeper Caoimhin Kelleher plays more than 50 games for the Reds, Jones could have a truly wonderful future. Maybe cockiness is not a curse after all.