Home F365 Says Damning United: No direction, no plan, no style, no hope 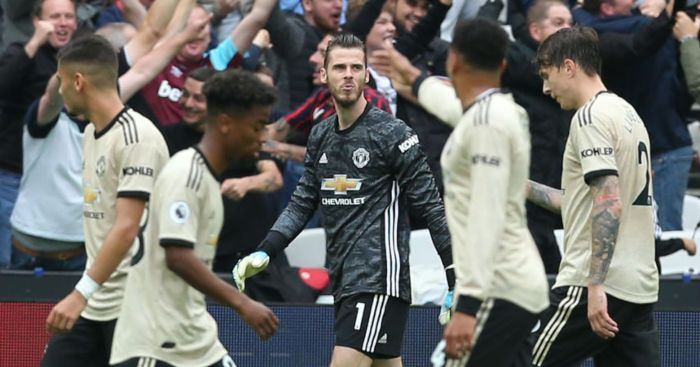 “It was difficult but we had to deliver against perhaps the best team in the world,” said Daniel Farke. “We have a lot of long-term injuries so it will be difficult. So we need this spirit and attitude because there will be setbacks and difficult moments and that’s when we will need our togetherness, and to remember moments like today.”

The above quote came to mind when watching Manchester United toil against West Ham. They were without Paul Pogba, Anthony Martial, Mason Greenwood and Luke Shaw. They were without hope, guidance and a semblance of direction, too, but the manager is never likely to address that in a pre-match press conference when discussing team news.

Norwich, a promoted side, had eight players sidelined when they hosted the Premier League champions. They saw their injuries not as an excuse, but as a way to strengthen their resolve and engender a greater sense of unity.

But the most poignant thing Farke mentioned in the aftermath of that sensational Manchester City result was to note that “we did it in our style”. It was no smash and grab, no backs-to-the-wall job. Norwich imposed themselves on their visitors and forced individual mistakes instead of patiently waiting for them. The identity of their absentees did not matter as each player knew their role, both as an individual and as part of an overall unit, and embraced the challenge.

Max Aarons was out, but Sam Byram was a capable replacement. With Tom Trybull unavailable, 33-year-old Alex Tettey stepped in for his first start of the season. Summer signing Ibrahim Amadou happily played out of position to accommodate the lack of Timm Klose and Christoph Zimmermann.

So Ole Gunnar Solskjaer cannot possibly use injuries to explain defeat to West Ham, nor attempt his usual trick of pretending that Manchester United created an overwhelming amount of chances they simply could not finish. His side – his management – was not good enough in isolation. As part of the wider context, it was almost unforgivable.

If Norwich can prioritise their “style” to beat considerably superior opposition in tasking circumstances, Manchester United should be embarrassed that they cannot do similar.

Of the eleven players that finished the game at the London Stadium, only two have scored more than three career Premier League goals. One was the 34-year-old left-back who conceded the decisive free-kick; the other was asked to lead the line despite his last goal or assist in all competitions coming on January 29.

This is an off-pitch aberration compounded by on-pitch failure. For all Romelu Lukaku’s flaws, for what little Alexis Sanchez offered, for how expensive a competent central midfielder would have been, those summer decisions provided such dilapidated and derelict foundations that Solskjaer’s planned rebuild was doomed from the start.

The most frustrating aspect is that such boardroom choices, while proven to be irresponsible in hindsight, were at least a result of clarified thinking. They came from a position of sensibility, as part of a wider plan to replace deadwood with grand, solid oak. These were the wrong calls made in the right way.

The appointment of Solskjaer in March was the opposite: a reactionary lurch made for short-term benefits with no real consideration of the future.

He has been promoted beyond his experience and, very possibly, his coaching acumen. That is not his fault – turning down the job would have been ludicrous, particularly then – yet that should not and does not absolve the manager of blame. He shouldered the burden of promoting Mason Greenwood to third-choice striker, which looked particularly foolish when Marcus Rashford pulled up with an apparent hamstring injury in the second half as the teenager recuperated from tonsillitis. United sold a forward for £73m and loaned another out to the same club last month, and are now ending games with Jesse Lingard and Daniel James up front.

In midfield, one injury has partnered Scott McTominay with Nemanja Matic for a midfield more pedestrianised than Norwich’s city centre. They are guarding a defence that looks less assured with each game, and supplying an attack comprised of a past-it Juan Mata and a never-quite-it Andreas Pereira.

Fred came on for the final 20 minutes, was poor and still created more chances than any of his teammates. Mata was playing about 30 seconds later than everyone else and yet no United player had more shots. Angel Gomes was given ten minutes to change the game, only because the only other alternatives were Sergio Romero, Marcos Rojo, Axel Tuanzebe and Tahith Chong.

How has it come to this? What do Manchester United stand for? This is not a team, contrary to popular belief, that favours youth more than any other in particular. They have scored as many goals this season as Manchester City did against Watford on Saturday. They have kept three clean sheets in 18 Premier League matches.

If this is a counter-attacking team, why have only four clubs had more possession per game on average? If this is a passing side, why did Declan Rice so thoroughly embarrass his two older, more experienced direct opponents? If United have a future under Solskjaer, why has a handful of injuries completely and utterly neutered them?

Therein lies much of the problem: defeats can be accepted if they are as part of a journey with an identifiable route. Fans and neutrals alike are more forgiving if they can at least see where things are headed, even if the final picture is somewhat obscured. It is not quite so easy to sell stagnation to the masses when that is the message both in the boardroom and on the pitch. West Ham have finally learned the advantages of having a clear plan – and many more words should and will be dedicated to them in the coming days.

But for now, there is a story to be told at Old Trafford. Norwich’s most expensive summer signing cost 20 times less than United’s least expensive. That only one of those sides has anything resembling a “style” is incredibly damning.