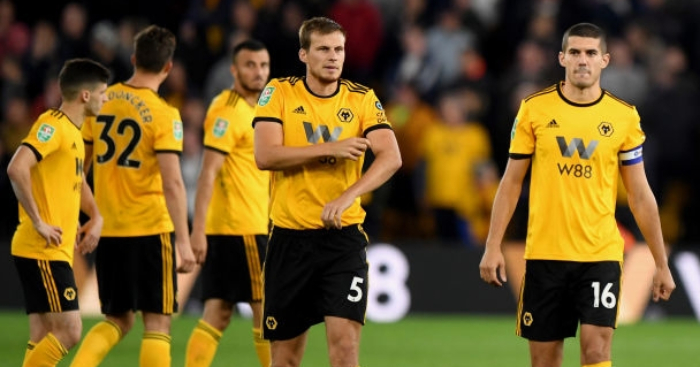 One of the commandments of Twitter is that no decision can ever be unanimously popular. On Sunday, the official England account tweeted that Brighton central defender Lewis Dunk had replaced the injured James Tarkowski in the latest squad. If that did not seem like a particularly controversial call – this would only make Dunk seventh in line to play at centre-back after all – you had overlooked that aforementioned golden rule.

The replies were predictably angry, but the identity of the central defender apparently unfairly shunned by Gareth Southgate was surprising. ‘And still no Coady,’ read the first. ‘Where is Coady?’ asked another, presumably a rhetorical question rather than an attempt to start a footballer treasure hunt.

On and on they went: ‘Dunk over Coady?’, ‘Shocking that Coady isn’t in the squad’, ‘Starting to question whether Southgate even watches Coady’. Moaning that your players are being mistakenly overlooked for international duty and that your club isn’t getting the credit it deserves. You aren’t truly a fan of a Premier League club until a little paranoia creeps in.

To those who don’t watch Wolves regularly, the ‘Conor Coady for England’ bandwagon might seem a little far-fetched. So much of the media coverage surrounding Wolves focuses on their army of Jorge Mendes clients. When a Championship club signs eight Portuguese players in the same summer and smashes the transfer record for a second-tier club, people take notice. The intricacies of Wolves’ ownership structure and relationship with a super-agent makes their assault on the Premier League unique within English football. Like it or not, Wolves are breaking new ground.

It seemed impossible for them to overachieve this season, given the sky-high ambitions of Fosun International and Mendes. Yet it is faintly ridiculous just how quickly they have settled into Premier League life. Nuno has selected the same team for eight successive matches – a record at the start of a top-flight season – but that decision has been made easy by the performance level of Wolves’ players. Only the top three (Manchester City, Liverpool and Chelsea) have lost fewer matches. Only the same three have conceded fewer goals.

If the argument is that Wolves have not played many top teams (only Manchester City from the current top six), the counter is that five of their eight league matches have been against top-half teams from last season. And they did draw with City having led.

Consolidation, the minimum expectation of Wolves’ owners for 2018/19, is far easier said than done. There were doubts before last season about Nuno’s ability to blend new, high-profile names with old faces, and doubts before this campaign about whether everyone was getting a little bit carried away. Wolves only had nine more points than Cardiff City. The first-team squad that sealed promotion shared 51 international starts between six players. Four of those players – and 36 of those starts – left in the summer.

The nagging doubt was not whether Ruben Neves, Joao Moutinho, Raul Jimenez, Willy Boly and Rui Patricio could flourish in the Premier League, but whether the club’s other players could make the necessary step up to join them. Top-flight managers are perfectly capable of devising strategies to exploit the flaws of promoted clubs – see Slavisa Jokanovic and Fulham for details. A promoted club is only as good as its three weakest starters, or at least its three most inexperienced.

It is here where Wolves’ performance level has been most striking. Coady’s previous Premier League experience amounted to three minutes in May 2013 as a substitute for Liverpool, but the captain has been magnificent in the heart of a three-man central defence. His passing accuracy has been higher than Harry Maguire’s, proof that he might indeed fit England’s demands.

Next to Coady, Ryan Bennett has been the surprise ever-present in Wolves’ team. The arrival of Leander Dendoncker from Anderlecht, a central midfielder by trade but with the ability to play in defence, was viewed as bad news for Bennett. Having joined from Norwich City on a free transfer in 2017, he was eminently dispensable. Instead, Bennett has outlined his importance, with only five players managing more headed clearances. His presence is proof that style can only succeed if matched by steel.

And then there’s Matt Doherty, whose previous top-flight experience consisted of 44 minutes for Wolves in 2011/12 and 13 Scottish Premier League appearances on loan at Hibs in the same season. Supporters at Molineux would happily have taken ten minutes of your summer to wax lyrical about their wonderful attacking right wing-back, but few of them predicted this impact. No defender in the league has had more touches in the opposition penalty area. Doherty beat Eden Hazard to be named the PFA’s Premier League Player of the Month for September.

This is the biggest justification for holding Nuno up as worthy of discussion for elite jobs. He may have got the gig because of who he knew, but he is succeeding because of what he knows. He has got the best out of what he found as well as what he has been given. The pressure on him was almost as high as the initial cynicism; Nuno has delivered above and beyond expectation.

Wolves’ League of Nations team that has started all eight matches contains five Portuguese players, one Spanish, one Mexican and one French, but it is the British and Irish collective that has led the club. Gestifute might command the Molineux headlines, but another player representation agency deserves credit too. World in Motion count Coady, Bennett and Doherty among their clients, and Wolves should not overlook their unheralded heroes.