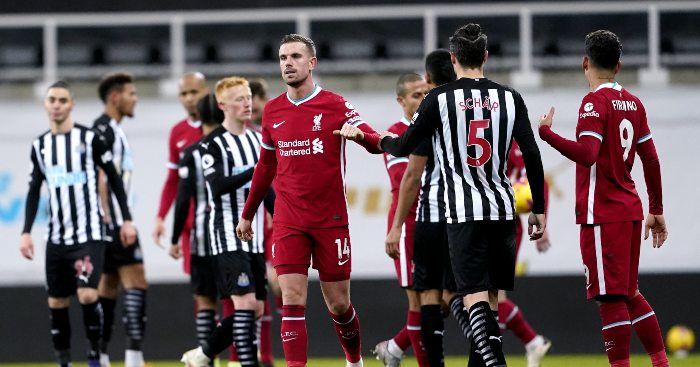 Danny Murphy has urged Liverpool to replace Nathaniel Phillips with Jordan Henderson at centre-back as the defender “struggled” in their 0-0 draw against Newcastle United on Wednesday night.

Mohamed Salah missed the target either side of half-time with just keeper Karl Darlow to beat, and strike-partner Roberto Firmino, who saw two headers superbly saved, was similarly profligate at St James’ Park.

Three days after lowly West Brom struck late to snatch a point at Anfield, Jurgen Klopp’s men – who have now won only two of their eight league away games this season – were frustrated once again, although it took a late goal-line clearance from Fabian Schar and Darlow’s brilliance to keep them at bay.

MAILBOX: All the reasons why Liverpool can’t win the title…

At the other end, Callum Wilson’s pace troubled the Reds’ backline on occasion and Murphy reckons Henderson should move back into defence with Phillips coming out of the line-up.

“I think he [Phillips] struggled a bit at times. He got the booking in the second half when he was out of position a couple of times,” Murphy told Stadium Astro.

“He looked a bit nervy tonight, I think in the forthcoming games we’ll probably see a change there. I’d be surprised if he keeps his place, to be honest.

“I know he gives that aerial presence, but depending on who you play against, I don’t think you can only be in the team for that, you need a little bit more.

“He has played Rhys Williams, he’s played Jordan Henderson there, we’ll have to wait and see. I think he was a bit in awe of Wilson at times, a bit in fear of him, you could sense it. I felt uneasy when he was around Wilson. They still kept a clean sheet, to be fair to them.”