Home Watford Danny Welbeck is Dat Guy that we all adore… 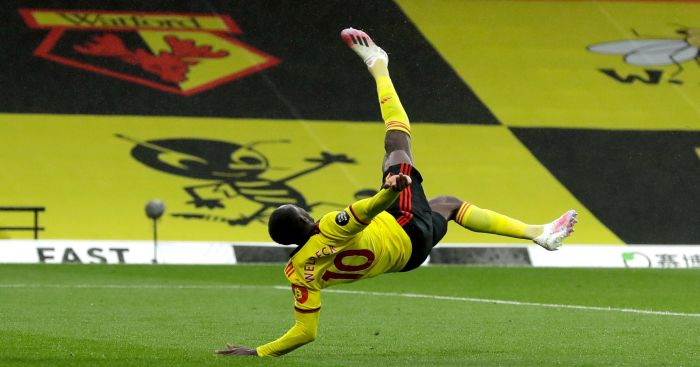 In the tribal, bitter world of modern football it feels like being a former Manchester United and Arsenal player who is still thought of fondly by fans of both clubs and most neutrals is a pretty unlikely achievement.

Yet there can’t have been many football fans who weren’t pleased to see Danny Welbeck’s ridiculous overhead kick winner for Watford on Tuesday night. Norwich fans probably didn’t enjoy it that much, which is fair enough. Villa, Bournemouth and West Ham fans could probably have done without it, sure. But for everyone else, it’s just a nice thing to have happened, isn’t it?

And to top it all off a goal like that was always destined to produce a wonderful Opposition Goal Tweet, which is just another lovely bonus.

Watford take the lead. An effort from Sarr finds its way to Welbeck who overhead kicks it into the top left corner.#WATNOR 2-1 (56)

And that’s what Welbz did, in the process scoring his first Premier League goal since a last-minute points-sealer for Arsenal against West Ham back in August 2018.

And there’s the rub, isn’t it? It’s a lovely thing for people to like you (I imagine) but for a professional footballer there’s almost always going to be a bittersweetness. Welbeck is liked for many reasons, and important among them is seeming like a thoroughly decent chap. Not insignificant among them is a very decent record for England.

Also, it doesn’t hurt that thanks to a 2013 tweet from former team-mate Ravel Morrison, Welbeck is the subject of one of online football fandom’s most enduring memes.

forever & ever will be Dat Guy welbz , legendary 🖤

But a big part of it is sympathy. Welbeck’s has been a career that despite 16 goals for England and lengthy stints at two of the biggest clubs in the world (no offence to Watford) just feels like it never quite happened. Welbz may be Dat Guy in every other way, but as a truly elite professional footballer the harsh but fair assessment is that he just isn’t quite.

Despite spending a decade in the Premier League he has still only just sneaked over 200 top-flight appearances. He didn’t reach 100 games in the competition for either United or Arsenal. He’s played 30 games in a season just once and, most ludicrously of all, never once reached double figures for goals in a Premier League season.

Tuesday night’s goal was only his 43rd in the Premier League. Little wonder people are so easily able to have a soft spot for him. If he played for your club he was a decent guy and a wholehearted, obviously talented and committed performer; if he didn’t he most likely never inflicted lasting painful damage on you.

Injuries are a huge part of all this, of course. His Arsenal career in particular was destroyed by a series of problems. Knee, groin, hip, ankle, toe and other issues combining to rule him out of a desperately frustrating 113 games in five years at the Emirates. You’d have to be a genuine arsehole for people not to feel a bit of sympathy for that.

And Welbeck just definitely isn’t an absolute arsehole. There’s every chance now that Watford will survive and Welbeck’s stunning winner against Norwich may well prove crucial. You’ve got to be happy about that.

Maybe this can be the start of a late blossoming career. He’s still not 30, and the upside of all the setbacks is that there are relatively few miles in those legs. Maybe Watford can kick on next season and Welbeck can stay injury free and smack in 20 goals. Wouldn’t that be lovely? It wouldn’t just be Watford fans who were celebrating. Nobody would begrudge him that.