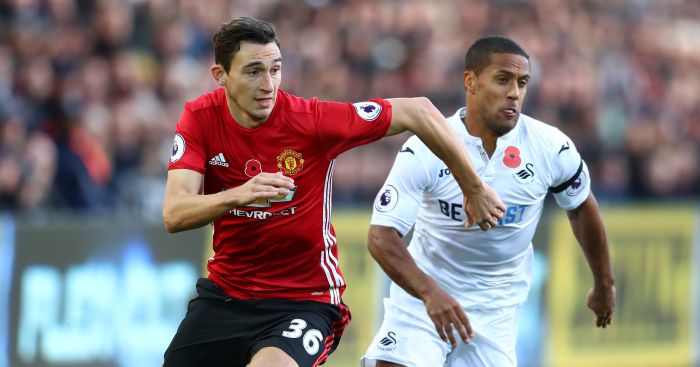 Matteo Darmian thinks Manchester United can still compete for the Premier League title if they “play with their hearts” on the pitch.

United haven’t had the best of starts under Jose Mourinho and currently trail league leaders Liverpool by eight points as the season draws closer to the festive period.

Following the international break, the Red Devils will return to action against Arsenal at Old Trafford in the early kick-off on Saturday.

And Darmian is expecting a “focused” performance from United as they look to close the gap on the summit.

“The players, we have a responsibility,” Darmian told the Daily Mail. “We have to do more out there on the pitch. We have to play with our hearts.

“I am feeling confident. After this break, we now have to be focused on the next game. It’s a big game against one of our big rivals for the title. We have to prepare in just two days of training but we need three points and we have to be focused to get that.”

Many critics have questioned United’s ability to win the title but Darmian believes they are still in the race if they go on a good run of results.

“Of course we can still compete for the title,” Darmian continued. “What we have to do now is go on a run of good results, win a lot of games in a row. We are still the race.

“Sometimes we have been unlucky. We have missed a lot of chances against Burnley, where the goalkeeper was fantastic, and Stoke. But we didn’t score enough. So we have to improve, we have to work hard and get on our good way.

“Swansea can be a turning point for us, a point of beginning. Now on Saturday against Arsenal we have to win.”