Home All The News Darmian: I think I took Man United chance 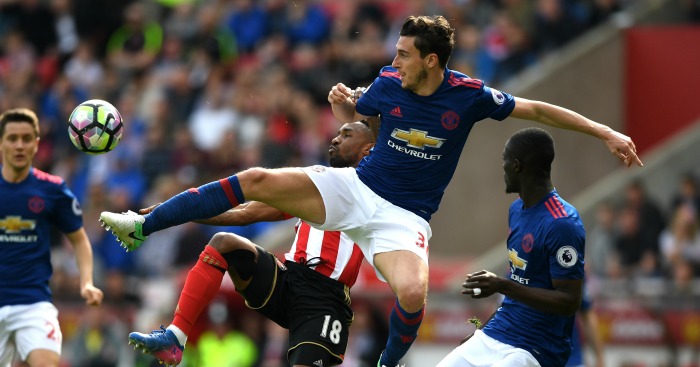 Matteo Darmian returned from the cold and helped Manchester United to a much-needed victory over the weekend – proof of the full-back’s pledge to be ready whenever Jose Mourinho needs him.

Injuries have depleted United’s options recently, leading the 27-year-old to make his first Premier League start in 12 weeks at Sunderland.

It was just Darmian’s 19th appearance of the season in all competitions and an opportunity the versatile full-back took well as Mourinho’s men emerged 3-0 victors at the Stadium of Light.

The lack of game time has fuelled talk of a Serie A return, but the Italy international’s main focus right now is ending a taxing campaign strongly, both on an individual and collective level.

“I think I always work hard to be ready for when the manager gives me an opportunity,” Darmian said.

“I think I took it but I have to be focused and I have to work for it. And that’s it.

“When the manager gives me another opportunity, I have to be ready to help the team.

“The most important thing was the victory, though.

“We hope to play as many games as possible because it means we are staying in the competition.

“Of course, I think it will be a busy period but we are ready. We have enough players to cope with it.”

While rock-bottom Sunderland were never likely to prove much competition, especially after Sebastian Larsson’s first-half sending off, it was a timely result after what Darmian concedes were two “not very good” home league draws.

It moves United to within four points of a Champions League berth, while Europa League glory offers another route to European football’s top table.

Mourinho’s side resume their bid for continental glory in Belgium on Thursday, when they face Anderlecht in the first leg of their Europa League quarter-final.

“I think it will be a difficult game for us,” Darmian said.

“We want to progress into the semi-finals so we now have to recover well and start about this game because I think it will be very difficult out there.

“We have to be concentrated and try to play with good intention and focus. We will try to win as well.”

Asked if the tag of competition favourites brings added pressure, he added: “Of course, but I think we are in the Europa League and we always knew there is the possibility to win the trophy.

“We try, we will try. We know that we can do it but we have to demonstrate it on the pitch.”

“We know it’s a big game as it’s another route into the Champions League, which is very important for us and the club,” he said. “We want to go there and get the victory.

“We know it’s going to be tough but it’s who’s better on the day.

“If we can go there with the right mentality, as I’m sure we will, I think we’ll win.”