Home Uncategorized Darmian: Rashford can be one of the world’s best 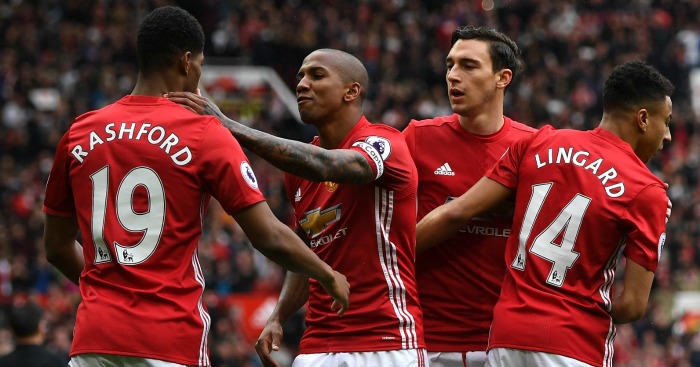 Marcus Rashford’s display in the win against table-topping Chelsea furthered Matteo Darmian’s belief that the Manchester United striker is destined to become one of the world’s best.

Sunday’s crunch Old Trafford encounter ended with Jose Mourinho getting one over his former club, running out 2-0 victors as the Premier League leaders failed to muster a single shot on target.

Ander Herrera was named man of the match having capped a fine display by adding the second and providing the first, which Rashford finished smartly after being put through.

It was the ninth goal of a campaign that has seen the 19-year-old struggle to replicate his remarkable breakthrough, but the forward has retained Mourinho’s belief throughout – with both featuring in our Winners and Losers.

The United boss expects Rashford to flourish next term and team-mate Darmian believes the teenager can become one of the best in the world.

“I think Marcus is a great player,” the Italy full-back said. “He is still very, very young and I think he is very important for us.

“With his quality, he can be one of the top players, one of the most important players, in the world.

“I think he is very good in every part of the game, he has a very good shot, movement, speed.

“Sometimes for a striker, it is a normal there is a not as good period (scoring goals) but I hope he continues like this, like today, because it helps the team to reach to objective.”

The team’s two-pronged objective is to secure a top-four finish and win the Europa League as the season comes to a frantic conclusion.

United remain four points shy of Champions League qualification through the league, but the manner of victory against Chelsea was a timely shot in the arm.

“We know our characteristic,” Darmian said. “Sometimes, of course, we draw a lot of games at home.

“We deserve to win a lot of games but sometimes it is not possible to win and we draw.

“We lost a lot of points at home but I think we have a chance with six or seven games to go, so still the possibility in our hands.

“This kind of game gives us confidence.

“I think everyone is concentrated for this end of the season because we know we play for two big opportunities.

“One is the Europa League and the second is finish in the top four because I think playing in the Champions League is a very good objective for next season.

“We have to fight and try to win as many games as possible.”

Having struggled for game time this season, Darmian earned praise from Mourinho after impressing on his third successive start.

The Italy international, linked with a summer exit, put the display down to an attitude that he says cannot waver with the Europa League quarter-final second against Anderlecht looming large.

“We know that it will be a difficult game but we play at home, in front of our fans,” Darmian said of Thursday’s second leg.

“We want to pass into the semi-final of the Europa League so we have to be focused, with the same attitude, same attention and same ambition as today.

“I think it can be a good night on Thursday but we have to try to win because it is the most important thing.”