Home Liverpool It turns out it was Darwin Nunez who was rebuffed by sixth-placed Manchester United! 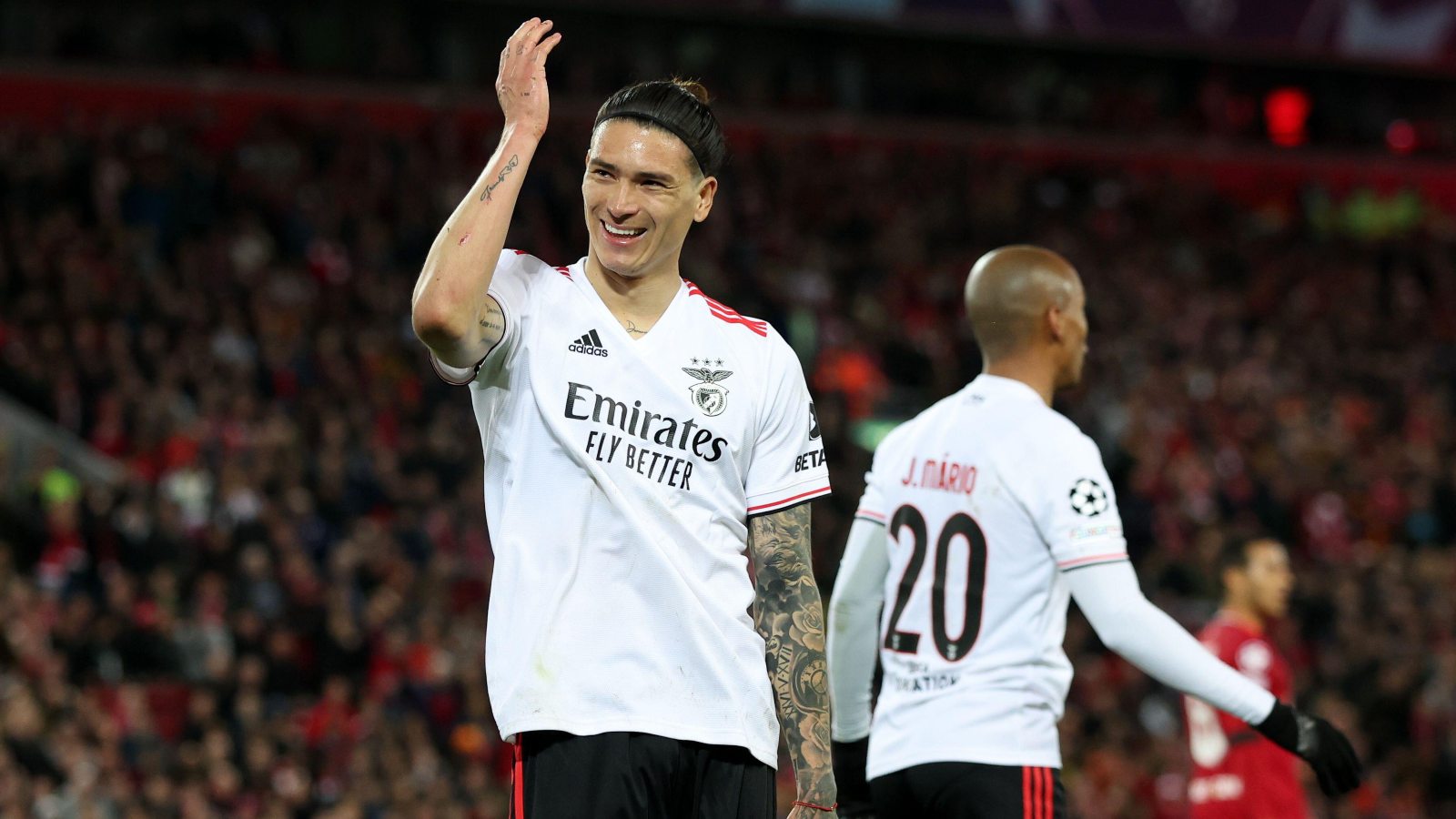 Nine hours after writing that Manchester United were ‘rebuffed’ by Darwin Nunez, the same journalist was back with a different tale.

Never fancied him anyway
Manchester United really have worked awfully hard to propagate the theory that Liverpool only had a free run at Darwin Nunez because United – who had just finished 34 points behind Liverpool and are bound for Europa League football – thought the Uruguayan was overpriced. Yes, the club who paid £50m for Fred were not about to pay an initial £64m for one of the hottest young strikers in European football.

We covered all this last week when United were keen to tell anyone who would listen that they would not get involved in a ‘bidding war’ for a player who would have chosen Liverpool anyway, but clearly they sensed some degree of cynicism because they are back to make it clear to MailOnline transfer man Simon Jones that actually, it was their decision to walk away. Definitely.

It’s results in a headline of ‘UNITED’S NO TO NUNEZ’ and a revelation that United ‘PULLED OUT’ of the running because they never fancied him anyway.

‘Manchester United pulled out of the race for Darwin Nunez after deciding against joining a bidding war with bitter rivals Liverpool, Sportsmail can reveal.’

Can you ‘reveal’ something that has already been claimed several times before? We giggled a little bit at ‘bitter rivals’ because, well, 34 points, but carry on…

‘Nunez is expected to complete an £85million switch from Benfica to the Reds on Tuesday, in what will be a club-record transfer. He will sign a six-year deal at Anfield.’

Except that’s not true, is it? He will sign an initial £64m deal that will probably rise to £85m but he will not become a club-record transfer this week. Indeed, the Mail repeatedly use the fee of £85m in their piece piped straight from Old Trafford and never mention the quite important point that he won’t initially cost that much.

‘United were in the running for the Uruguayan striker too but withdrew interest after deeming the asking price too high, rather than being rejected by the 22-year-old.’

For what’s basically a press release, it is beautifully written.

‘Sportsmail understands United were invited into an auction by the player’s agents but declined to engage, ensuring a move to Old Trafford was never an option for Nunez.’

Oddly, this is a rather different version of events to the one written by Simon Jones himself literally hours before:

‘The forward will sign after rebuffing interest from Manchester United and Newcastle United, with the overall financial package potentially reaching a club-record £85m.’

Did somebody get a phone call/e-mail? Nine hours after publishing those words, Jones was back and now Manchester United were the ones doing the rebuffing and Nunez was the rebuffed, while the ‘the overall financial package potentially reaching a club-record £85m’ became a straight ‘£85million switch’.

So it’s up to you which Simon Jones version you believe: that one of the world’s hottest young talents chose the Premier League and Champions League runners-up or that he was turned down by the sixth best team in England. It’s a tricky one.

Mind your own business
‘Manchester United Believe Liverpool Are Making A Mistake In Signing Darwin Nunez’ is the headline on SportBible that intrigued Mediawatch. Do they? It’s one thing believing that he is too pricey for their tastes, but quite another to think that Liverpool are making a mistake. It feels like they should probably mind their own business.

‘Manchester United believe their rivals Liverpool are making a mistake by signing Benfica forward Darwin Nunez, according to reports.

‘With Liverpool set to announce the €100m signing in the coming days, United’s hierarchy see the signing as ‘reckless spending’ – a somewhat ironic statement considering United have been guilty of doing exactly that in the past.’

‘Reckless spending’ is such a great quote that it probably should have gone in the headline, fellas.

Let’s check out these reports. From, erm…Anfield Central. It seems unlikely that they have the inside track to the thinking at Old Trafford but perhaps we are being cynical.

Of course, it turns out that it’s Anfield Central themselves who write that ‘United have become infamous for their reckless spending and view the striker as a player that is unlikely to deliver on the huge sum required to bring him to England’ but SportBible have gleefully gobbled up the quote from a Liverpool fan site and attributed it to Manchester United. Like you do.

And Anfield Central’s source? An ESPN report from five days ago that details the following:

‘United are prepared to add to their attacking options if the right player becomes available, but initial enquiries about Nunez saw Benfica quote a price tag of £100 million for the Uruguay international – a fee regarded as excessive for the 22-year-old.

‘Sources have told ESPN that Liverpool’s interest in the player is also subject to the Portuguese team lowering their asking price, but while United are ready to monitor Nunez’s situation, their immediate priority is to strengthen in midfield.’

What kind of a machine does that have to go through before you reach ‘Manchester United Believe Liverpool Are Making A Mistake In Signing Darwin Nunez’?

The mother of his child
Where a footballer goes, his partner generally follows, so The Sun get down to the important Darwin Nunez business:

She’s his wife and girlfriend?

‘MEET the stunning Wag of the man Liverpool fans are hoping will set the Premier League alight.’

Since when did MEET mean ‘ogle some pictures’?

But even worse than ‘Wag’ is this caption on an image of Lorena Manas:

‘Manas is a baby mama, having welcomed two children’

This is a term described by dictionary.com as ‘often disparaging and offensive’ with a definition of ‘the biological mother of a man’s child, usually not married to the child’s father or not in a relationship with him’.

It’s both misogynistic and offensive. So entirely in keeping with The Sun’s ‘football’ coverage, then.