Home Mediawatch What did Darwin Nunez do to get a red card? He turned around too quickly, the daft sod 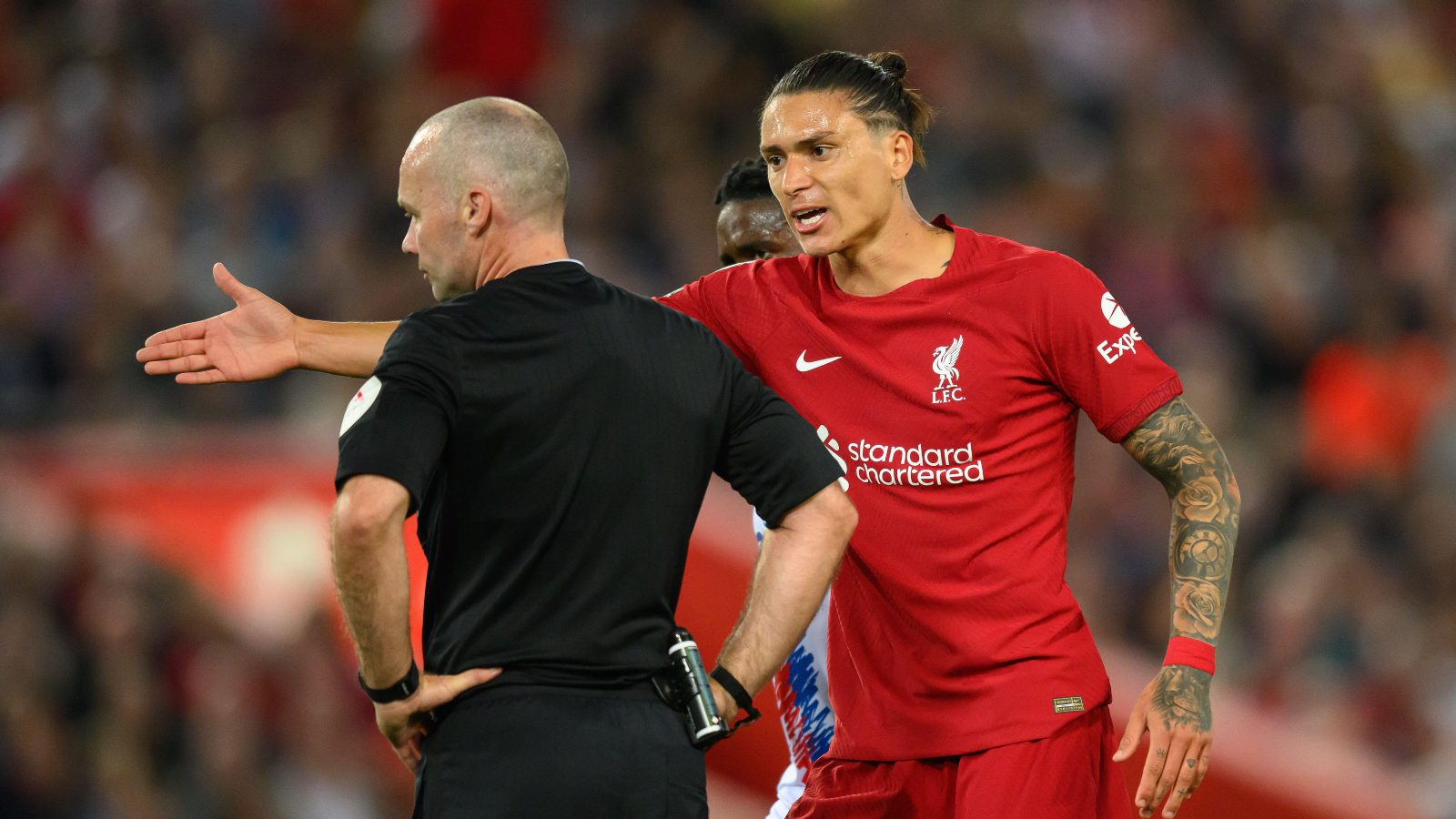 What a really ‘silly’ thing for Darwin Nunez to do. He was probably just frustrated that Liverpool were sh*t.

Don’t you just hate it when you accidentally headbutt somebody?
We can only really start in one place, and that place is a murky area between fan and journalist which has only got murkier as more outlets have basically become something akin to fanzines. Which is how you arrive here from the Daily Mirror’s Merseyside correspondent…

I mean, intensely stupid from Nunez, deserved red. No excuse, can’t lose control like that.

Yet still feel he didn’t actually mean to headbutt Andersen. Wheeled around so quickly, & didn’t quite realise defender was right in his face. Went to put head in yes, but not butt.#LFC

If anything, he just turned around too quickly, Jeff.

Frustration!
And David Maddock continued that theme in his piece from Anfield on Monday night, as he opened with statistics about Liverpool conceding the first goal far too often and arrived quickly here:

‘The pressure of trailing so often was painfully evident in the frustrated reaction of Darwin Nunez – guilty of missing at least three proper chances – when he placed his head into the face of Joachim Andersen, to be dismissed on his home debut.

‘Leaving aside both the stupidity of that, AND the overreaction of the Palace defender, it all came about because of the home side’s inability to take the many chances they created…and the pressure that brings.’

So, so much to unpick here.

Firstly, why was Nunez feeling ‘the pressure of trailing so often’ in literally his second competitive appearance for the club?

Thirdly, the ‘overreaction of the Palace defender’? Now Mediawatch has thankfully never been headbutted but we suspect we might fall down. At the very least we might stumble. It looks like it might smart.

And no, it did not ‘all come about because of the home side’s inability to take the many chances they created’. It came about because a man-child lost his temper and needlessly smashed somebody in the face with his head.

We’re caught in a trap…
Here’s the headline on MailOnline:

‘Darwin Nunez endured a nightmare Anfield bow as he fell into Palace’s trap with a STUPID headbutt. The meltdown was coming… he hasn’t yet got the technical mastery of Roberto Firmino’

How clever of Crystal Palace to set a trap that gave Nunez almost no choice but to headbutt a fellow footballer.

Crazy, stupid love
The Liverpool Echo do admit that it was a ‘silly, stupid and mindless sending-off’, though at this point we wonder why nobody is condemning Nunez for an act of violence rather than just being ‘silly’ and ‘stupid’, which makes a 23-year-old man sound like a child.

How ‘silly’ of him to headbutt a man in the face. The big daft sod.

‘Eight minutes into the second half, Joachim Andersen had taken umbrage with Nunez and prodded his finger towards the Liverpool striker before invading his personal space. Unwise, yes. But that still wasn’t sufficient reason for Nunez to then plant a headbutt on the Crystal Palace defender, who needed no invitation to hit the ground and ensure the inevitable sending-off.’

The idea that there is a concept of ‘invading personal space’ within a contact sport is simply wonderful. And when we say ‘simply wonderful’ we mean absolute bollocks.

And why had Andersen ‘taken umbrage’ with Nunez? Why, because he had literally just tried to headbutt him but missed. He really is a silly, silly man.

Defensive masterclass
Unlike some of the Liverpool fans masquerading as journalists, Jurgen Klopp had no doubt that Nunez was in the wrong with his headbutt, that did not stop some outlets claiming otherwise. This was Eurosport…

Read the gloom
The Sun website have moved on from Liverpool because the laws of Our Game decree that there can only be one crisis club at any one time and that club is currently Manchester United.

And their biggest story this giddy Tuesday?

‘CRISTIANO RONALDO cut a glum figure as he rolled through the gates for Manchester United training this morning.

‘And his Red Devils team-mates didn’t look particularly happy either as they reported for duty at the club’s Carrington HQ.’

Let’s imagine for a second the headlines if they had looked ‘particularly happy’.

Mediawatch did really enjoy the description of Ronaldo arriving ‘behind the wheel of a beefy Cadillac 4×4’. Suddenly, we are craving crisps.

How much is that alleged rapist in the window?
Onto more serious matters and we arrive at the front page of The Sun:

If Benjamin Mendy did indeed rape three women in 24 hours then he is simply an evil man. What the actual f*** has that got to do with his transfer fee? It’s as irrelevant as his waist measurement.