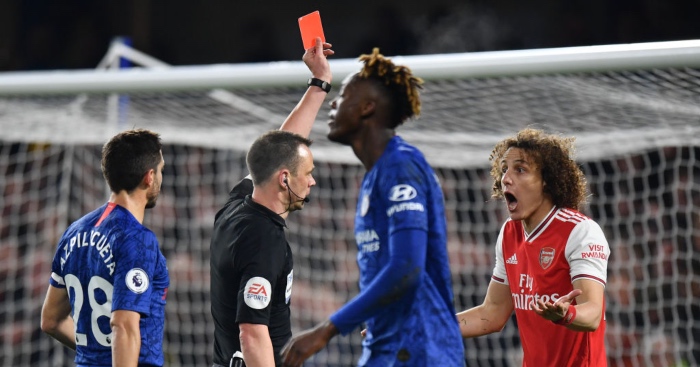 David Luiz says that some Chelsea staff begged him to return after he left the club for London rivals Arsenal.

Luiz moved across London as he joined the Gunners from Chelsea in the summer but had struggled to improve a porous backline in the opening months of the campaign.

The Brazil international has impressed since Arteta’s appointment in December and seems to now be settled at the Emirates Stadium.

However, Luiz admits that he misses the Chelsea staff he left behind at Stamford Bridge, who were trying to tempt him into a return when he initially left for Arsenal.

“I can be honest with you, the first three days or week was not easy to understand all the emotions or how I was feeling, because everybody knows my history with Chelsea,” Luiz told OTRO.

“I had this connection with everyone at the club. It was so massive and big and I was missing every single one.

“I give you the example of a gentleman there who is 75 years old. He was taking breakfast with me at the time when he had the opportunity.

“He was texting me: ‘I am still waiting for you here to take the breakfast again’.

“This kind of thing was so difficult for me, because I am someone that sees the heart as the most important thing.

“But then after that, in the professional way, I was saying: ‘It is a new moment for you. It is another big thing for you to do. Maybe if you stay in the comfort zone it is not going to be the best thing for you?’

“If you look at my history of life I was never wishing to stay in the comfort zone.

“It was a top decision. [Arsenal] are a big club. I want to make this club improve and to shine again. The first days were difficult but after that I started to adapt.

“Now I am so happy and I want to do big, big things with Arsenal.”